The material below has been developed within the Interreg North Sea Region (NSR) HyTrEc2 project is available for download.

HyTrEc2 is a bold project set up to advance the use of Hydrogen in Transport in the North Sea Region. The Interreg project has clearly defined aims and ambitions each of which can be expressed through a series of deliverables. Below are a selection of materials that highlight the previous, current and projected actions to make Hydrogen the fuel of the future.

One of the core pieces of work in part of work package 3, vehicle trials, is the creation of an overview of Hydrogen transport legislation and standards in the North Sea Region. This report reflects the variation in legislation across the North Sea Region when it comes to hydrogen. The report also provides a unified fuel cell electric vehicle guide which is compliant across the whole NSR, as well as a unified hydrogen transport guide compliant for the region. The report contains data cards per country which detail existing legislation around hydrogen vehicles plus production and distribution, these are extremely helpful managing to be concise and thorough! Below are links to the report itself as well as to a supplementary presentation delivered on the 8.12.21.

{Above is an Aberdeen City Council informational video which explains how to refuel a hydrogen fuel cell car.}

A large element of HyTrEc2 revolves around vehicles. The plan is to experiment by creating pilots of many different types of vehicles and with different fuelling options. Cars are the vehicles that often spring to mind first upon thinking about vehicles, but they are just a small segment of transport and its associated emissions. Hydrogen fuel cell cars have been available since the first HyTrEc. HyTrEc2 aims at increasing the use of hydrogen in all types of vehicles, most notably refuse lorries and large forklifts. A variety of methods are being employed to deliver Hydrogen vehicles: retrofitting; range extenders; simulations; dual fuel; and fuel cell vehicles.

Below is a link to a presentation by Gemeente Groningen showing a selection of their impressive and diverse fleet. It is a prime example of the steps being taken by HyTrEc2 partners to actively engage in the Hydrogen vehicle market.

In addition, to physical test vehicles HyTrEc2 is carrying out simulated tests on vehicles which do not exist in the NSP (Large Fork Lift Trucks are not commercially available). Below is a link to the findings of RISE's simulation, which was vital in proving Hydrogen's versatility as a fuel.

A further presentation below depicts HyTrEc2 process of actively engaging in the large vehicle market in order to promote hydrogen use. The presentation was produced by HyTrEc2 partner Aberdeen and Civitas PORTIS. HyTrEc2 has numerous partner projects across European Union, with whom presentations are often given to advance mutual aims.

Alongside acquiring and developing a vast array of different vehicles HyTrEc2 aims to:

Further documentation to present the additional deliverables is coming soon!

HyTrEc2 aims to undertake innovative demonstrative projects in Hydrogen production, storage and distribution. Hydrogen transport emits no CO2, however the production of Hydrogen often does. Water Electrolysis production of Hydrogen has the potential to be entirely green, however at present the cost is too high to be viable. HyTrEc2 aims to produce Hydrogen with a low/zero Carbon footprint at a significantly lower price. Alongside production, HyTrEc2 seeks to involve itself in improving the storage and distribution of Hydrogen, which is particularly important given that much of the North Sea Region is made up of large rural swathes interspersed with towns and cities.

{Below is a tour of the station that provides some more detailed information.}

‘In late 2019 Aberdeen City Council commissioned consultant Element Energy to establish whether there was a business case for Aberdeen to become a large scale producer of cost-competitive green hydrogen and whether there would be commercial interest from the market in establishing Aberdeen as a “Hydrogen Hub”. The study, funded through HyTrEc2 with Opportunity North East and Scottish Enterprise evidences that the Hydrogen Hub will be key to unlocking a host of potential economic and environmental opportunities for the region with public sector support. As a result the Council has received significant levels of interest from the Scottish Government Energy Transition Fund to facilitate its deliver with the Council committing further funding to ensure its successful establishment.’

Supply side inefficiencies are one of the largest obstacles to the expansion of the Hydrogen sector, HyTrEc2 aims to address this. The development of an effective supply chain in the various components of Hydrogen transport is a key element in the reduction of costs. A supply chain is needed for the production, storage and distribution of Hydrogen as well as the maintenance of vehicles. HyTrEc2 intends to establish an effective supply chain network by engaging with various companies. As training is such a key element in supply chain development, HyTrEc2 will create courses for various actors to ensure a blossoming Hydrogen sector.

{Above is the mapping report carried out by Pale Blue Dot, and below is a diagram which visually summarises the findings.} 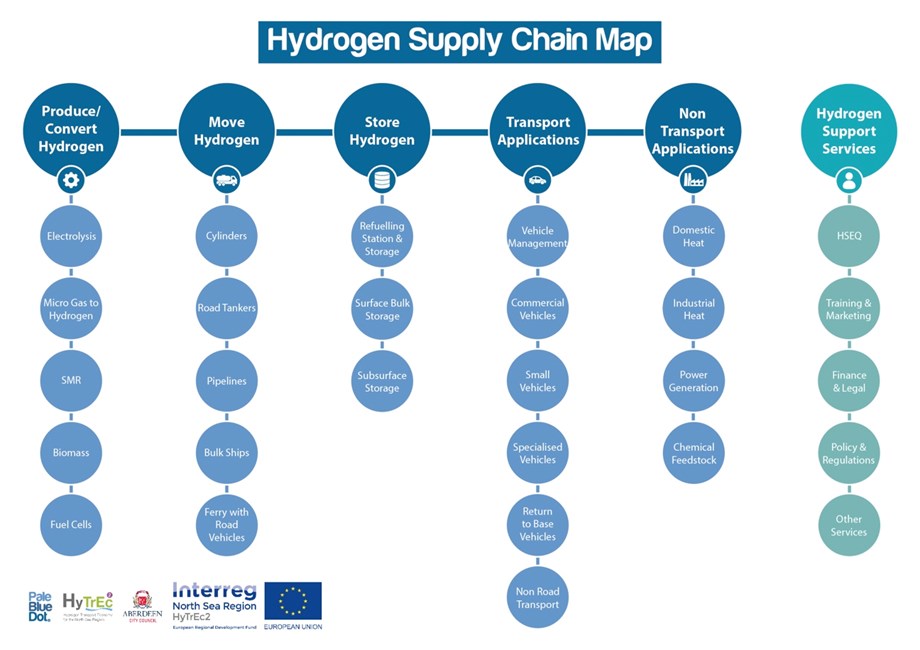 One way in which the HyTrEc2 partners are enabling supply chain development is to provide information on their own journey into the hydrogen sector. Aberdeen City Council has produced an educational booklet, which outlines the different ways the City has incorporated hydrogen into transport and their plans for expansion.

This booklet was created by HyTrEc2 in tandem with the Smart Hy-Aware project. The booklet has been distributed to local learning institutions in Scotland as an introductory case study on hydrogen deployment in the region.

A key aspect of strengthening the supply chain and providing training content is understanding the current situation, which was achieved through the comprehensive HyTrEc2 Skills Framework report developed by atene KOM:

This skills framework will help craft further hydrogen training moving forward: noting what is available, what is needed, and from whom. The report also contains a sample module.

Further tasks will be carried out in order to expand and strengthen the supply chain of Hydrogen, including but not limit to:

Materials relating to these tasks is coming soon!