The IoT Registry offers transparency to citizens, visitors and entrepreneurs by providing an online registry of IoT devices.

It tends to remain unclear for citizens, visitors and local companies what purpose an individual IoT device serves in the public space. When spotting a new "strange-looking" device in the public domain in your local neighbourhood, it takes an expert to derive from merely how the device looks whether it is or is not a smart device, the purpose it serves, who owns it, whether it is or is not storing, processing, analysing, sending data, to which degree that data is personal data … The digital abilities it does (or does not) possess are in no way visible to the eye, some devices literally representing a "black box". Therefore the presence of smart and technologically advanced devices in local neighbourhoods raises worries and uncertainties, leading to negative feelings of insecurity and surveillance. This does not line up with the social benefits that IoT project leaders wish to achieve when improving public services in cities.

Simple questions can remain unanswered, such as:

Could its data in fact be useful for me as a citizen, visitor, company or city service?

While GDPR already requires all cities to make available a public registry on personal data processing, such initiatives typically focus on (intangible, invisible) processes of handling the personal data rather than the (tangible, visible) individual devices found in public spaces.

The IoT Registry addresses this challenge and aims to offer more transparency to citizens, visitors and companies, by providing an online registry of as many IoT devices as possible.

It answers basic questions like: Why is the device here? Who installed it here? And who has access to the data? The application leads the citizen to information related to the device that is available on various communication channels of the city, the project that the devices belong to, or its responsible owner.

The public registry visualizes metadata of IoT devices on a map. By clicking the different symbols on the map, the citizen is able to consult publicly known information about the IoT device.

The first version of the IoT Registry was developed in Amsterdam. Citizens can explore cameras, camera areas, sensors, beacons and smart traffic information devices in Amsterdam at its website here. 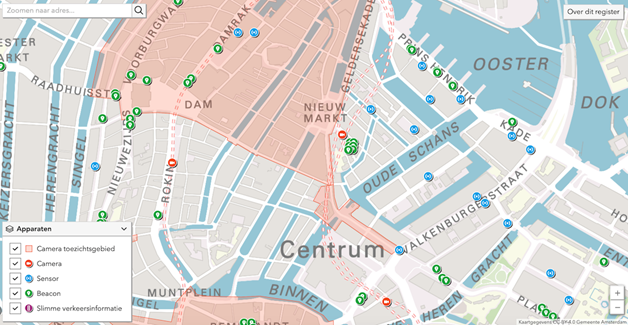 After Amsterdam released the first version of the IoT Registry, the teams of Ghent and Aarhus started to co-develop the application as part of the SCORE (Smart Cities and Open data REuse) Interreg project.

As a co-developing team, they made available different common components for any city:

In parallel, the cities in this working group also started developing their own derived local version of the IoT Registry, in order to better align with the specific needs of each city. 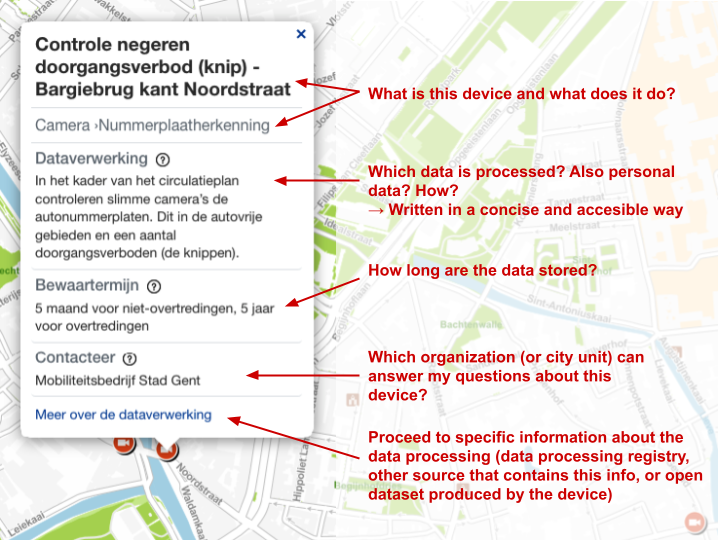 The second version of the IoT Registry is implemented in Ghent as a transnational co-developed software application, at the same time the cities Aarhus and Hamburg are adopting the same concept in their cities.

How does it work?

As co-developing cities, we provided the starting point for new cities that would like to introduce their own IoT Registry. The application was developed in such a way that every city can smoothly:

To get started with the IoT Registry, a bit more in detail, you would: