Use QR codes to follow or report city objects and set up IoT sensor proof-of-concepts.

The QR Toolkit is one of the open source toolkits being developed in SCORE, the idea for this application originated from two challenges:

1. As innovating cities, we want to set up various experiments with IoT (Internet of Things) sensors to improve public service delivery. In the ideation phase for the development of new applications, we require quick ways of testing and validating initial ideas, before actually investing in actual IoT equipment, configuration, development and maintenance as part of larger pilots. One approach to kickstart new initiatives as proof-of-concepts is to intentionally fall back from sensors to QR codes and mobile devices. With access to user friendly tools, city personnel can generate QR codes, print the QR code on a physical carrier, easily attach the QR code to a city object, then set up contextualised digital workflows ("Which actions, triggers, notifications, …  do we want to make available for city personnel and citizens after they scan the QR code on a certain location with their mobile device – smartphone or tablet?). Such a reusable toolkit would allow city personnel and innovation labs to set up test cases to prove/validate a certain technological idea for a new application in a matter of days, rather than having to engage in complex and lengthy procurement processes. The insights and outcomes gained together with end users could feed a business case or service design analysis, in preparation of the follow up iteration of the solution: a larger IoT pilot or implementation. The SCORE partners believe that part of the lessons to be learned about IoT can already be learned with such low level prototypes

2. In some cases, it is not feasible to equip city property with sensors or physical interactive features. The sheer amount of objects can be massive (eg. thousands of road signs) to justify the cost (purchase, maintenance, batteries, ...), or for movable objects in the public space the risk of theft could be too high. Still, to make "dumb" objects smarter, to enable data collection and eventually integrate more objects in the flow of shared data in a smart city, QR codes could be considered as the alternative to sensors. In combination with a unique QR code per item, any mobile device functions as a bridge to IoT-like features, such as geolocation, accessible citizen reporting and interactive contextualisation.

QR codes (QR stands for Quick Response) have been around since 1994. In cities, we have seen them used mainly in communication as offline referrers to online content. They easily provide a link to online informative web pages, forms or web applications. Over the last few years however, we have also seen mobile devices starting to widely support QR codes "natively" (without the need to install any specialised app) through their cameras. More advanced QR applications are also being adopted widely by the general public in many countries (eg. to facilitate payment transactions among friends, family and in small businesses). This resulted in revived attention for QR code based applications. This open source application aims to give city services and innovation labs access to these new benefits of QR codes.

The innovative approach we explore in this SCORE solution is to use a QR code not as a static hyperlink but as a generic, extensible and reusable starting point for a variety of city services and citizen workflows. Using technologic components such as simple buttons, simple e-mail triggers, simple interactive elements (small forms), API calls, different custom workflows can be set up for any QR tagged object. Flexibility is built in so these workflows can relate to different units and their respective processes. The idea is to combine and centralise different purposes for one and the same tagged item through the QR code. Rather than merely function as an identifier to be "scanned" at a specific moment in one specific city service process, the QR code is abstracted and seen as a common identifier or access point to which different actions can be attributed in different service delivery contexts. The idea is that the QR code is the starting point (and not a mobile app) for the city item it represents, for various users and various uses.

Use cases by SCORE partner

A use case that is implemented in Bradford is QR codes on public waste bins. Such QR codes can serve multiple purposes:

In Ghent, one of the use cases is the tracking of movable road signs. Again, the same QR code can serve multiple purposes for different stakeholders and different city departments can be involved:

The use cases developed so far for this toolkit prove that a generic toolkit enables city services to use QR codes to bridge offline physical items with digital information, citizen reporting, city service delivery processes, ... and collect highly relevant data along the way.

The developers aim to provide the toolkit in such a way that all mobile features are provided in a web browser, avoiding the need to and substantially lowering the threshold for citizens and city personnel to test and adopt these new QR code based workflows.

Among the cities working with QR codes in this SCORE working group, Ghent and Bradford have already developed their first iterations. You can find screenshots below. 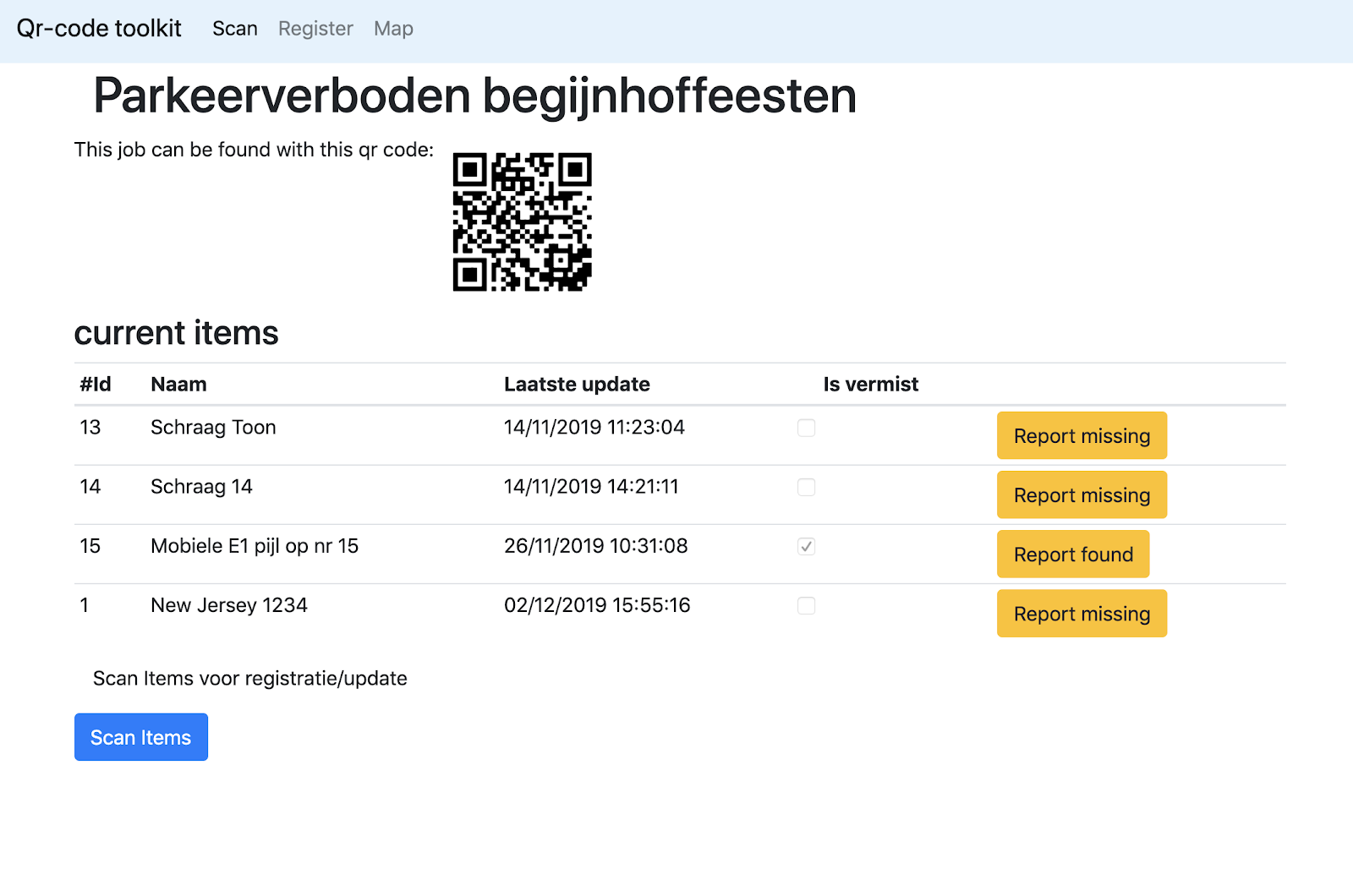 The long-term ambition of our work on the QR Code Toolkit is that thanks to its open source availability and the shared best practices of the co-developer and follower cities, any European city can use it.

The application's source code is available as a Github repository, so its development can be followed closely and improvements can be suggested.