Local farmers, fishermen, birdwatchers and many other local stakeholders were gathered in Ringkøbing for a conference day on the environmental status of Ringkøbing Fjord and possible actions in the catchment. Approximately 60 stakeholders from 30 different companies/organizations attended the conference day.

The agenda of the conference was to elaborate on the environmental status of Ringkøbing Fjord where key facts, that have not been publicly available for a long time, were presented. The intentions were also to get local input and knowledge from the users of the fjord towards getting a more comprehensive understanding of the environmental status which is an essential part of the concept of local based water plans that SEGES are testing in Water Co-Governance project.

In order to gain more locally based knowledge from users of the fjord, a chairman of a local fishermen union and a Senior Researcher were also invited to give a speech on respectively the tendency of the fish catch statistic and the bird population in the fjord. Moreover, a speech was given on how the sluice in the fjord is regulated, which is important as the sluice regulates the salinity in the fjord. The level of salinity is essential for the presence of types of mussels that contributes to a better ecological state by filtrating the water.

Moving back into the catchment

A new aspect of the locally based water plans was to elaborate on the possibilities of making actions in the catchment. An expert on the topic explained that the catchment characteristics meant that large wetland projects were the dominant possibility in order to reduce nitrate from the streams and before it ends up in Ringkøbing Fjord. 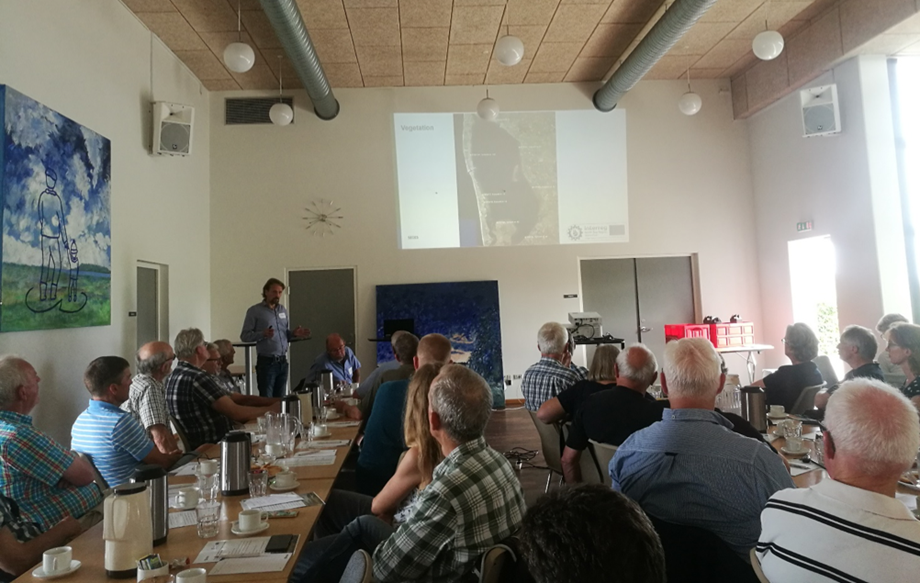 Many interesting questions were asked, and there was a lot of good feedback throughout the meeting. One example was that the local fishermen noticed a significant amount of sea lettuce (which can be used as an indicator for nitrate level) in the fjord, which the Senior Researcher did not notice when bird population was examined. An explanation was given by a paddleboarder of the fjord, who could tell that sea lettuce was scarce in shallow water but very abundant in deeper water. Another good input was from a captain that could tell how the secchi depth was possibly influenced after acquiring a new boat that was able to sail in more windy weather.

The presentations raised many interesting questions, debates and people got the chance to get a better understanding of the complexity of the fjord and the different interactions within the ecosystem. Moreover, a detailed report with environmental parameters like oxygen, secchi depth, eelgrass, nutrient level etc. in Ringkøbing Fjord is planned to be published in the autumn to come. The format of the report is inspired by another report published by SEGES on the environmental status in Skive Fjord that was published last year.

41 attendees answered a survey after the conference day with following questions: