How it works: ventifoils 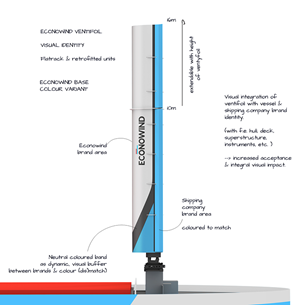 The Ventifoil is a non-rotating suction wing with vents and an internal fan (or other device) that uses boundary layer suction for maximum effect to generate thurst for the ship.

The Ventifoil® is a wing shaped element using modern innovations in aerodynamics creating high propelling force relative to its size. Smart suction is integrated in the wing, resulting in double the force of the Ventifoil while reefing when needed.

The advantage of placing the Ventifoils solid on a vessel is mainly the possibility to use bigger foils. Bigger foils are able to produce much greater forward force and thereby fuel savings.

The Ventifoils® are able to fold and rotate around it’s own axis, thereby it can be always made possible to acces the ships cargo hold.