11 August 2020 - Published by Jens Uvijn
The geophysical tTEM mapping tool was developed within TOPSOIL and has been tested for different purposes at different sites. The tests have shown that tTEM performs very successfully when used for investigations of polluted sites in the Central Denmark Region.

The tTEM-system is a towed, ground-based, transient electromagnetic system, designed for detailed 3D geophysical and geological mapping of the shallow subsurface (0-80 m) in a fast and cost-efficient way. The detailed 3D coverage is obtained by fast data repetition and a small line spacing of typically 10-20 m. This results in a dense lateral data spacing and it is possible to construct geological and hydrogeological models with a resolution suitable for the scale, typically needed for polluted-site investigations. tTEM is quick to deploy and easily managed in the field. It consists of an ATV, carrying the instrumentation and towing the transmitter frame and the receiver coil. The transmitter and receiver coils are mounted on sleds for a smooth ride over rough fields/terrain. 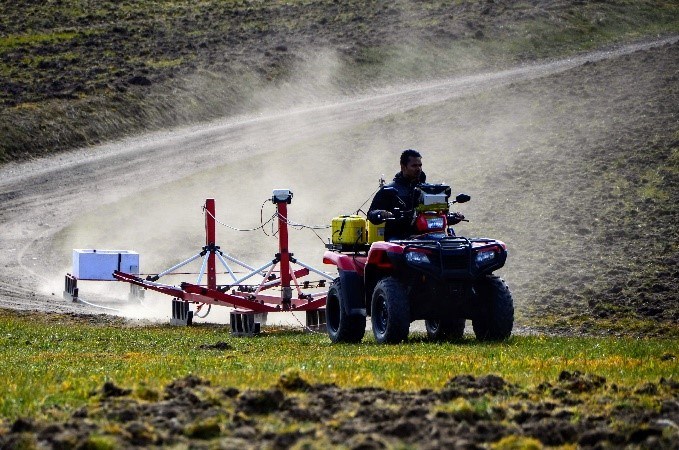 The tTEM system in action

The idea was that tTEM should be used as a part of the toolkit normally used for polluted-site investigations, and that it would be especially useful prior to the traditional investigations. The data from tTEM can support the planning of the investigation programme. Borehole locations can be optimised, and the number of boreholes can be reduced, thereby improving the quality of the investigations while at the same time making them more cost-effective.

In the Central Denmark Region, tTEM has been applied at three different sites where principal groundwater resources are threatened. It has been evaluated how the new geophysical information has changed the investigation programmes regarding content, workflow, and results (e.g. change in number of boreholes, cost-efficiency, time spent, and robustness of the resulting risk assessments). A GIS analysis has been made to calculate the number of polluted sites where it will be possible to map with tTEM in the region.

Three case studies were investigated with the use of tTEM as a part of the normal investigation programme. 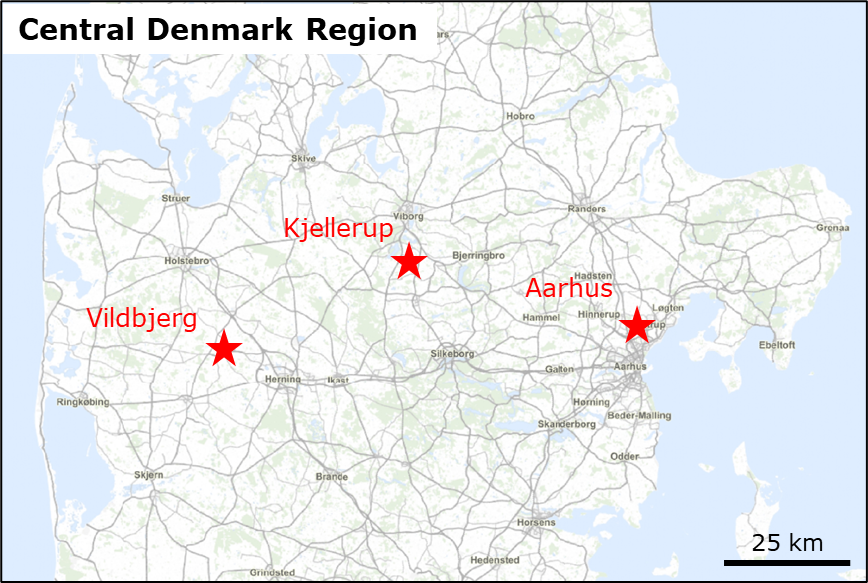 Map of Central Region Denmark and the three investigated sites.

The Aarhus site covers a former landfill, located within the catchment area of two important well fields supplying drinking water for the community of Aarhus. The results of the tTEM mapping at the Aarhus test case showed that the geology in the area was complex with several small, distributed, glacial aquifers. The internal connections between the aquifers were difficult to assess, and thus also the exact pathways of the groundwater flow. The tTEM results were used to guide and optimize the siting of the boreholes, the major (and most expensive) part of the subsequent investigation programme. The exact position of the landfill was not known in detail, but it was possible to delimit its extent in the tTEM data.

The pollution at the Vildbjerg test case originates from a farm previously operated as an agricultural contractor. It was discovered as a pesticide pollution of the uppermost groundwater aquifer, but the lateral distribution was unknown. The pollution was expected to follow the overall flow direction of the groundwater towards the well field of the local water works only 400 m from the site. 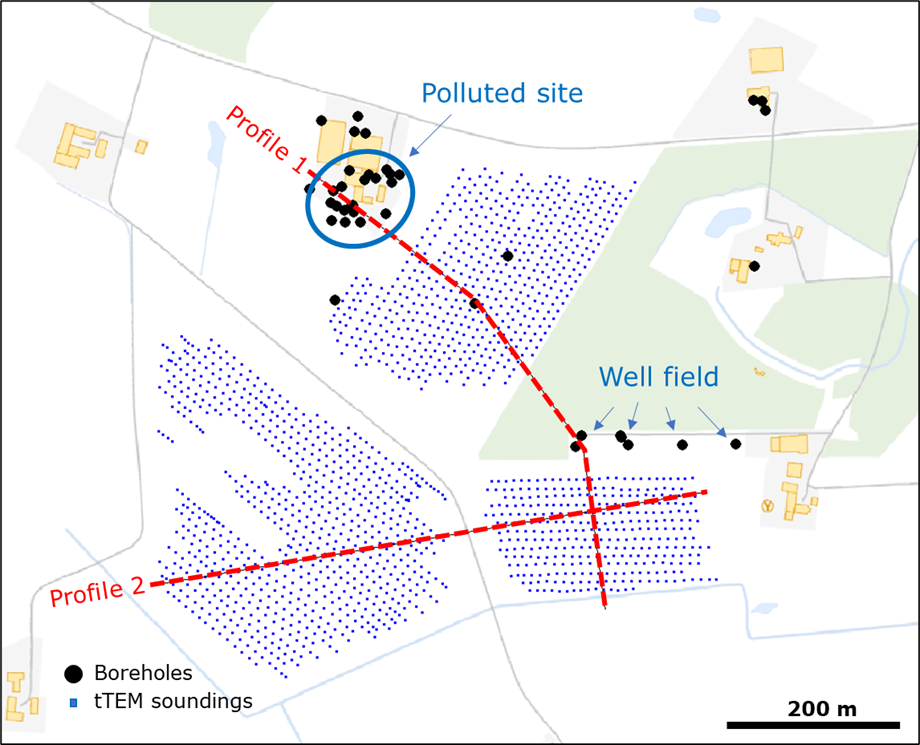 Map showing the area around the polluted site and the well field. 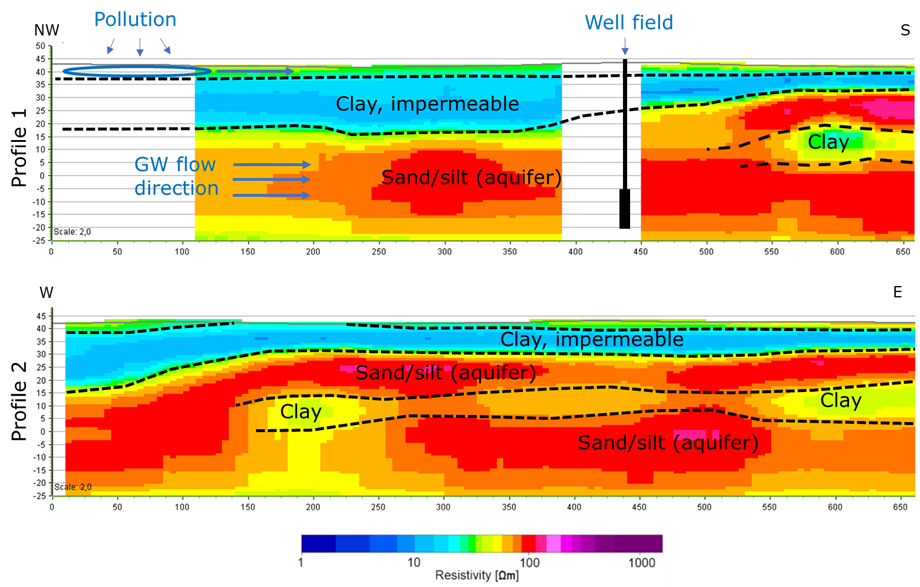 Two profiles across the area surrounding the polluted site. tTEM-data shown by colour (resistivity) and geological interpretations indicated by dashed lines. The location of the profiles is outlined on the map above.

The results of the tTEM survey are shown in the two profiles above. A continuous clay layer, between 5 and 25 m thick (low resistivity), appears to be present everywhere above the main aquifer (high resistivity). The exceptionally low resistivity of the clay layer indicates that the clay content is high and that it can be considered impermeable. Boreholes in the area verified the existence of the clay and that the clay is very fine-grained. Based on the tTEM data, it was possible to assess the risk of the well field being polluted as low. The pesticides will not be able to leach through the clay layer and enter the main aquifer and will not threaten the well field abstraction. The number of boreholes in the following investigation plan was reduced and the credibility of the risk assessment was improved.

The pollution at the Kjellerup test case also originates from a farm previously operated as an agricultural contractor. There was a risk that the pollution could affect the primary groundwater resource of the area, which is situated in two large buried valleys. The tTEM survey here showed that the valley aquifers were partly protected by a capping clay layer at a depth of about 25 m. This layer, however, did not cover the valleys entirely, and it was believed that there might be a shortcut between the polluted shallow aquifer and the valley aquifer along the flanks of the valley structures. The data also showed that the area to the east of the site was protected by a clay layer at terrain, whereas the area to the West showed high vulnerability because only sandy sediments were found in the shallow part here. The investigation programme was changed after we collected the tTEM data. The number of boreholes and the total drill depth was significantly reduced. The siting of the investigation boreholes was improved, providing a better basis for the final risk assessments.

We have shown that if tTEM data can be acquired in the close surroundings of a polluted site, the data will provide important information about geology and hydrogeology. Vital knowledge is gained and the chances of making proper assessments of how the pollution is dispersed in the groundwater system are improved. With tTEM data, we are informed about the architecture of the subsurface and the properties of the sedimentary units/layers.

When working with polluted sites and threats against groundwater, it is essential to know if the threatened aquifer is covered by a widespread and consistently sealing and protecting clay layer, and whether this clay layer has shortcutting holes or cracks. tTEM has proven successful in determining the architecture and properties of such protecting clay layers.

Thereby, the results of polluted site-investigations become much more robust and the uncertainty related to risk assessments is significantly reduced. If the same level of credibility in the risk assessments should be reached by drilling boreholes, a huge number of boreholes would have to be drilled.

The testing of tTEM in these three cases shows that there is a huge potential in saving on the number of drillings. For the Kjellerup test case the difference between a planned investigation programme (prepared prior to the collection of tTEM data) and an updated programme (prepared after the collection of tTEM data) was considerable. Whereas the original plan was to drill a total of 285 m with 23 individual boreholes, the updated plan was to drill only 91 m with 6 individual boreholes. A total of 194 m of drilling was saved, amounting to about 19,000 EUR. This amounts to approximately three times the cost of the tTEM survey.

The implementation of tTEM as a part of the investigation programme will reduce the budgets used for site investigations and will simultaneously improve the validity and quality of the resulting risk assessments and/or subsequent remediation actions.

Applicability and accessibility of tTEM

One challenge for the tTEM system is to access some of the areas to be mapped and to collect undisturbed data in urban areas. It is impossible to acquire useful data in areas with many cultural installations such as powerlines, fences, etc. Data will be infected with noise and thereby become useless. In forested areas, it is only possible to collect data along tracks and roads. This will not provide a full resolution due to a high spacing between the collected data. 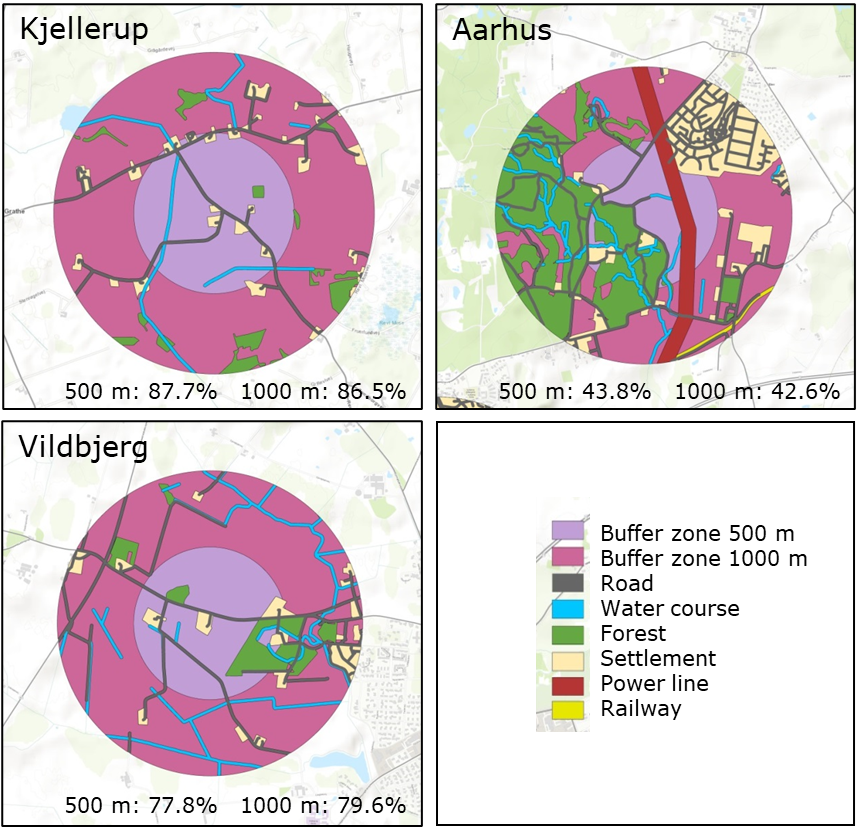 Results of the GIS analysis for the three polluted sites. Data cannot be acquired and used in urban areas, along roads and powerlines, or in forested areas. The size of the accessible areas (where it is possible to apply and use the tTEM method), are shown within two different circular buffer zones (500 m and 1,000 m). Results range between 42.6 % and 87.7 % for the three sites.

Since most of the registered polluted sites in the Central Denmark Region are situated in or close to urban areas, a GIS analysis was made to achieve an estimate of the applicability of tTEM for polluted site-investigations. It was considered that it must be possible to cover more than about 50% of an area around a polluted site with the tTEM equipment before it is relevant to use tTEM.

A total of 318 registered polluted sites are currently waiting to be investigated further in the region. The results of the GIS analysis showed that it will be beneficial to use tTEM at between 1/3 and 1/2 of all the sites in the Central Denmark Region (between 116 and 152 sites).

Implementing the use of tTEM

After using tTEM at the three test cases, we can conclude that tTEM is a valuable tool – especially when used at sites in rural areas. As part of TopSoil, we conducted interviews with two of the consulting companies normally used for investigations of polluted sites in Denmark. The results show that the consulting companies are currently challenged to apply the method. The method is technically advanced and full utilization requires expertise with the specific geophysical technique, but it also requires employees with experience in using the collected data and bringing them into play correctly. Close interaction between different specialists is required, and those specialists are often not employed in the same department. In order to achieve full implementation of the tTEM method, it will require that consultants gain experience and expertise in collecting, processing and interpreting/applying data. An increased focus and a greater demand for the method is likely to help overcome this barrier in the long run, and the method will become a natural part of the toolbox in the future.