01 March 2021 - Published by Deirdre Buist
In November 2020 Surflogh partners in Mechelen participated in a three-month parcel delivery pilot, appropriately named R!sult. Using a fully loaded electric delivery van as a mobile ‘micro hub’ to enter the city centre, even more goods could be redistributed and delivered by electric cargo-bikes and trailers. Through a green logistics lens that is a real result!

There are lots of experiments and pilot projects testing sustainable solutions for urban logistics, but many focus on local problems and don’t build on current insights. That’s where R!sult – the Responsive Sustainable Urban Logistics project - is different! Together with the Vlaams Instituut voor Logistiek (VIL), this pilot was set up to run in 6 cities with 22 companies. It expands further on an operable logistics process model that can be widely implemented.

Once again the ECOkoeriers have a key role in Mechelen. Up till now these cargo-bike couriers did their rounds from the ODTH City Hub in in the south of the city. Now, an electric delivery van has been deployed as a micro hub where the couriers can pick up faster and deliver larger loads to retailers in the centre. Surflogh partners in Mechelen are already intensifying this initiative and exchanging experiences within the consortium

Inneke Vos of ECOkoeriers Mechelen. “Business is really booming these days. There is a clear demand to deliver larger items, such as furniture, to the inner city. The cargo-bike has its limits in terms of capacity but by using the electric delivery van (supplied by AutoPartners) as a nearby micro hub we can now deliver in two or three runs without any time loss.”

The City of Mechelen has implemented the pilot in cooperation with VIL and is positive about the results so far. “This really boosts our city’s living environment while ensuring efficient deliveries to retailers at the same time,” says Vicky Vanmarcke, City Councillor for Mobility. The project is also supported by the Flemish Agency for Innovation and Entrepreneurship (VLAIO). 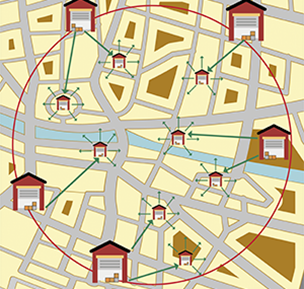 City administrations and their support policies play a major role in the transition towards a more sustainable and green supply chain. Within the framework of Surflogh, the City of Mechelen has been able to provide such support to test a wide range of green logistics initiatives – including the implementation of the R!sult model. Cooperation and knowledge exchange are the magic words for further development -  allowing for a healthy degree of business competitiveness where possible.

Other projects on sustainable deliveries in Mechelen

Participants in the R!sult pilot: