SURFLOGH in Action & Pictures - it's the movie!

16 September 2022 - Published by Deirdre Buist
Sustainable URban Freight Logistic Hubs -SURFLOGH. It's a bit of a mouthful when explaining to a wider audience what this Interreg North Sea Region project is all about. Actions speak louder than words, and a picture paints a thousand...so we made a movie!

This film is the SURFLOGH story in a nutshell - told by those working in the project. Veerle De Meyer, representing the City of Mechelen kicks off: “European cities have seen a huge revival over the past 30 years, as more people want to live, work, shop and enjoy all that city life has to offer. Online consumerism has also rocketed, adding to the enormous pressure on logistics, both in the cities and neighbouring regions. SURFLOGH has been testing greener, smarter and more efficient solutions for urban logistics to reduce CO2 emissions and contribute to a more livable environment."

Basically the project is all about connecting the stakeholders involved in city logistics to jointly create and trial innovative  solutions for the logistics challenges our cities and the surrounding environments are facing. The consortium has supported many pilot initiatives, testing and evaluating in practice.

In the historic city centre of Groningen, for instance,  logistics traffic puts an enormous pressure on public spaces. "In SURFLOGH we’ve worked together with businesses to investigate how we can use cleaner and friendlier vehicles for deliveries," says Sjouke van der Vlugt of the Municipality.  Several short pilots have been carried out in Groningen to test different aspects. The Logistics Focus Group, with representatives from relevant sectors and associations has proved invaluable in terms of communicating quickly and effectively with all stakeholders."

Getting from A to B in Groningen city centre

Understanding the logistic flows between businesses and consumers is essential, according to Peter Jackson of SEStran in Edinburgh. "We can thus encourage a switch  to building a greener logistics system and developing the matching policy.  SEStran focusses on improving access and connectivity whilst also supporting economic growth and business efficiency. Working with this transnational partnership has really helped us deliver on that ambition," he continues.

All SURFLOGH partners are committed to a zero-emission future, in line with Europe's ambitions for 2030. Swedish partner Jonas Widerstrom from the City of Borås  explains their apporach: “During the course of the SURFLOGH project, we’ve developed and tested a number of solutions for a more efficient goods transport, including recycling material. But perhaps the most important result - and all partners agree - is that we have managed to place city logistics on the agenda for city development. The connection between logistic operations and the quality of the street environment  is now the clear and acknowledged.” In the SURFLOGH film, Jonas also highlights one particular  trial with autonomous deliveries in their city - HUGO!

The consortium has run quite a range of  pilots for last mile deliveries -  with Mechelen in the  lead with their Eko-koeriers and hubs,  parcel lockers at various locations, a sharing scheme for electric vehicles and so on. Besides being able to exchange experiences with the other partners and share new ideas, these trials have all supported the design of new policies using bottom-up, ‘street-wise’  experience.

City Logistics doesn’t stop at the city limits.  Drenthe is not ‘urban’ but  faces the same challenges. Rolf Meerbach from the Province of Drenthe (Lead Partner) is really pleased with the project's progress. "SURFLOGH has given us the opportunity to test  freight hubs at the edge of the city, and to explore more ‘last mile’ solutions. The delivery lockers we saw in Mechelen inspired us to trial the concept too. We copied their idea and placed these at  a number of transport hubs. With success. We’re also testing the feasibility of ‘cool lockers’ for perishable goods and are very excited about investigating drone deliveries with our Scottish colleagues." 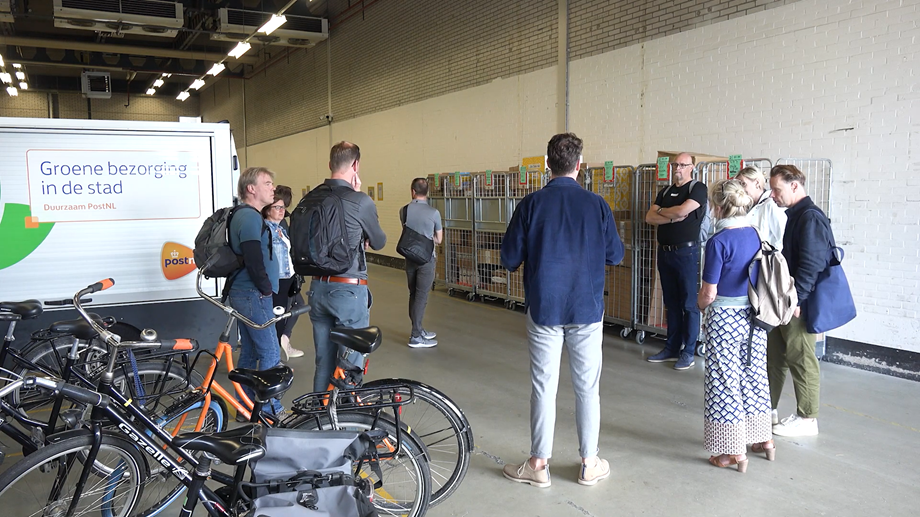 Partners visit a dleivery hub at the outskirts of Groningen

The partners have also jointly developed five practical roadmaps for implemention which can  be used to guide other cities or regions in the North Sea Region and beyond. The business feasibility of these new urban logistics solutions has been central. Using a specific business model framework and the expertise of Dr. Jonathan Cowie from Napier University in Scotland, the SURFLOGH partners identified different  examples and formats that confirm economic viability after the initial pilot phase. That's what we call 'SURFLOGH in Action'.

Now, enough words. As we said, actions speak louder  and a picture can paint a thousand...

So take a moment, grab a coffee and watch the SURFLOGH story!

"A smooth and sustainable logistics system is essential in modern life. SURFLOGH has made it possible to trial and test new ways of getting goods from A to B, as cleanly and efficiently as possible, with minimal impact on the environment. The results form a valuable legacy for other cities and regions with the same ambitions."

In the end it’s about keeping our cities livable, improving air quality - and the quality of life, now and  for future generations.

The SURFLOGH film was produced in cooperation with JulesMedia, with many thanks to Freek Lagerwiej.