Good Goods - on the road in Boras

16 December 2019 - Published by Deirdre Buist
Why let heavy fossil fuel trucks drive in and out of town with goods and waste, when smaller vehicles, powered by electricity or biofuel, can do the job so much more smoothly? Just as the city centre is in full swing for the Christmas rush, the green-striped vehicles of the Surflogh pilot Good Goods hit the roads in Borås.

The aim of Good Goods is to reduce exhaust emissions and noise in the centre, make the streets safer and improve the working environment. As Ulf Olsson, Chairman of the Municipal Board, says: “We’re simply creating a more enjoyable centre for everyone.”

How does it work?

Over the past few months the last loose ends have been tied together.Every day, large vehicles drive into the centre with goods for shops and restaurants. This traffic is heavy as different goods come with different transport. This is where Good Goods comes in. First, the goods are coordinated and repackaged on the outskirts of town, then more flexible, environmentally friendly vehicles  drive into the city centre and deliver the goods. In the same way, waste is collected and driven out of town.

“The transport industry is facing a major transformation. We must find efficient, smart and sustainable solutions where we consolidate transport and drive fossil-free. Now, through collaboration, we have found an economically sustainable business model for the project that is commercially sound,” says project manager Sara Thiel.

Collaboration on all levels

Collaboration is the key, on a local regional and international level. Good Goods is an EU-funded project that is initially run by a number of partners; Borås City, Borås City, CiB (Centre Properties in Borås), Interreg North Sea Region Surflogh (EU) and the Västra Götaland Region.

Property owners, shops in the city and several carriers have been involved in the work. Those responsible for the transport are Stures Åkeri, who runs for DHL and Borås Energy and Environment. Smart cargo loading of environmentally friendly vehicles is the future, both in Borås and in other cities. 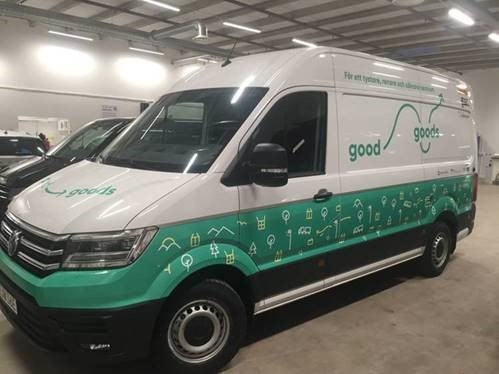 After a 12-month trial period, the project will be evaluated and further developed to full scale. The City of Borås strongly believes in this solution and is keen to expand both the area and services offered.

Have you seen the Good Goods video?

Take a look, and we’ll keep you updated on the pilot’s progress.