Cargobikathon Groningen - and the winner is…

07 April 2021 - Published by Deirdre Buist
Last month Surflogh partners at the City of Groningen chartered the help of students to create some imaginative, successful possibilities for using the cargo-bike more in the inner city. Since deliveries in the inner city must be zero emissions by 2025. Meaning no more smelly polluting vans or trucks but sustainable green electric vehicles such as cargo-bikes. How can we implement more cargo-bike deliveries successfully in the future?

No less than 10 student teams from various educational levels battled it out during the first ever Cargobikathon. The teams created solutions, using actual cases, regarding the role of the cargo-bike as part of the delivery logistics in the city. These cases were submitted by cargo-bike companies, delivery platforms and the Municipality itself. 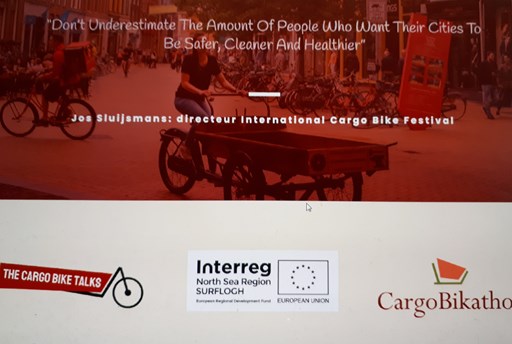 Koers Noord was the team with the winning idea. These students from the RUG developed an idea to make the cargo-bike available for everyone in the city. Their own research indicated that citizens would love to use the cargo-bike  to deliver large or heavy things on incidental occasions. Most of the retailers and hospitality sector in the inner city would like to use the cargo-bike for supplying and delivering products.

Based on a situational analyses, the students defined suitable locations for the so-called Mobihubs and Mobiparks to store cargo-bikes. The Koers Noord team members agree - “it was an educational and fun way to share our ideas for and with the city, our Groningen!”

Ilse Mensink, Programme Manager for hive.mobility and Veerle de Meyer, Surflogh partner from the City of Mechelen, were part of the jury. “I was really impressed with such amazing results – all of which contribute to creating a more sustainable city environment,” said Veerle. As a jury, we were unanimous about the winner. They delivered a strong concept that was quite thoroughly developed in such a short time. And it can be used directly!

As Koers Noord emphasised, their idea is about delivering in a future-proof city – ‘bezorgen in de stad van morgen’. It would be great to see their idea developed further and actually trialled in Groningen. We, in Mechelen, are always eager to share and exchange, and co-trial such green initiatives.” The City of Groningen is also really pleased with the results of the hackathon and consider it to be yet another success in their  awareness raising campaign.

Discussions are now underway, together with Mobian and Cargobikathon winners Koers Noord, to explore the possibilities of a pilot for this concept of shared cargo bikes for entrepreneurs in the inner city. Together they are looking at options for the realization of a platform where the shared cargo bike can be parked. This would involve replacing a car parking lot for a more sustainable, green logistics vehicle.