All about Kortemark's bike sharing system

07 September 2021 - Published by Philippe Martens
In Kortemark there has been a local bike sharing system since the 29 of march. The system contains of ten (e-) bikes and are placed at the railway station in Kortenmark.

The shared bicycles were purchased at a local bicycle shop Eric Claerhout from Kortemark. It concerns normal city bikes and e-bikes. The owner of the local bicycle shop takes care of the maintenance of the bikes. Remarkable is that the batteries of the e-bikes will be charged by vzw De Stoasje. This local initiative already organises day activities for people with a mental or multiple disabilities in the former station building. "Charging the batteries and checking the bikes can perfectly be done as an activity," says Christine Logghe, politically responsiblefor social affairs and equal opportunities in Kortemark. "The cooperation with vzw De Stoasje is thus a nice example of an inclusion project."

"Thanks to the Flemish Climate Fund and the European Interregprojects Stronger Combined and Transmobil, the municipality is responding to the model of basic accessibility of the Flemish Public Transport that the Flemish government wants to roll out from 2022," says Geert Sanders, general manager of WVI. Currently, “Hoppinpoints" are being constructed in various places in Flanders. At these recognizable locations, travellers will be able to switch easily and comfortably from one mode of transport to another. "The bicycle sharing system is an important link. For short trips, it’s often faster than walking or even using a car", says Lynn Vermote.

"The start of a Hoppinpunt at the former railway station has a great added value for Kortemark," concludes mayor Karolien Damman. "The station environment of Kortemark is situated in the centre of the municipality where various local shops are already present, and the town hall is within walking distance. By also providing a supply of shared bikes, a public bicycle pump, an parcel locker system from BPost, and eventually realising a pleasant waiting room for commuters, the former railway station of Kortemark can grow into a fully-fledged Hoppinpunt." 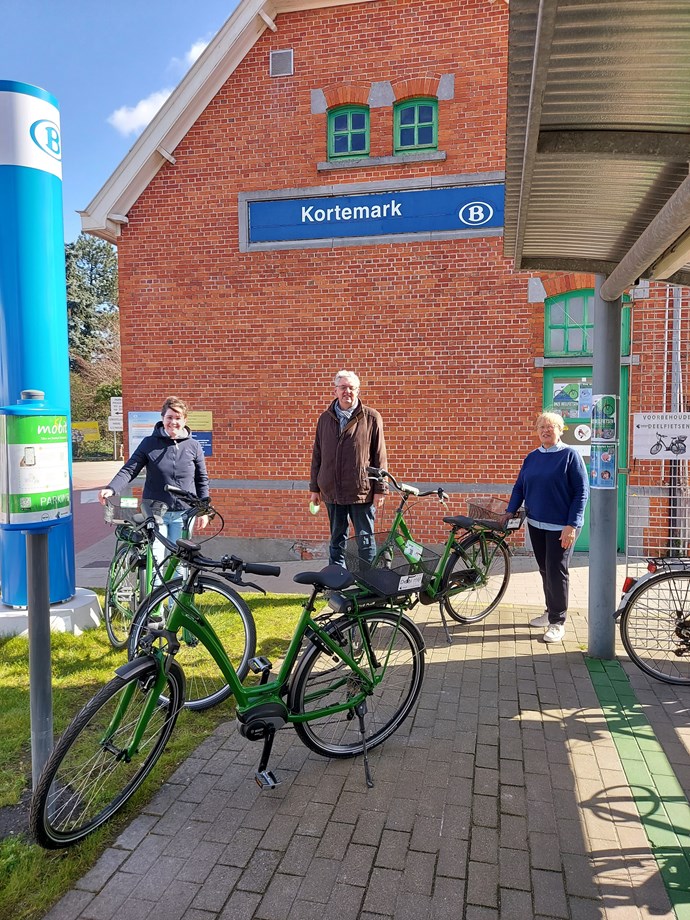 The bicycle sharing system with fixed bike rack is made possible thanks to the use of smart locks, which have a built-in GPS and can be opened with an app on the smartphone.

Using the (electric) bikes in Kortemark is cheap and easy. You only pay EUR 1 per ride, and you can use the bike for a whole day. The first time you load the app, you will pay a deposit of EUR 29 and must load a minimum of EUR 5 into your wallet or digital purse. This wallet will be used to pay for your rides. When you want to leave the system, the deposit and remaining amount will be refunded to your wallet.