Use of compost in containers and pots

17 December 2021 - Published by Hanne Lakkenborg Kristensen
Written by Esther Hessel. Within Soilcom different partners are examining the use and added value of composts in the cultivation of container plants. In the market, these container plants are produced for garden centres.

At the moment, a very important topic in horticulture is the use of peat. A lot of companies are actively searching for good alternatives for the use of peat in container cultivation. PCS and Delphy developed two trials,  in which peat is completely and partly replaced by compost.

Pot trial with Beech and Hydrangea at PCS

In 2021 a pot trial with Beech and Hydrangea was set up.  Composts from different origins and different locations in the Soilcom countries were mixed with the soil.  Normally 10-20% of compost is mixed in potting soils. In this case 4% of the substrate consited of compost.  The effect of compost on drought tolerance was measured. PCS in Belgium carried out an trial also on their test location. With Beech and Hydrangea. The objective of this trial is to test the effect of compost application on drought tolerance of the plants. In Beech it is practically easy to apply compost. Hydrangea is on the other hand a very drought sensitive plant. Already in the first days, Hydrangea is showing drought stress. Both crops were planted in pots in April. From half of June, periods of drought were simulated by turning off the irrigation system.  Both the soil characteristics as also the plant parameters were measured before, in the drought stress period and after this period. In the trial 5 composts were tested with divergent characteristics on percentage organic matter, pH.

In Hydrangea it is interesting to see is that some of the composts resulted in delayed flowering, while other composts showed plant compaction or more branching.  Soon on this website: the complete results of the trial! 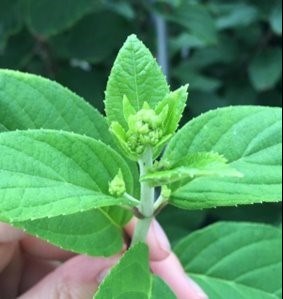 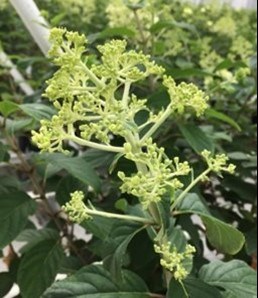 Hydrangea and Juniperus in pots at Delphy

Compost was used in a pot trial with two crops: Hydrangea paniculate and Juniperus chinensis ‘stricta’. Main objective is to find a substitute for peat. The question is, if compost has the same substrate characteristics as peat, looking at the water holding capacity, nutrients and the effect on EC. And most important, also the effect on plant growth is monitored. In the trial 20% and 40% of the pot substrate consists of compost and was compared with the regular potting substrate and treatments with fermented chopped wheat straw and dried cattle manure.

Looking at yield, the application of 10% compost resulted in an increase in the yield. Adding more compost to the pots resulted in some cases in higher yields and with other composts in a reduction of the yield. Possibly the effect of the EC on the yield of the garden beans was key.  Adding more than 30% of compost in the pots, resulted in a decrease of the yield. These effects are caused by EC, negative effects of phosphate, magnesium, natrium, zinc and NO3.  With larger additions of compost, salt stress became a problem.