On July 14th a presentation on the pathways of nitrogen compounds within composting processes was held at the Thünen Institute, which is one of the leading agricultural research institutes in Germany and is running several research projects on nitrogen emissions from agricultural systems. Due to research projects at TUHH on composting processes in closed system as well as in farm-based open field composting plants, researchers from both institutions arranged an exchange and discussion on their activities and findings.

In the course of an increasing population and the related rise of industrial and agricultural production, nitrogen pollution poses a high risk to ecosystems and in some of these systems, the amount of nitrogen has already exceeded tolerable limits. While agricultural production relies on nitrogen as a fertiliser, excesses of it can enter groundwater and the atmosphere. In this context, reactive nitrogen compounds such as NOx, NO2-, NO3 -, NH4+, NH3 and N2O are particularly problematic. Their release and availability can generally be influenced by many factors, however, in composts most of the nitrogen is bound in organic compounds.

A survey of German farmers showed that 20 % of the farmers questioned regularly use compost, with the three main reasons against using compost as a fertiliser being the risk of input of pollutants and impurities, restrictions due to fertiliser regulations and an incalculable nutrient availability. However, 2/3 of the farmers have special requirements for the N content and N types of the compost products, which suggests product diversification.

In composting processes, ammonia emissions can be controlled by many factors, the most important of which are the content of nitrogen compounds (NH4+/NH3 and Norg) water content, pH value, temperature and aeration rate. The formation of nitrate in composting mainly takes place under conditions that promote nitrification and limit denitrification, such as temperatures between 25 and 35 °C, a high initial Norg content and a high availability of oxygen (> 19 vol. %), with a simultaneous low carbon dioxide content (< 3 vol. %). The emission of these N-compounds from agricultural composting plants as well as methods for emission mitigation are the subject of current field trials, which are carried out together with two agricultural partners.

The results of the first field trials show a substantial nitrate leaching potential from both compost heaps and manure heaps under the conditions of open windrow systems. For ammonia nitrogen, a significant leaching potential from manure heaps is also observed, while ammonia emissions from compost heaps seem to play a minor role. The incorporation of carbon-rich layers such as woodchips under compost and manure heaps shows a considerable reduction potential for the translocation of nitrogen and ammonia to soil depth, while the application of bentonite in the upper soil layer did not lead to a significant decrease in soil nitrogen. However, many questions arise regarding the long-term conversion and storage of the absorbed nitrogen in the installed layers. For this purpose, laboratory experiments and subsequent field trials will be carried out. 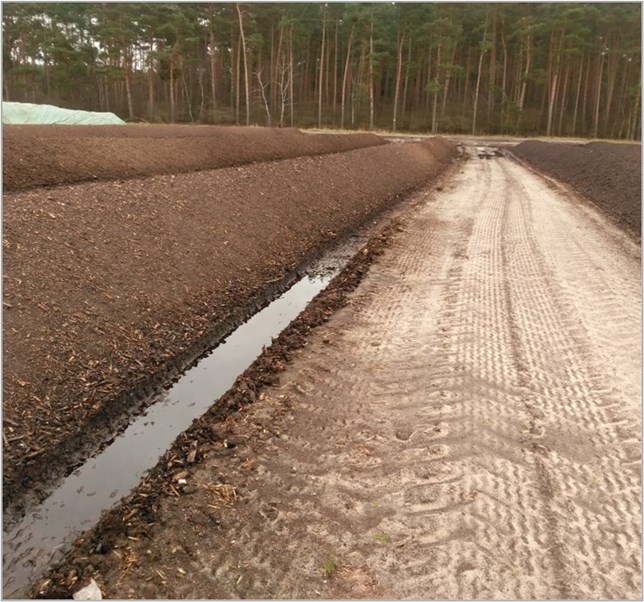 Agricultural composting plant with open windrows. The windrows are prepared from manure and municipal green waste. In the foreground water from precipitation is standing in a rut leaching nitrogen compounds from the compost substrate (Foto: Menke, TUHH, 2022).