SHARE-North project launches mobipunt websites in Belgium and the Netherlands

28 September 2018 - Published by Rebecca Karbaumer
In commemoration of the one year anniversary of the successful launch of the mobipunt concept in Flanders and the Netherlands, a new website has been launched to be the go-to resource for municipalities interested in planning and installing mobipunten (mobility hubs) in their area.

In September 2017, SHARE-North partners Taxistop and Autodelen.net launched the concept of mobipunten in Flanders. This was shortly followed by the initiative of Advier in the Netherlands. The mobipunt concept was inspired by the cities of Bremen and Bergen, who create space for shared mobility on public street space and combine car-sharing, cycling infrastructure, public transport and more at these decentralised points in the city. The mobilpunkte bring shared mobility services closer to the user in order to better meet mobility needs and are designed to address transport problems in cities and neighbourhoods such as congestion, parking pressure and forced car-ownership.

This month, Taxistop and Autodelen.net launched the mobipunten website in Belgium and Advier launched its coutnerpart in the Netherlands. The websites serve as a resource for municipalities and organisations interested in combining mobility services and expanding on the basic components of mobipunten (car-sharing, cycling and public transport elements) to include other public services such as package walls, phone charging points and bike-sharing services. Currently, more than 50 Flemish cities are planning the implementation of mobipunten in their municipalities and the SHARE-North project is also working on expanding the concept to the Netherlands and the United Kingdom.

The website is the beginning of an outreach and advising programme for municipalities seeking to create space for shared mobility in their cities. The programme will be developed and expanded upon in the coming years of the SHARE-North project.

The English version of the website will be online soon.

The Belgian mobipunt website includes an interactive map that shows mobipunte (mobility hubs) that have been implemented and those that are in planning in Flanders. 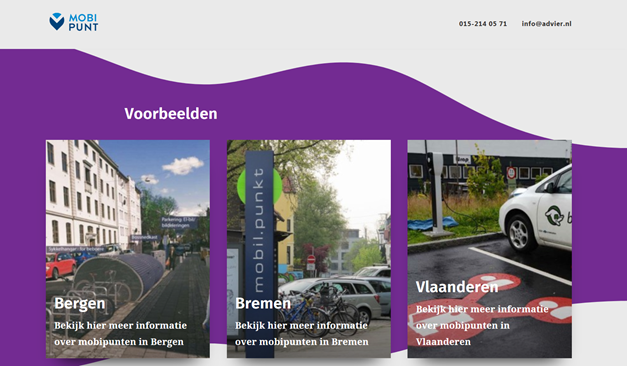 Both sites dedicate space to the origins of the concept.