17 May 2021 - Published by Rebecca Karbaumer
On May 14th, the City of Bremen celebrated a major milestone in carsharing promotion and growth: The goal of reaching 20.000 Carsharing users by 2020 and removing privately owned cars from the street.

“The most important goal is freeing up public street space”, stated Bremen's Minister for Climate Protection, the Environment, Mobility, Urban and Housing Development Dr. Maike Schaefer at the press event on May 14th. “Without carsharing we would have over 6,000 more cars on the streets of Bremen.” That’s because around a third of the 20,000 car sharing users in Bremen have either gotten rid of a car or not purchased one as a result of using carsharing. If these cars were lined up in a row, that would be over 30 km of street space! "If you wanted to achieve the same relief effect on the street by building residential parking garages, you would have to invest over 100 million Euros," says the Minister for Mobility. "Carsharing is the innovative and more efficient approach to solving the parking problem." The target of 20,000 carsharers in Bremer was set in the Carsharing Action Plan that was passed unanimously by all political parties in Bremen in 2009. At the time, it was the world's first municipal specialist plan for carsharing promotion and set the goal of quadrupling carsharing use in Bremen - from around 5,000 in 2008/2009 to 20,000 in 2020.

"Without Corona, we would have achieved the 20.000 user target figure in Bremen last year," explains the managing director of cambio Bremen, Kerstin Homrighausen. There are three station-based carsharing providers active in Bremen. In addition to cambio, the largest provider, there is Flinkster (Deutsche Bahn car sharing) and Personal Mobility Center (PMC-Nordwest eG) in the successor to the Norwegian provider Move About. However, cambio also launched a free-floating offer of 50 vehicles in combination with its station-based offer in August 2020. “Here the reliability of one part of the offer is combined with the additional flexibility of the other." The City of Bremen is also working with PMC in the European research project GreenCharge to clarify the infrastructure needs of electric car sharing for new construction projects. “There is great potential in new residential construction because fewer parking spaces are required with car sharing, which saves costs. At the same time, there is an expanded mobility offer for the people who find their home in these residential complexes”, says Dr. Bernd Günther, board member of PMC-Nordwest.

A total of around 400 car sharing cars are now available to the more than 20,000 users at over 125 stations in the city of Bremen. In 2009, there were only three mobil.punkt with 14 cars, this number has already increased to 45 mobil.punkte with around 135 vehicles - about a third of the total car sharing offer. “We are in good contact with all car sharing providers in Bremen. All mobil.punkt locations are advertised and awarded as part of an expression of interest procedure”, emphasizes Mobility Minister Schaefer. “By 2030, I would like to see at least 50,000 car sharing users in Bremen who will then have taken 20,000 cars off the streets. That will bring significant relief in our narrow streets. By 2030, the switch to mainly electric drives should also be well underway,” said Dr. Maike Schaefer. The Bremen strategy was a model for other cities in Germany and Europe.

The Belgian City of Ghent has adopted the car sharing action plan, the German cities of Achim, Erlangen, Fürth, Kempten, Leer, Nuremberg and Rostock have set up mobil.punkte, and the Norwegian city and SHARE-North partner Bergen has also adopted the design of the Bremen signage at their mobility hubs.

Minister Schaefer summed it up: "This is a stage win on the path to the mobility transition and a more sustainable future". Now it is time to work on achieving the goals for 2030. 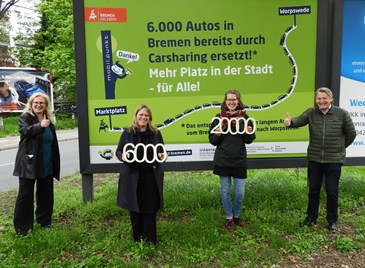 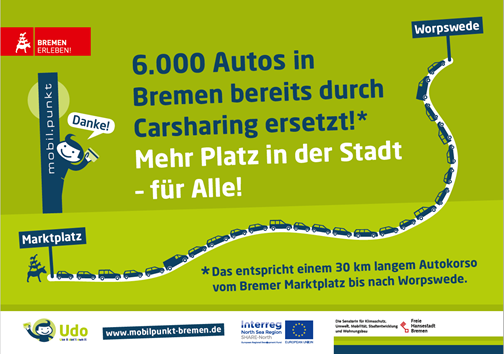