14 February 2018 - Published by Michael Glotz-Richter
February 13th was Green Deal Day! The Dutch Ministry of Infrastructure and Waterworks hosted the bi-annual meeting of the Dutch Green Deal, which was attended by approximately 30 Green Deal partners, installed the first Car-Sharing tile to mark car-sharing parking spaces in The Hague and acknowledged the importance of car-sharing in communities.

Rolling out the Red Carpet for Car-Sharing

At the Green Deal Day, coordinator Ananda Groag handed over the document “Spread out the red carpet for car-sharing” to Mr. Marc Frequin, Director General of Mobility of the Dutch Ministry of Infrastructure and Waterworks. Mr. Frequin emphasized the relevance of car-sharing for cities and regions. He also stated that he wants to see car-sharing not as a transport-only, one-issue topic. It should be integrated in a broader context; for example, in meetings with the business sector where discussions also focus on greener fleets, electric vehicles and Mobility as a Service. With 7 cities and with the energy sector, the City Deal on car-sharing was signed one week earlier. Cities, project developers, car-sharing operators and electric charging operators want to include electric car-sharing in new housing projects. Carsharing fits in many policy goals of the Dutch Ministry. Therefore, Mr. Frequin sees many opportunities to support car-sharing.

Last year, two earlier ‘red carpets’ were distributed by the Green Deal. First, the working group on municipal policies summarised their main results in a document entitled “Spread out the red carpet for car-sharing”. This document gives main recommendations for cities that want to promote car-sharing and will provide input for a decision-making manual for municipalities, which is being created in the SHARE-North project. Inspired by the name of the document, a working group on insurances delivered a “Red Carpet” document with suggestions for insurance companies. 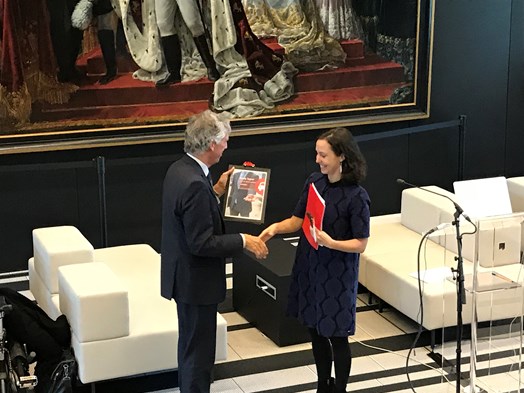 During the Green Deal on Car-Sharing, an increasing number of policy makers has been involved in car-sharing, so it is clear that the topic is on the agenda and will not disappear. Car-sharing advocates have seen a shift from a low interest issue to an issue that is relevant for all tiers of government and for politicians. Green Deal partners want to continue with the network, since it delivers fruitful possibilities for exchange of experiences and cooperation on the growth of car-sharing.

At the end of the Green Deal bi-annual meeting, all the participants went outside. Close to the building of the Ministry, Alderman of the City of The Hague Mr. Tom de Bruijn installed the first ‘Car-Sharing Tile’ to mark parking spaces for car-sharing vehicles. The ideas of such a tile have been developed in the municipal policy working group, led by Advier with support of SHARE-North. There is a demand to make car-sharing stations more visible and increase the recognition of car-sharing. For this purpose, a logo has been developed by the City of Utrecht. This logo was made publicly available. The City of The Hague now is placing a tile with the logo on all car-sharing stations. Which cities will follow?