19 March 2018 - Published by Michael Glotz-Richter
Only a few of months after SHARE-North partners Taxistop and Autodelen.net launched the concept of mobihubs in Flanders, the City of Deinze has opened the first real mobipunt.

A “mobihub” (mobipunt in Dutch) is a neighbourhood level transport hub where different types of sustainable and shared transport modes are linked to one another and made visible in the public realm. The idea is the result of transnational exchange of good practices through the SHARE-North project. In the cities that provided the inspiration, Bremen (DE) and Bergen (NO), these hubs are called “mobil.punkt”.

A mobihub can have multiple functions but some are essential: The first “mobipunt" in Deinze combines charging facilities for electric vehicles, car-sharing, a bus stop, bike-sharing, bike-parking and a public bicycle pump. The city plans to implement additional mobihubs in every village on its territory.

Deinze is a city of 31.000 inhabitants in Flanders. In December 2017, the city has launched the smart city Deinze app. The app offers Mobility-as-a-Service via Olympus Mobility. The city uses the app to offer free bike-sharing in and outside Deinze to its inhabitants. Jan Vermeulen, the mayor of Deinze, has proven that you don't need to be a metropolis or big capital to become a smart city. 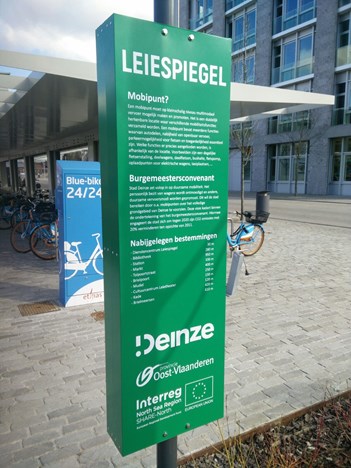