10 May 2018 - Published by Rebecca Karbaumer
On May 8th, the Norwegian City of Bergen celebrated the grand opening of its first mobil.punkt – a car-sharing station on public street space linked to public transport, cycle routes, bicycle parking, real-time transport information and pedestrian facilities – with the City’s Commissioner of Urban Development, City officials, local business community members, transport operators and users – and the SHARE-North project partners and Interreg North Sea Region Programme Secretariat. The mobilpunkt is located in the City’s Møllendal neighbourhood and is the first of its kind not only in Bergen but in Norway as a whole!

The mobilpunkt in the Møllendal neighbourhood is not the only mobility and service hub that the City is Bergen. At the moment, there are nine mobilpunkte in various stages of planning and implementation in the city. Each of the stations links the basic components mentioned above: spaces for car-sharing on public street space, bicycle parking, easy pedestrian access, and where possible, a close proximity to public transport stops. Bergen is also meeting the demand of modern, integrated planning and tailoring each mobilpunkt to meet the needs of the neighbourhood in question. In the Møllenpris neighbourhood, for instance, the mobilpunkte also include underground trash collection facilities and bicycle hangers that can be rented by residents for the purpose of parking high-priced bicycles such as pedelecs or e-bikes. Several of the stations will include spaces for vehicles of more than one car-sharing provider.The pictograms that mark the individual car-sharing spaces are directly adopted from the Dutch Green Deal for Car-Sharing.

The mobilpunkte in Bergen are a direct result of the transnational cooperation in the SHARE-North project and were directly inspired by the City of Bremen’s “mobil.punkt” concept – a strategy for making car-sharing services more visible and accessible for citizens in order to increase the uptake of this mode of transport and provide an alternative to individual car-ownership for citizens who do not need a car for their daily trips. This alternative has been proven reduce the number of privately owned cars in a city by up to 16 fewer cars per car-sharing vehicle, as a recent study in the Bremen proved (link to study coming soon). Just like in Bremen, the mobilpunkte in Bergen link car-sharing with other sustainable modes of transport that complement each other, including pedestrian and cycling facilities, public transport stops and electric charging points, both for car-sharing and private electric vehicles.

In a television interview, Bergen’s mobility management unit manager Berit Karin Rystad explained the purpose and set-up of the mobilpunkt and talked about the inspiration the City received from Bremen and the Interreg North Sea Region Project SHARE-North. Click here to see the full interview. (You can skip directly to the interview under the video tab "Mobilpunkt"). 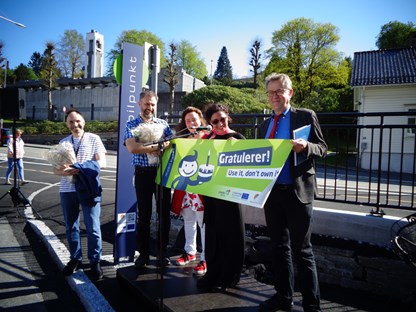 In a press release of the City of Bremen regarding the event, the Minister of the Environment, Urban Development and Transportation Dr. Joachim Lohse stated that, “Many cities in Europe share the problem of too many cars parked on limited public space. More and more cities are applying the same solutions as Bremen: promoting car-sharing as a modern transport service in order to have fewer cars on the street. The City of Bergen is directly copying the idea and concept of Bremen’s ‘mobil.punkte’. It makes me happy to see that Bremen is a source of international inspiration.” 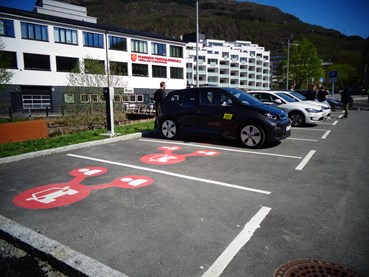