25 May 2018 - Published by Rebecca Karbaumer
The long awaited final report of an independent study on the impact of car-sharing in the City of Bremen was published on Monday, May 7th. The study surveyed users of Bremen’s two largest car-sharing providers in order to gain a better understanding of their mobility behaviour, car-ownership rate, user needs and consumer behaviour. A survey was also conducted with a control group consisting of more than 500 non-users of car-sharing. The results of the study were used to develop recommendations for the City of Bremen and other cities as well. The study was carried out by the Berlin Institute Team Red in the Summer/Autumn of 2017 under contract with the City of Bremen as part of the SHARE-North project’s activities on the assessment of the impact of shared mobility.

The survey demonstrated that the more than 14,000 car-sharing users in Bremen have contributed to a reduction of more than 5,000 privately owned cars (a 25 km long line of cars, end-to-end!) by either getting rid of their car or not purchasing a car. This contributes to a reduction in cars parked on public street space and reduced demand for parking spaces. In statistical terms, the study determined that in Bremen, each car-sharing vehicle replaces 16 privately owned cars. This is significantly higher than in other cities where Team Red has carried out similar studies and demonstrates that Bremen’s strategy of linking car-sharing with other attractive sustainable modes of transport has a significant impact on the level of car-ownership among car-sharing users.

The study also surveyed the needs of the car-sharing users. The three car-sharing providers in Bremen (cambio, Flinkster and Move About) currently have a total of 344 car-sharing vehicles at 102 stations throughout the city. The dense network of stations – currently located mostly near the city centre – result in short distances between the car-sharing stations. This was evaluated as being particularly positive by the survey participants. Hannes Schreier, the leading researcher of Team Red on the survey stated that, “The reliability of the offer and close proximity and density of stations are very important building blocks [for user satisfaction]. The survey results show that Bremen’s mobil.punkte (car-sharing stations on public street space often placed on close gaps between stations on private property) create a close proximity of stations to the residential areas of the users. This is a fundamental success factor of car-sharing in Bremen. This practice should be continued and expanded to other districts in Bremen and can also serve as a good example for other cities”.

The Director of the German Carsharing Federation (Bundesverband Carsharing) Willi Loose, also sees the survey results as a sign for other cities: „Cities and regions can use the Bremen study as an opportunity to promote and support car-sharing and to create car-sharing stations on public street space in order to generate incentives for reduced car-ownership and to reduce pressure on the transport system.”

Some key results of the study at a glance:

The study also confirmed that communication – even provider-neutral information – is beneficial for car-sharing’s success and important for addressing potential new target groups. Of the control group, 85% of non-users knew what car-sharing was and were familiar with the offer. This is much higher than in other cities survey by Team Red, confirming the success of communication campaigns carried out by the City of Bremen during the CARE-North and SHARE-North projects as well as the impact of the visibility of car-sharing services. 39% of the non-users also stated that using car-sharing would be an option for them, indicating that the market for car-sharing use is far from being saturated.

On the basis of the results of the study, Team Red developed a number of recommendations for various target groups in the City of Bremen for the expansion of car-sharing services in the City and the potential to tap into new user groups. The recommendations included the expansion of the City’s mobil.punkt network, in particular to areas further away from the city centre, the continued and strengthened integration into new housing developments and strategic cooperation with building investors and (small) business owners as well as addressing new users groups (e.g. owners of old cars, the elderly or people who are moving within the city in addition to new residents of the city).

To read the whole summary of the analysis results, you can currently find the German language version of the car-sharing study is available for download here. The translation of the study into English is currently being carried out. If you would like to receive the English version as soon as it is available just write to share-north@umwelt.bremen.de. 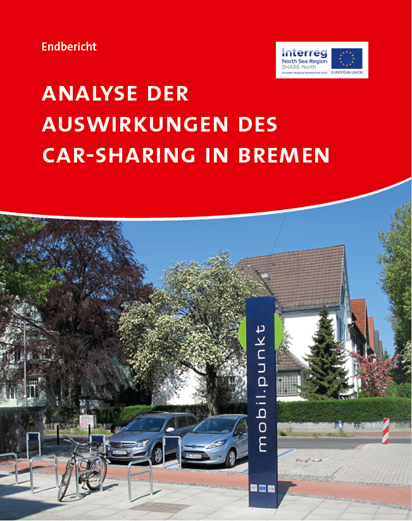