Our "Smart City in a Suitcase" going public

IoT Week is Europe’s leading IoT conference with more than 1500 participants, and this year it was complimented by a Public Expo that made it possible to reach an even broader audience. This was a perfect setting to showcase SCORE’s work with the suitcase. The purpose of the suitcase at the Public Expo was to communicate in a simple way, what IoT devices can be used for in cities – as well as how SCORE is creating transnational city collaborations in order to solve emerging problems with IoT devices.

What is inside the suitcase?

The suitcase showcases three distinct devices situated within a city setting. The first is a weather station, that gives an accurate and very local weather forecast from within the suitcase. The current weather is displayed on a small screen. The second was an audience favorite and represents flooding, which is a concrete example of a challenge SCORE is addressing. It consists of a small 3D printed leaf that can be placed on a pressure sensor, this sensor activates a red LED in a small 3D printed city hall. The idea is that when the leaf is on the pressure sensor, it is blocking the gutter and can potentially cause a gutter block which will worsen flooding. With the use of IoT this blockage can be registered and the correct authorities will be informed. The third device consisted of a motion sensor which activated speakers inside the suitcase, that played ambient city sounds. The idea behind this is, that it takes movement and people for cities to exist.

The interaction with the public

Many of the visitors at the Public Expo were children, and the interaction with the suitcase sparked many thoughtful discussions about challenges in their own cities and how IoT solutions could help solving these. Many of the children had experienced flooding in their cities and homes and therefor they had many ideas for how this issue could be solved with IoT devices. This edition of the suitcase was shaped by the context it would take part in and the choices made about what devices to use and interactions to create was influenced by the fact that there would be many school children present at the Public Expo. In that regard the suitcase was a success as it was popular with the children. The suitcase also caught attention from the conference participants that were generally very interested in learning more about the collaboration in SCORE and the sharing of data. All in all, SCORE’s "smart city in a suitcase" turned out to be a good communication tool to showcase SCORE’s work and to create dialogue with children as well as with IoT experts. 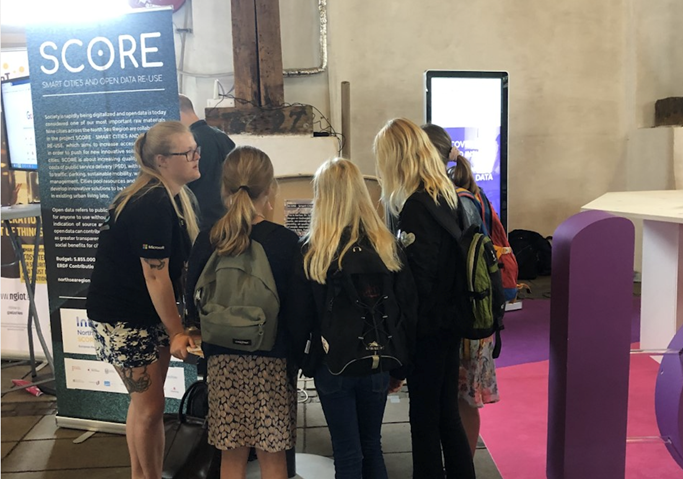 The more technical inside

Technically, everything was set up using two arduinos and some sensors. For the leaf and LED setup, the pressure sensor was calibrated to react to values over a certain threshold that would change the setting of the LEDs pin, turning it on. At first there were issues with this, as the leaf was too light to trigger a reaction on the sensor. This was resolved by weighing the leaf down with a coin. Even though the suitcase is only a representation of the work being done in SCORE, the technical issues that arose along the way serve as an example of how technical work often ends up taking other directions than originally planned and that no amount of planning can prepare you for what will happen once devices are hooked up to each other and turned on. The motion sensor and sound element was created using a motion sensor that gave an analogue output, that triggered a VS1053 Codec + MicroSD Breakout hooked up to a homemade amplifier and some old computer speakers. This created a fun interaction as well since the sound would stop if the audience around stood completely still and start immediately once someone moved.

The suitcase is now ready to be developed further and continue its travel.