13 August 2020 - Published by SCORE comms
Since the 2008 economic crash there has been sustained pressure on local authority budgets and significant savings have been delivered. In the case of Bradford Council this has meant fewer operatives, leading to lost knowledge and less time to empty more than 3,000 litter bins. As with other local authorities, Bradford realised that some form of data gathering process was required to try and set up a more managed approach to litter bins – nationally this trend has been labelled as ‘binfrastructure’.

For decades’ local authorities in the UK have been installing litter bins across their districts with very few details (if any) recorded and stored.  Often installations are made with no strategic planning following requests from Councillors and the public.  All the intelligence on the location and requirements for the emptying of litter bins is in the heads of the operatives on the streets – handed down from their predecessors. 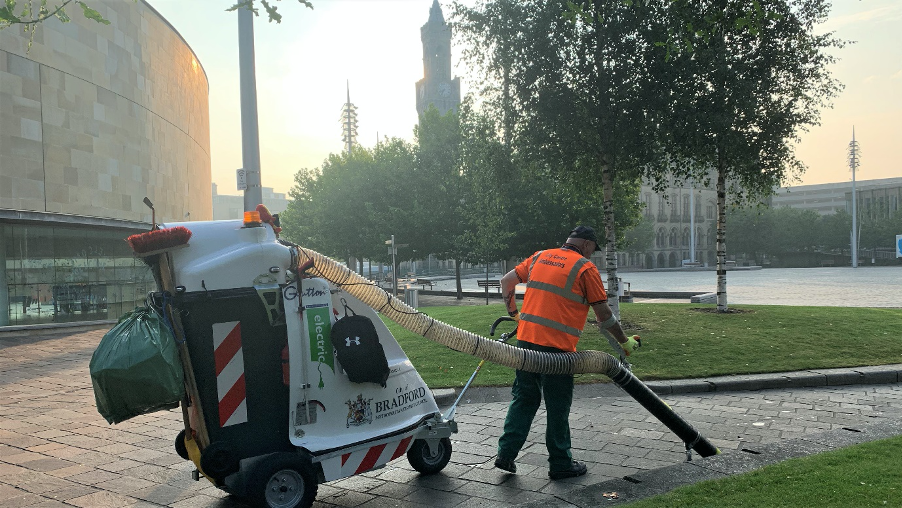 As this project had no dedicated funding or resources it had to be driven organically by self-learning and staff utilising readily available software and hardware already present within the council.

Bradford Council are partners in the SCORE project which has looked at how QR codes might be used to improve service efficiencies throughthe development of:

“a reusable, open source, QR code based, ‘low tech’ geo-locating object toolkit as a solution that enables smart cities to quickly set up IOT proof of concepts for a broad spectrum of use cases/challenges that are about: 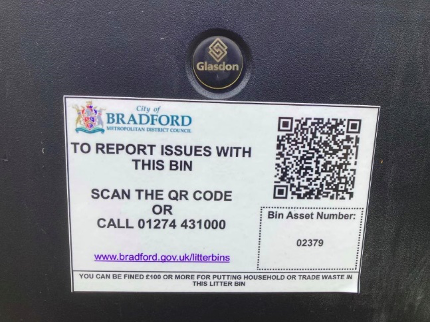 The idea of using QR codes with unique asset numbers embedded within them to generate a unique URL was tested using free online QR code generators and proved to be a deliverable way for making the QR stickers more accessible to an increasingly tech-driven society.

To create stickers for each bin, 4000 unique QR codes were created and merged into a document with a sticker template.

Information was collected using an app which has been developed on MS Power Apps to harvest data from the operative affixing the stickers, as well as pointing to a public facing web site for citizens to see when they scan the QR code.

Once the stickers, app and public web site were ready the operatives started working their way through the district. Upon discovering a litter bin they:

The app automatically captures the asset number embedded in the QR code, the user, the geospatial data and the date/time. Each completed e-form is emailed to a dedicated account. This account acts as the source file for middleware that pulls all the data in to a table along with the geospatial information.

Code within the middleware is used to allocate the nearest street name to each asset number, with a very high degree of success and minimises the need for assigning streets manually. The resulting spatial data is then visible within a GIS such as ArcMap.

When the QR code is scanned by a member of public the asset number is contained within the URL meaning that any report received is specific to a litter bin asset on the database. This allows future work where specific bins could launch different pages depending on need, for example a message along the lines of  “Thank you for reporting this defect – we are already aware and the bin is scheduled to be repaired shortly”

The web page at the moment is just a basic place-holder and will be replaced by a more intelligent page in the future. Once the final bins have been captured and plotted, the intention is for the page to display the street location and to assign submitted reports to different email addresses based on a database look-up of the asset number:

The URL process has been put together in such a way as to allow the recognition of a device used by an employee, meaning that it’s possible to have a separate page for employees scanning the bin with different options or information if this functionality is required in the future.

Whilst the project is not quite completed (an estimated 10% of bins remaining), the data gathered so far has been accurate and useful and will act as the foundation for any decision-making  that the local authority may make in future with regards its litter bin provision. The project has also been a good learning curve for staff within different services, allowing a greater understanding of the options and capacity that exist in the various products that are easily found within most large local authorities, avoiding the need to buy more expensive products or have to externally source the services.