The Cleantech Collaborations Day: It’s All About People. And Partnerships. And Peels.

Suppose you have a brilliant idea to make the world a greener place. And suppose this idea actually works. Better still: your plans are viable enough to make big corporations interested in implementing them. Congratulations! But where do you start from there? How would those big buyers even know you exist?

That’s where Interreg SCALE-UP comes in. For the past six years, this European program for the North Sea Region has been busy connecting innovative cleantech scale-ups (that is, companies that have successfully outgrown their start-up phase and are ready for the next big step) with large enterprises. It’s a ‘Tinder for business’, so to speak, where scale-ups with proven technology can find big, international partners.

If you’re curious to know if all this matchmaking has led to enduring love - well, lots of juicy stories were told on the Cleantech Collaborations Day, which took place on November 18 in Rotterdam, The Netherlands. They involved shorter showers (how romantic), circular plastic, and pressed oranges (like we said: juicy).

The Cleantech Collaborations Day, part of the final act of Interreg SCALE-UP, was hosted by BlueCity, a Rotterdam hub for circular economy, magnificently located at a former tropical swimming pool with views over the city and the river Nieuwe Maas. Unfortunately, in the week leading up to the event, it became clear that due to new Covid-19 restrictions, everything had to take place online. So instead of having the place buzzing with people, BlueCity provided a studio for digital talks.

Still, it was a lively meeting of minds, all set on making cleaner technology. The first part of the day consisted of looking back. Moderator Peter Melis talked with Wouter van Rooijen, who is involved in SCALE-UP as a matchmaker from the City of Rotterdam, a lead partner of the program. ‘It’s a win-win situation,’ Van Rooijen said about SCALE-UP. ‘We want to stimulate cross-border collaboration and help innovative companies to really scale up their cleantech technology to a multinational level. At the same time, it gives corporations access to cutting-edge technologies that have already been developed and have been proven to work.’

One example of such technology came from Thomas Munch-Laursen, who attended the meeting as co-founder and CEO of Aguardio. This Danish scale-up is ‘on a mission to reduce water use, especially in the bathroom’, Munch-Laursen explained. They developed a plug and play device that you can click on the wall in the shower, and it will tell you how long you are there.

Thanks to the Interreg SCALE-UP program, Aguardio met with the English company Anglian Water. It was a ‘perfect Tinder match’: just one meet-the-buyer session proved enough to successfully work together. Since then, 5.000 units of the Aguardio device have been installed in the UK, reducing shower time by users with roughly 3 minutes. That’s a lot of water saved.

Talking about his experience, Munch-Laursen said: ‘It was definitely positive, however, you have to be patient. Sometimes we wish corporations would work faster.’ Pascal Spiekerman from Pryme, another attendant, agreed. Pryme is a company that makes plastic circular, on a very big scale: they collect plastic to recycle from waste handlers in several countries. A new installation plant will be built in the port of Rotterdam. ‘It’s all about the network,’ Spiekerman said about the success.

The conclusion about the SCALE-UP program? It works. The right introduction to the right people at the right time is crucial to accelerate cleantech plans and ambitions. Still, patience is necessary to build collaborations and follow up on them, especially with big corporations, where decision-making simply takes longer because there are a lot of stakeholders. ‘It’s very possible that you’re working at different speeds’, said Van Rooijen. That’s not to say the love isn’t there.

To make the Tinder metaphor even more accurate, Van Rooijen disclosed that there is now an actual app that connects cleantech scale-ups and buyers. And yes, ‘you can swipe left and right.’

Another story was shared by Lindy Hensen, co-founder and current member of the supervisory board of Dutch company PeelPioneers. PeelPioneers uses leftover citrus peels from juice machines used in supermarkets and restaurants to make, for instance, functional fibers and aromatic oil. In other words, they extract value from waste – quite literally.

Hensen shared the steps that the company has taken on its path from start-up to scale-up. Essential to the growth of the business was its partnership with Renewi, a big waste company that’s also a leader in recycling. ‘Renewi put trust in us at an early stage,’ said Hensen. ‘They were willing to bring us leftover orange peels from supermarkets each day, so that we could try out our technology and build our first plant.’

Since then, PeelPioneers has come a long way. A bigger plant is currently almost finished and will be operational in a few weeks. ‘It’s still a journey’, said Hensen. ‘We’re building towards five plants and are looking at internationalization right now.’ Asked about the advice she could give other innovators, she said: ‘Really work out how you can help corporations with their problem. Also, work on personal relationships. Networking is all-important.’

As it happened, networking formed the next part of the Cleantech Collaborations Day. Several matchmaking sessions took place between scale-ups and potential buyers such as Port of Rotterdam and Anglian Water.

While they were meeting in private sessions, we took the chance to talk some more with Peter Melis, who as a host and moderator is specialized in sustainability. Looking back at the six years that the Interreg SCALE-UP program has been in place, did he believe the world has indeed become somewhat greener?

‘When it comes to change, we tend to think things are moving too slowly,’ said Melis. ‘It’s not a coincidence that the word patience has been used a lot today. And I have to admit I’m often not that optimistic myself. But think about all that’s changed in the past six years. Back then, for instance, we only had a few plant-based meat alternatives. Now, supermarkets offer ample choice. And there are so many people who are now truly invested in sustainability.’

‘I think this program shows that in the end, it’s all about people’, added Melis. ‘Whether it’s in a big company or a small one, once someone is intrinsically motivated to change things for the better, that’s the incentive other people need. After that, it can spread like wildfire. Of course, we need patience, we need money, but first of all we need people who can see the bigger picture and who believe in it.’

Join us at the SCALE-UP closing event

Join us at the closing event of the SCALE-UP Interreg North Sea Region project on 18 and 19 November, where we connect scale-ups, corporates and governments for an

In April, Cleantech Flanders organised, in light of the Scale Up Interreg North Sea Region project, several online Meet the Buyer sessions in co-operation with Aurubis. Aurubis Belgium is specialized … 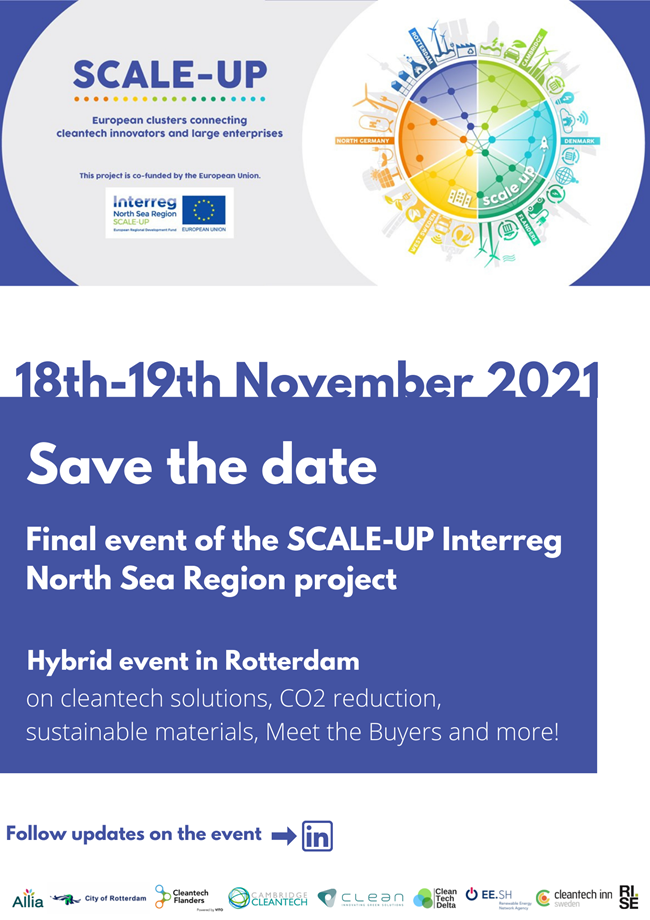 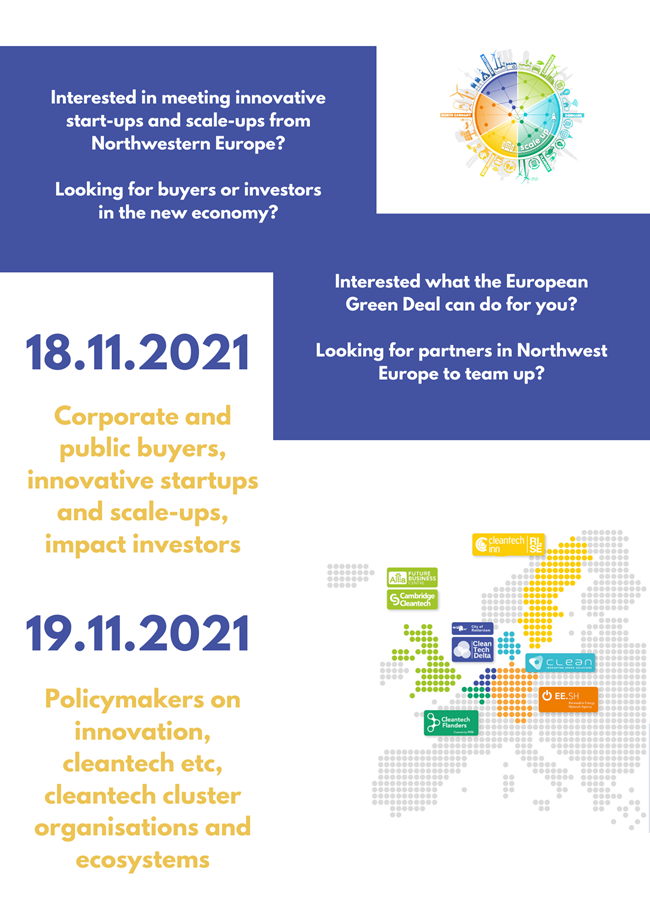 A fruitful collaboration may be the next step after Søren Jessen Kjær, Co-Founder of , has held direct 1:1 meetings with , a large Japanese company via one of the environmental cl…