24 October 2019 - Published by Dorte Storper
On 13 September the final excursion of the Saline Futures Conference took place. This time the 25 participants, scientists and farmers, were welcomed at the premises of Ökowerk Emden, another partner of the SalFar project.

Ökowerk Emden is an environmental education centre located at the edge of the city of Emden, just across the Dutch-German border. Detlef Stang, managing director, welcomed the visitors and the tour through the test fields started, showing an array of interesting experiments related to salinization and plant growth.

Two film crews were also present that day: the Dutch Omrop Fryslân, which created a nice news item (in Dutch and Frisian) about the excursion that can be watched here.

In addition, there was the “Norddeutscher Rundfunk” working on a documentary about Ökowerk Emden in a broader context to be broadcasted in 2020. 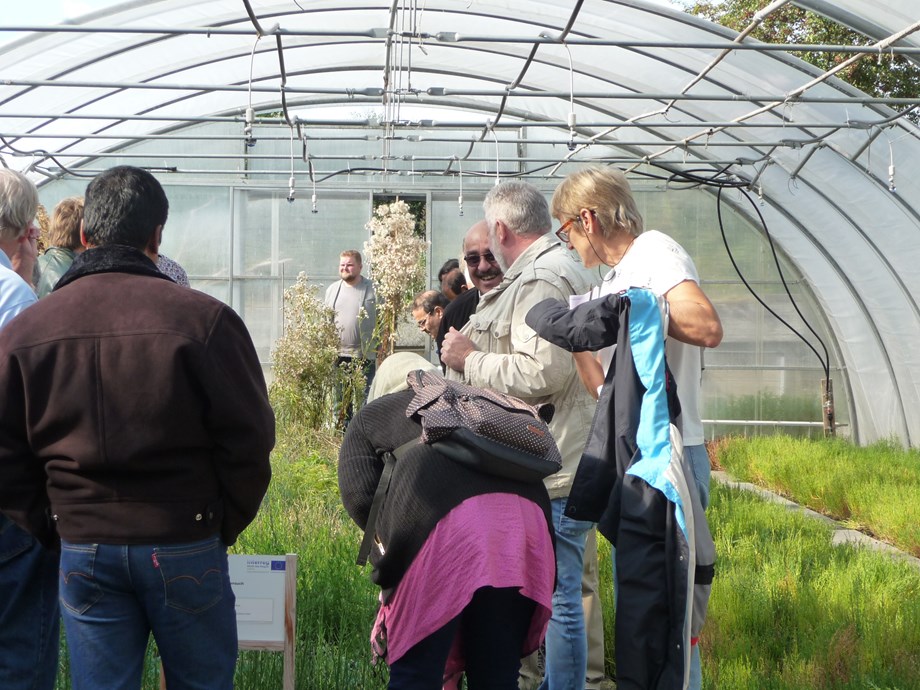 The first part of the program consisted of a greenhouse tour where a large variety of halophytes and other salt tolerant species were cultivated and experimented with. Plants naturally growing in the Wadden Sea like Salicornia europaea, Cochleria officinalis and the surprising Aplonia cordifolia could be tasted to find out about their culinary value. The greenhouse is an important demonstration site for guided tours of scientists and other interested visitors, but also has an educational purpose for schoolkids and the general public. Detlef Stang showed the group around and explained the experiments in detail, as well as the new insights and production techniques Ökowerk has developed. Experiments with seaweed as fertilizer for instance showed very promising results in terms of the increase of yield of potatoes in saline soils.

After the first part of the guided tour, the visitors were invited to a delicious lunch featuring a variety of newly developed saline recipes, created by Ökowerk Emden’s culinary partner Agilio.
. 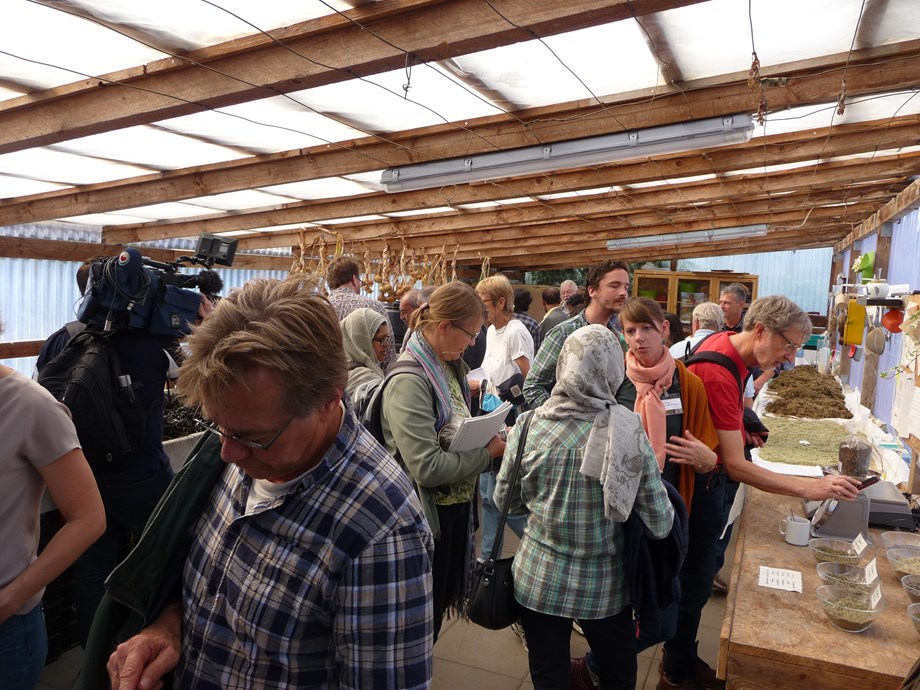 After lunch, the group was treated to a grand tour of the 7 hectare premises of Ökowerk. Several other projects of Ökowerk were also highlighted, such as “Silence of the Bees”, which aims to improve the living conditions for all kinds of bees and thereby wants to contribute to stopping the decline of bee populations all over the world. Another memorable project was the “Pomarium frisiae”, an orchard featuring some 600 different varieties of apples. The pomarium is a repository for ancient, regional apple types, which in many cases would have long died out had it not been for the endeavors of Ökowerk. The group of scientists and farmers admired the work being done in this very special orchard and of course, as it was just the right season late September, they tasted the different types of apples with great pleasure. 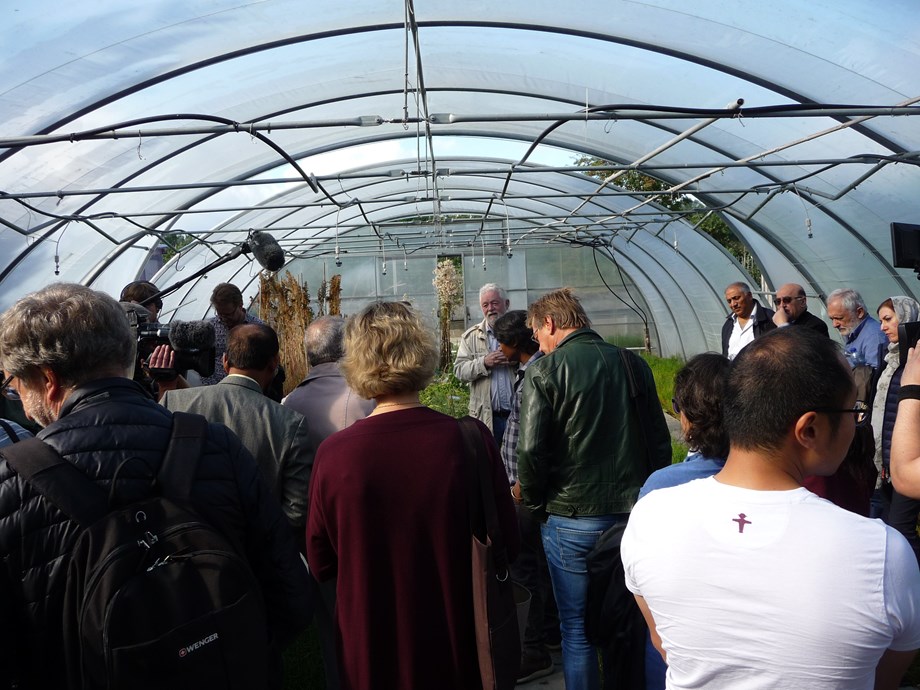 A second greenhouse used for propagation of halophytes and for pot trials with the seaweed based herbal fertilizer, was also part of the afternoon program.

The last item on the agenda was a visit to the location where Ökowerk was conducting open field trials with halophytes such as Salicornia europaea, Cochlearia officinalis, Aplonia cordifolia and Mesembryanthemum crystallinum as well as regular crops such as potatoes. For these field trials the saline sediment from the river Ems, less than 100 meters away, was used, which showed good results already and could serve as a good example for farmers who wish to learn more about saline farming methods. 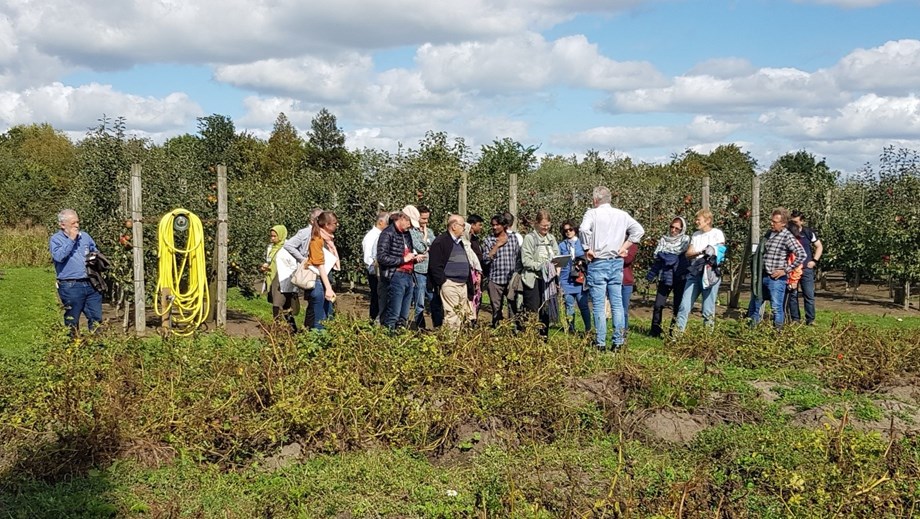