15 September 2020 - Published by Dorte Storper
For a whole year, a film team has followed Ökowerk Emden and their activities related to SalFar, which has now resulted in a 30-minute long film that has been aired on German television.

Over one year the film team visited Ökowerk Emden 9 times, each time for a whole day. In the end, they had approximately 50 hours of footage.

“The objective was to show Ökowerk Emden’s activities related to the SalFar project for an entire year. The production of the film therefore started in June 2019 and was finalised in July 2020. The film team visited the premises 9 time and each visit consisted of 11 hours of concentrated work. The film focuses, among other things, on aspects of the field trials we are conducting and the production of a natural fertilizer made from seaweed”, Detlef Stang, Director of Ökowerk Emden explains.

The film has been aired twice in full length on the German TV channel N 3 and once on 3SAT in a summarised version. The film was aired for the first time on 28 July and according to the TV station N 3, the official number of viewers was 234.000.

Has the film generated an increased interest for saline farming?

After the film has been aired Ökowerk Emden and SalFar has experienced a great deal of attention.

“We have experienced a lot of attention from both private and public actors as well as the media. One of the things that stand out is the fact that we received a personal letter from the Minister of Rural Development and European affairs, Dr. Birgit Honé, who wrote to congratulate us on our work”, Detlef Stang says.

Birgit Honé has previously visited Ökowerk Emden in 2018 where the purpose of her visit was especially to hear about the SalFar project.

The film is titled “Die Tüftler vom Deich” which can be translated to “The tinkerers from the dike”.

Click on the photo below to see the film. 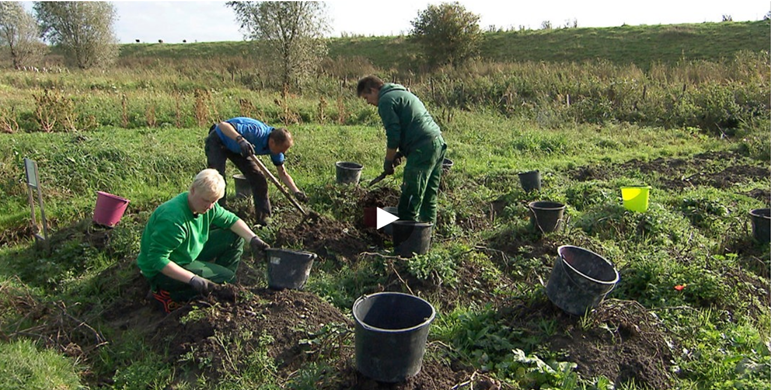