REKO-rings - a new way of reaching the consumer

REKO-rings - a new way of reaching the consumer
The REKO-rings is a way to buy locally produced food, without unnecessary intermediaries. Consumers and producers in one place join their forces and starts a REKO-ring, a digital trading channel using Facebook to sell and buy local food. Simple and ingenious!

REKO-rings have during last four years become a popular way in Scandinavia for small-scale food producers and consumer to meet, make business and create relations. At the same time building a network and logistical system for locally produced food. Since all trade is made in advance there is no wastage for the producer and the local meeting point is only to pick up already sold food from several local producers at the same time. The local REKO-rings have their own administration and guidelines adapted to local supply and demand. 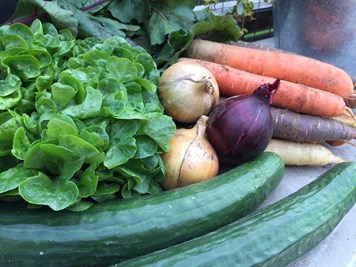 Introduction
REKO was introduced in Finland by Thomas Snellman during 2013, and has in a short time become a considerable organisation in Scandinavia involving more than 1,5 million people within a couple of hundred REKO-rings.
Sweden first REKO-ring was started in a small town in West Sweden in 2016. It has been a fantastic development! In September 2020 there is more than 200 REKO-rings with about 700 000 members in Sweden.
Since the REKO-rings is run on a non-profit basis by different people in different municipalities, there is no reliable information on how much is traded via the REKO-rings. But we know that there are significant sales numbers, and that many micro-enterprises have REKO as their main, and sometimes only, source of income.

How does a REKO-ring work?
The marketing and sales channel for a REKO-ring is a closed Facebook group. The producer and consumer who want to take part apply for membership in the group he or she likes. Administrators, often a small group of consumers, approve the application according to local guidelines and thereafter trade can begin. Normally delivery occurs every or every other week, depending on the size of the group. Delivery times are more often shorter than an hour. The producer writes a post about their production, products and availability in the closed group on Facebook and the consumers make orders by comments directly under the post. The producers also write how they like their payment. All trades are transparent for everyone in the closed group.
When the REKO-ring has started it carries on of its own capacity. Often the only task of the administrators is to approve new members, check that guidelines are followed and put reminders for coming pick-up dates and time. Participation is completely free.
The main criteria for the REKO concept are that it is trading channel for local food with production in nearby area. It can both be primary production and locally processed food with at least Swedish origin of raw material. Producers take responsibility to be transparent regards to food approval and TAX registered from Government.

The benefits for the producers and consumers
For the producer, the REKO-rings means free marketing and a time efficient sales channel. Here they meet consumers with a specific interest for their products. The REKO-ring is furthermore a suitable arena to test new products.
For the consumer it makes the small and locally produced products more accessible and creates an increased interest of local food.

An important sales channel during Covid-19
When Corona epidemic hit Sweden many small-scale food producers got into big trouble due of the lack of guests in restaurants. Many small producers in Sweden sell their products to restaurants in the area, attend to local markets and local food events and suddenly many small producers found it difficult keeping their ordinary local business.
As a part of the REFRAME project, the non-profit organization Locally Produced in West helped producers to reach out to new customers via the REKO-rings instead. It was an easy and quick way to save many companies from bankruptcy. The companies received advice regarding food rules for REKO-rings, sales training, price calculations etc.
REKO-rings has been an easy way for the consumers to reach the producers and their products during the Corona pandemic. It is a “quick-stop-shop” and it takes place outside in the open air. The consumers demand for local food has also increased during 2021, as many consumers want to support small local companies.