Local food networks were established in the 2000’s in most parts of Denmark. The initiatives were taken by small and medium-sized food producers. Support for their operation was, in many cases, achieved through the EU LEADER PLUS programme. The food networks were instrumental in developing local identity and local infrastructures for food production, marketing and profiling of the location. Together with the innovative producers, they are the primary cause of the strength in Denmark of ‘Locally produced’ as a retail marketing parameter. The ‘Taste of Denmark’ (Smagen af Danmark) seeks within the context of REFRAME to stimulate bottom-up food networks in Denmark.

Co-operation in Danish is translated to ‘Samvirke’, and it means ‘individuals coming together in an organized way to operate a commonly owned solution to a common challenge’. The principles of the co-operative movement were established in Britain in the early parts of the 19th century as a means for the poor to create better living conditions. Among the first co-operative examples were food production and retail shops. This movement came to Denmark and in 1866, it led to a co-operatively owned retail shop – today the largest Danish retail company, Coop, still co-operatively owned by consumers. In 1882 the first co-operative dairy plant was established by milk producing peasants. The company today is known as ‘Arla’ – still co-operatively owned by milk producing farmers. By the end of the 19th century the co-operative movement had become a driving force of development in all parts of Denmark and in a variety of activities. The co-operative movement had a profound impact on the development of Denmark as a food producing nation. It enabled the development of processing facilities, marketing and distribution channels. It was also – and still is instrumental in setting standards in food safety as well as in eradication and control of infectious diseases in animal husbandry.

Agriculture and farming in Denmark became the most structurally developed industry in Europe. Today, primary products are generally picked up by trucks at the barn door to be processed somewhere else in the world. This means that the development of an innovative food production company based on the ‘good idea’ often requires, in addition, the establishment of small scale processing facilities and other infrastructures from farm to fork.  In compliance with traditions, the attempts to solve these challenges were often co-operative, and a significant increase in the number of small food entrepreneurs was among the first results. The food networks provided a forum, where like-minded spirits met and stimulated each other to believe that the ideas and visions could become real. In addition, the food networks gave meaning to the concept of authenticity in food production.

An interview-based study of the challenges and opportunities of small and innovative food producers in Denmark was performed and published1. Among other results, these interviews identified the objectives of the food networks, requested by producers, to be identity-based marketing and distribution logistics. 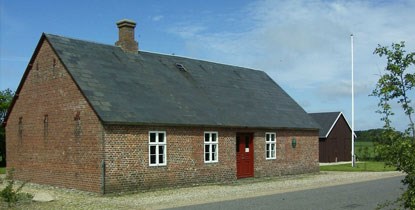 Hjedding dairy plant was the fist one, established co-operatively by peasants. It is today a museum and a symbol of the impact of the cooperative movement in Denmark.

Next steps
The Danish contribution to the REFRAME project is to support the bottom-up approach; the Danish partner being ‘Taste of Denmark’ (www.smagdanmark.com), an umbrella organization for food networks. During the REFRAME project, resources are allocated to local food networks to make local/municipal/regional business cases for the development of local infrastructures for food production, processing and marketing. Island communities are used as models in these studies because islands are distinct geographical entities and their communities often have a strong profiling of identity. In addition, they represent self-contained examples where the effects of interventions can be easily monitored.

‘Taste of Denmark’ developed a unique concept of a combined digital marketing platform and distribution logistics, FOODMATRIX 2. A version of it is being developed and is now operative in Denmark (www.smagdanmark.com). Being owned co-operatively, the food networks would serve the role as marketing units presenting the local identity, updating products and presenting contemporary culinary experiences to residents as well as to visitors. FOODMATRIX at the same time represents a single portal for consumers to specialty products from all locations of Denmark. FOODMATRIX is a gateway to the national and – eventually – the global market for the smallest and innovative food producers. If the role as operator on developing the marketing platform is grabbed by local food networks, it also would define a mission and basis of existence of these food networks.