The interface of sea and land – the coastal regions - represents a diversity in the biosphere as well as in conditions of food production, not often seen anywhere else. This fact may be forgotten in conventional, large-scale farming, since these locations are less fit for the main seed variants used and farming practices in general. Hence, coastal regions are often considered marginal in relation to food production and vulnerable in terms of rural development.  Yet, coastal regions including the smaller islands always were a main focus of Taste of Denmark with the intention to develop the perception that these areas are the living laboratories of adaptive, more sustainable and/or climate change resilient food production. And it is a fact that there are more small, innovative food producers in coastal areas than anywhere else in Denmark, often favored by synergy with tourism due to short supply chains to a market and the development of awareness and, hence, ambassadors of our products and activities[i] . 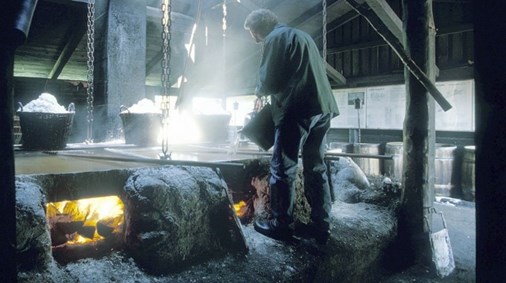 Flooding by the sea is a challenge to food production all over the world and an opportunity to others. The flooding during winter at the island of Laesoe in combination with the evaporation during summer has led to the production during almost a millennium of the renowned salt flakes of Lasaoe.

Background
Climate changes and sea level rise causing an increased salinity in soil is the most important single cause of soil degeneration in the world. The North Sea Region in this respect is generally favoured by a precipitation of rain exceeding evapotranspiration from soil but seasons of severe drought in recent years in combination with capillary seepage of saline water from deeper layers in the marsh and polder areas to the root zone has been observed to cause crop damage. Likewise, flooding by the sea is observed with increasing frequency in coastal areas and islands of Denmark affecting crop performance for several years on such locations. Before the end of this century, we will see flooding of larger areas of arable land in the North Sea Region and it is time to prepare our food production for this situation. 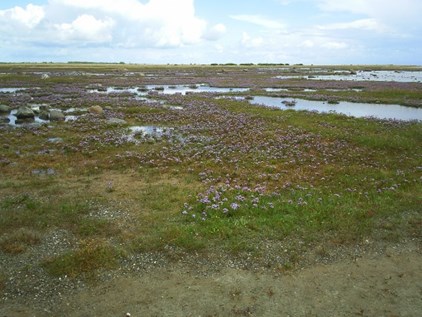 Denmark is rich in marsh land and meadows

Denmark is a small nation of many islands, with a coastline of 7.300 km, rich on marshland and meadows, and an altitude above sea level under 200 m. Denmark is also located between the brackish Baltic Sea and the saline North Sea and farming and food production is essential for the Danish economyi. This, all together, means that Denmark has optimal conditions for experimenting with salt tolerant plant production under a variety of conditions.

Establishment of test site with salt tolerant plants
During the past 5 years, soil samples have been collected in Denmark and analysed for salinity at a laboratory established by Taste of Denmark[ii]. Soil salinity was found not to be a major problem in Denmark but a variety of locations were also identified, which are transiently affected by salt from the sea[iii],[iv]. In addition, Taste of Denmark has established the first test site in Denmark where irrigation with mixtures in different proportions of fresh water and sea water allows the establishment of a gradient of salt in the root zone of the soilii. The first tests of plants and plant variants, never grown before in Denmark, were performed in 2019, co-funded by the SalFar project. These tests were continued in 2020 as private enterprises. 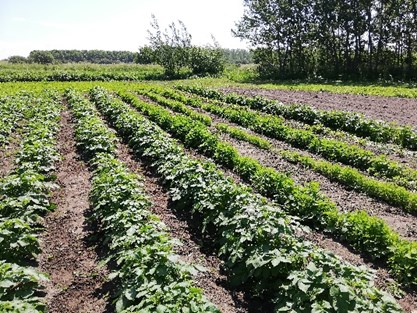 Salt tolerance in plant variants as well as growth in saline soil results in sensory and dietary qualities in the plants diverging significantly from products already on the market. In 2020, the production of salt tolerant vegetables was upscaled a bit and products were tested by micro-scale sale on the market[v]. Market appreciation of the unique qualities of the products as well as appreciation of the narrative of this production was very positive.

Marketing of salt tolerant vegetables
These investigations and initiatives of production have been communicated at the Saline Futures Conference in the scientific literatureiii, iv, in newsletters of Taste of Denmarkii, v, etc. The interest expressed by small-scale producers living in relevant locations has led to agreements on production of vegetables, identified as suitable, on five islands in the season of 2021. According to these agreements, the products will be sold locally on each island based on one common brand and the same marketing narrative. Additional products will be sold under the same marketing brand and narrative in specialty food shops that have been identified in the major cities of Denmark. Marketing in 2021 will be accompanied by press releases and publications in relevant national journals.

It has often been mentioned by the Danish partnership in REFRAME, that the driving forces in development of local food production in Denmark are the small and innovative food producersi. It was also suggested that these small enterprises, developed by individuals with an idea that food production can be done in new ways, new qualities can be developed in the products and/or new principles of sale and distribution can provide the basis of sustainable business, represent a major potential in the development of more sustainable food production in the future and compliance with the Paris Agreement on climate changes[vi]. The development of saline farming in Denmark is an example of this. The locations affected by salt are still small in Denmark and, therefore, not very attractive for conventional, large-scale farmers. On the other hand, identification of relevant crops, initiation of production, marketing and upscaling for the market requires co-operation between the producers. Our production initially can not be price-competitive. Yet, the unique qualities of these products and the narrative of our visions will justify premium prices in the market and provide basis of income to these small producers, as well as assist significantly in profiling these living labs of the Danish food landscape.