The short food chain bottom-up
Our worldwide food system is very efficient and cost effective. Big organizations work together on our food supply. They made our food cheaper than ever before. So what about the short food chain? Despite that most people find it a sympathetic idea to make our food system more local and sustainable, critics say local and sustainable food will only be feasible for the rich. The group of people having difficulties to purchase their daily meals are not able to afford it. But what about the way producers earn money, how they treat their animals, what about biodiversity and our climate? Growing food is more than money, that is why Reframe has teamed up with Toentje.

A social initiative
Started as an initiative which grows vegetables and herbs for the food bank (a food bank is a non-profit, charitable organization that distributes food to those who have difficulty purchasing enough food to avoid hunger), Toentje has deserved her slogan: within Toentje the City is growing. Groningen is a city where one third of the population is well educated and employed and 20% of the inhabitants are struggling to make a decent living. When initiator Jos Meijers discovered that the food bank had no fresh vegetables and herbs in their product range, he planned to grow them for their clients.

Toentje started in 2014, on a plot near the food bank, in a deprived area. There is an old Liquor factory where they have their office and where they have built a social restaurant. Over 40 volunteers from diverse backgrounds work in the garden and the restaurant: temporarily or long term unemployed people with a migrant background or people with health problems. The volunteer work gives them structure and a purpose in their daily lives and stimulates them to be active and be part of the community.
This initiative started with funding from the municipality of Groningen. From the very first start they were looking for means to be self-sufficient. Without Toentje, over 40 people would not have their volunteer work and the clients of the food bank would miss out on  healthy vegetables. But how to calculate that value?

In 2016 REFRAME was asked to help
Back then in 2016, In three different workshops the possibilities for Toentje were discussed in three different workshops. The R-link project had an important contribution: they take a look into the effect of bottom-up initiatives. They invited a broad range of stakeholders, including the neighbouring companies and residents. In the end they had a variety of possibilities to expand their activities, more connected with their neighbouring district and all related to their core business: food. 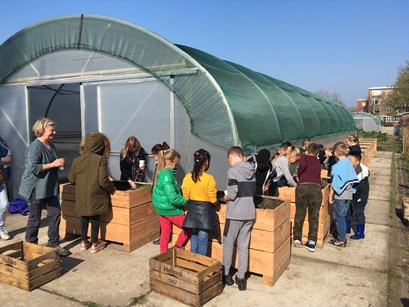 The restaurant is up and running after a bumpy start and becoming popular with different groups. You can have a three course menu for a small amount of money and there is a special arrangement for people who normally can’t afford a meal out. The kitchen is run by people in a disadvantaged position in the labour market. 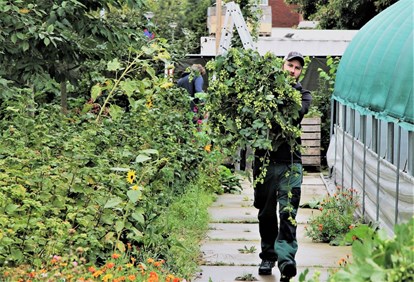 City beekeeping and city hops
Toentje initiated the local honey brand Groning!, a collaboration with a couple of city beekeepers, who are selling their honey to the wholesalers and in a way selling the beautiful story of city beekeeping as well. By buying the honey customers support Toentje and learn about the social enterprise and city bees. Toentje has also started to grow hop for a local brewery. A collaboration with social enterprise Gemüsewerft from Bremen. When the beer is ready for consumption Toentje organises a party and the beer is sold to local retailers who help spread the story and support the local food chain.

Online cooking lessons
Toentje works with their neighbours. The district where Toentje is situated, Oosterparkwijk, is being upgraded, including the merging of two schools. Toentje came up with a plan to grow vegetables and cook with the pupils in mixed groups from both schools. In this way the pupils got to know each other before the schools were united. The first year was a success but unfortunately when Covid-19 arrived their scheme could not continue. As an alternative they are now preparing online cooking lessons, which could be used by any school. Goal of the online lessons is to make children and their parents cook together with local food and easy to make recipes and at the same time make vegetables popular.

Next step
Toentje is still broadening its activities; e.g. cooking lessons for different groups, a plan for a Food circus, teaching people in different districts and schools to cook with healthy affordable ingredients. Recently Toentje has teamed up with AOC Terra (intermediate vocational education for green and agricultural professions) and producers in the region to grow more fresh products for the food bank. Toentje still relies on funding, but their impact has  increased over a relatively short period and they have inspired others as well. Three more gardens in the region now grow food for the food bank. They advise on several kitchen garden projects, also in the rest of the Netherlands, amongst them one from the homeless shelter.