Introduction
Rural regions are strongly influenced by agriculture since the meadows, pastures and fields are formed and shaped through the daily work of the farmers. But the relationship with the products resulting from farming is increasingly disappearing. The farms are considered part of a bigger picture, lacking the individual stories behind the farms. As a result society is disconnected with agricultural production.

Melkhus – Have a break, have a glass of milk!
The idea for the Melkhus was developed in 2001 by Friedel Schumacher, a farmer from Rheiderland together with her daughter. Today, the “Melkhus” is a legally protected name for rest stops in Northern Germany. They are mainly located on cycle paths, mostly on farms where you can have a rest with milk specialties like fresh milk, mixed milk drinks, quark dishes or a cup of coffee.  Milk and dairy products from the grassland region are brought closer to cyclists and hikers and at the same time a connection between agriculture and the public is established. Besides milk in many flavours and variations there are other products made from milk, such as curd cheese, yoghurt and cheese on offer. The small green wooded houses with red tiled roofs benefit from the fact that the opening hours of other restaurants in the rural region are limited. Moreover, they benefit from the fact that it becomes more and more popular to spend holidays in the countryside, hiking or cycling. The small “Melkhus” houses are very popular for a break both among tourists and locals - the short stops often end with talks about agricultural topics, the scenery and excursion tips. 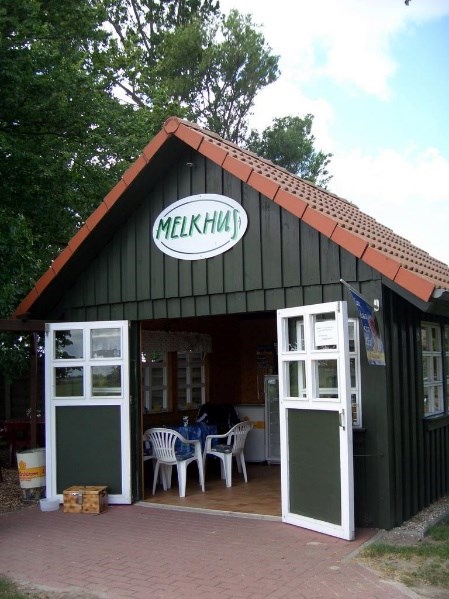 Results
Since the beginning of the initiative, the awareness and popularity of the houses has increased considerably. The initiative was soon promoted by the local rural women's associations since the low investment costs, the manageable amount of work and the practicable concept fit into the everyday life of many female farmers in the area between the North Sea, Jade Bay and the Weser. Therefore, the interest of the women in the initiative was great and 75 “Melkhus” houses exist today in Lower Saxony, opened from April to the end of September between 11 a.m. and 6 p.m.
The “Melkhus” houses are supervised by the Landesvereinigung der Milchwirtschaft Niedersachsen e. V. which also supports the initiative by financing merchandise articles. In addition to the small EU-funding for the establishment of the houses, the “Melkhus” houses give the possibility to generate a reasonable profit in the summer season. In addition to the marketing effect for the dairy industry, some houses also benefit from catering orders for private events or have managed to promote themselves in an extraordinary way: e.g. the “Melkhus Cornelius” is located in Seeverns and very close to the North Sea. This Melkhus offers not only a possibility for a break and the special “buttermilk-tango” (buttermilk with mango-passionfruit juice). Above this, the Melkus offers their location for wedding celebrations as well.