Lousbergmarkt is a covered market that first opened its doors in September 2016 within the city center of Ghent. Once upon a time there was a cheesemaker at this location, called het Hinkelspel. From 1982 the cheese was produced within the city. Due to a growing cheese production and more strict food hygiene measurements of the European Union, they decided in 2011 to move the production to a village close to Ghent, but the shop would remain at its original location. The production hall was empty and recently got a new function: a covered market hall. Four local businesses joined forces to create high-quality traditional craftsmanship with local products and the new Lousbergmarkt was born, an idea that comes from the South.

Four local businesses joined forces
HET HINKELSPEL has been making raw milk organic cheeses for more than 30 years. Sixty percent of their cheeses is of own production, made with milk from East and West Flanders. Most other cheeses are made in Belgium as well with a focus on local production. "Since a long time, we have good connections with Walloon cheese makers" says Alexander Claeys, co-founder of Het Hinkelspel.

The second pole of the market is DE VROENTE, a cooperative store, offering organic fruit and vegetables fresh from the fields of three farms located in the Province of East Flanders. Eighty percent of the retail offer is cultivated on three farms that are located in a radius of 30 km from Ghent. Vegetables with few kilometers. And as they want to offer their customers a wider range of products, 20 percent of their products originates from wholesale.

COPAIN, as the name suggests, is a cooperative bakery. Toon Van der Meeren former employee at the cheesemakery ‘het Hinkelspel’, founded this bakery with two other working partners. CoPain also tries to work with local raw materials. For example, the spelt and rye comes from a nearby stone mill that supplies itself locally as much as possible.

Lousbergmarkt hosts also a cantina run by two sisters who share a love for vegetarian cuisine, de DOCHTERS VAN DE JAEGHER. They use all the ingredients of those three vendors mentioned above and more to turn out healthy takeaway or dine-in meals.

Next steps
Lousbergmarkt wants to start a conversation with their consumers to clarify the ecological and social reasons behind their concept. For example, they want to make the costumers clear why they cannot offer tomatoes throughout the year and why they prefer not to offer vegetables that are grown by people who receive only a minimum wage. In addition they set up a pop-up corner in the market were they are inviting new local producers to sell their products. 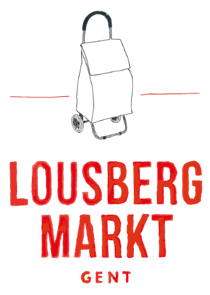