28 March 2022 - Published by Lisanne van ‘t Hoff
Kolding Municipality has laid the groundwork for a focused effort to work on the green transition through the municipal sustainability strategy. In relation to the transport area, the Municipality, in collaboration with the Danish Technological Institute, has prepared the first phase of a conversion plan for the fleet of cars and machines, in the Municipal Waste Department, with the aim of laying the lines for a significant reduction in CO2 emissions.

The conversation plan was divided into two phases. In phase 1, an overview was created of the fleet in terms of fuel consumption, CO2 emissions and costs for each individual vehicle and machine.

In this phase 2, the purpose was to create an overview of possible technology choices within four main fuel tracks, which are:

The fuels natural gas and hydrogen were also included in the project's early considerations, but were deselected as real possibilities for three reasons:

The result of the work will contribute to the Municipality's decision-making processes in the future and is summarized in a one-pager, which forms a quick and clear overview of investment needs, fleet economy and CO2 saving potential within the four fuel tracks.

Although specific vehicles and machines are recommended here in the one-pager, these are not necessarily the best choices in two to three years as the market, especially for electric trucks, is developing rapidly. The case examples in the one-pager are based on the current technical stage for cars and machines and are intended as an experience base for future purchases and offers of passenger cars, vans, cranes and trucks and machines, respectively.

During the process of creating the one-pager and report on the benefits and costs of different fueling systems and the infrastructures required, Kolding Municipality Waste Department had to decide which strategy to employ in the transition from fossil fuel to green energy.

The one-pager clearly shows, that electric vehicles have the highest impact, while diesel has the lowest cost. If the department had unlimited capital, a direct transition to electric vehicles would be ideal and have the highest impact. On the other hand, staying with diesel fuel for a few more years, would increase the budget for future spending and allow for a cleaner transition as the local infrastructure and the market in general would mature further. 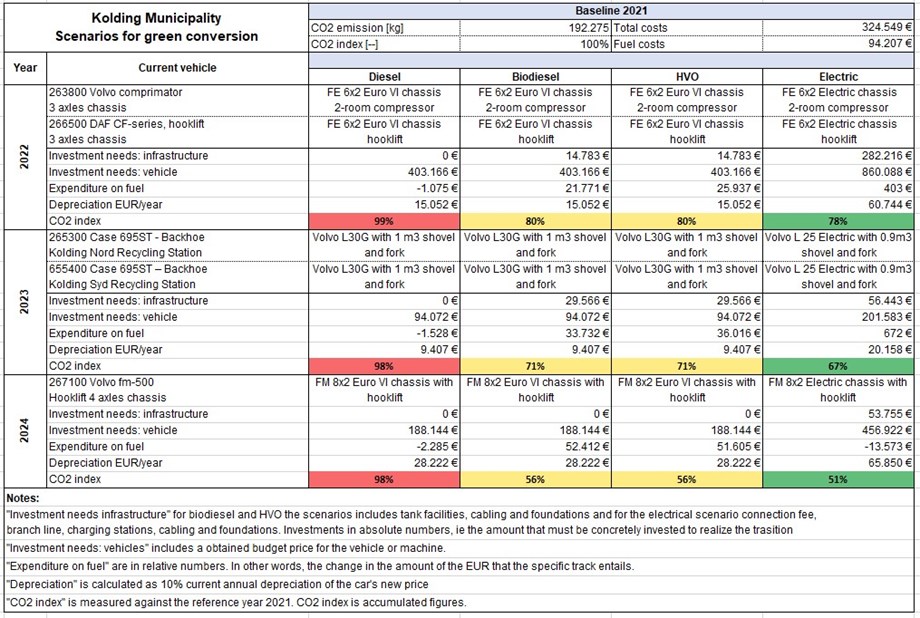 In the end, the strategy that was employed was a compromise between the two. Setting up a local fueling station for HVO would allow us to mix it with diesel in relative amounts. This approach gives the department a high degree of control over cost and the ability to have an instant impact on CO2 emissions.

This choice carries its own challenges, as it seems unlikely, that there is enough biomass from waste and surplus material to produce enough biofuel for every one. This will result in the use of virgin materials and will strain the biomass quantities required for food production. This is already a problem with some types of food and the problem will only increase as droughts and floods become more widespread and increase in frequency.

As such, we view HVO as a transition fuel, which allows us to reduce CO2 emissions while waiting for the electric infrastructure and electric vehicles that carry a higher load and have longer reach.

The life span of electric trucks are also a problem, as the battery pack only has an expected life span of eight years - after which the consumer is expected to invest in a new vehicle. This seems like an environmental waste, as many other parts of the vehicle have a much longer life span. A more modular approach would prolong the lifespan of each module significantly – like it is the case with fossil fueled vehicles.

Based on the above we chose to invest in HVO as a first step in our transitions to greener emissions. This allows us to make an immediate transition, as most of our trucks can already use this fuel type, and reduce CO2 emissions on six trucks immediately (92 ton CO2 reduction) and eight trucks and one 3,5t vehicle within two years (135 ton CO2 reduction).

There is no right approach for vehicle propellants, as all of them have drawbacks and harm the environment to various degrees at different stages of their respective lifecycles and/or production of propellants.

Additionally, infrastructure turned out to have a much higher impact on the overall calculations than expected. It is interesting that this topic and the hidden costs associated with this aspect, are rarely brought up as a barrier.

Electric vehicles can carry less weight and have shorter reach, which means that more vehicles are needed to cover the same amount of tons per hour. This means increased emissions from the production of vehicles and an additional need for infrastructure.

This should be included in the considerations when aiming at reducing CO2 emissions.