Building a case for circular construction

25 September 2022 - Published by Lisanne van ‘t Hoff
Constructing a circular building is a complex process involving a range of aspects. We caught up with An Eijkelenburg and Emiel Ascione to talk about their experiences on two different circular building projects in Mechelen and Westerlo in Belgium. As it turns out, both projects are highly replicable and make a strong case for the industry to pursue circular building.

De Potterij is a former laundry business in the city of Mechelen in Belgium. In 2015, OVAM, the Public Waste Agency for Flanders, bought the heavily contaminated site for the symbolic sum of one euro to clean it up. The catch, however, was that decontaminating the soil would make it impossible to redevelop the site for years. In the interim, OVAM decided to make the accessible parts of the building temporarily available to two local organisations that share their circular ambitions: Klusbib and Ko-Lab. Klusbib is a tool library where the city’s residents can borrow tools to do work on the house or in the garden. Ko-lab is a collaborative laboratory for crafts, technology, the arts and science. Miss Miyagi and BUUR got the assignment to further investigate and start redeveloping the site into a circular hub in the long term. 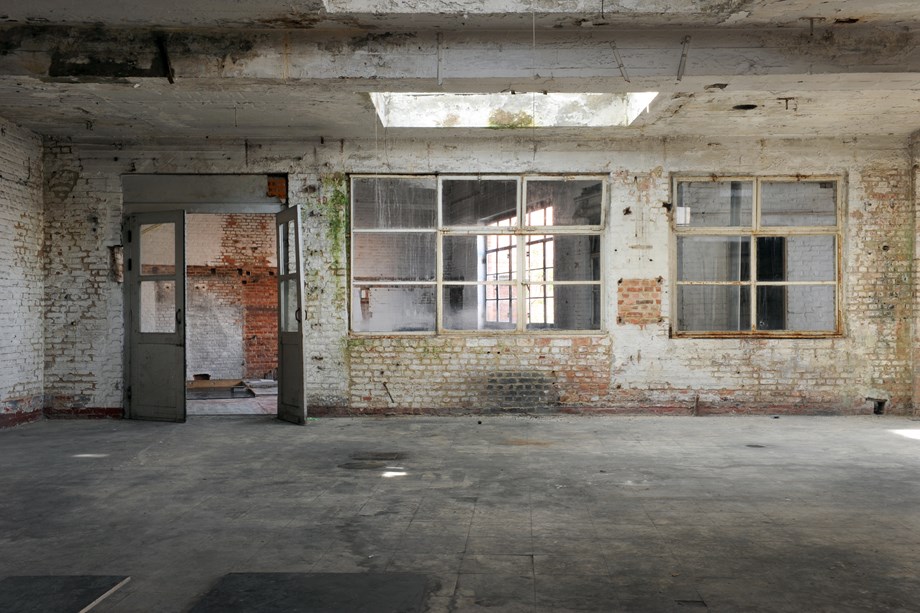 ‘OVAM was investing up to 2 million euros to clean the site,’ says An Eijkelenburg. ‘When we walked into the Potterij, we decided we didn’t want to sell it to someone who will build luxury lofts. The building has a kind of poetry about it. It’s an old industrial building with a very open structure and daylight that comes in from above. That’s when the idea of the circular hub was born. We decided we wanted to do something for our community and return the investment that society made in cleaning up the site.’

The living lab refers to the fact that the temporary use of buildings can be a good laboratory to test and feel how circular buildings and building products behave. The initial idea was to accommodate Klusbib for two years in a modular construction design that could subsequently be moved to another location. ‘We built a skeleton in the space first, and then a box within that’s made of circular building materials, such as the floor, walls and ceiling. The challenge in developing the box is to have the right grid, because modular building materials usually have a fixed size. So when we designed the box we had to make sure all the parts could be connected and work as a whole. And equally important, that we could easily disconnect them so they could be reused elsewhere.’

Given that the circular economy is still a long way from being the ‘new normal’, how does one go about procuring the materials and services for such a project? ‘In fact, we didn’t do much in terms of procurement. Most of the producers were happy to sponsor the project by making their circular building materials available because our project has a lot of visibility. It has its place in our local community and the larger circular building world. So they were happy to drive up in their trucks and unload the materials for free.’

What did need to be procured was the visibility. ‘In return for the free materials, the producers wanted exposure,’ Eijkelenburg says. ‘For OVAM, it is also important to show the world that circular products are not just a gimmick but that they’re high quality and useful in the real world.’ To display the success of this project to the outside world, Circular Flanders and Interreg NSR ProCirc hired Fugzia to develop a digital 3D environment that allows viewers to actually stand in the ‘box within the box’ and look around (http://vlaanderen-circulair.be/kijkbox/home).

The various construction layers and technical details are accessible through QR codes. This system will enhance the impact of the project as more viewers take a tour of the facility. ‘Viewers can go into individual layers, which are all tagged, and discover everything they need to know about the acoustics, the isolation materials beneath the floor, you name it. And they are also given links to the websites of the manufacturers.’

Kamp C is an autonomous provincial company in the Belgian province of Antwerp. Its key focus is to accelerate the transition in the building sector from traditional processes to circular construction. ‘When Kamp C was in need of a new office building, we decided to simply go through the entire process ourselves,’ Emiel Ascione says, ‘and share it with the construction industry. So essentially our goal wasn’t so much to build a perfect, new circular office building, but more to start this journey, see where it takes us and share it with the industry.’

Kamp C specified that a consortium be built to construct ‘t Centrum, which is the first fully circular office building in Flanders. Fully circular because Kamp C covered all aspects of circularity in its design, which it has summarised in seven pillars (see figure 1). 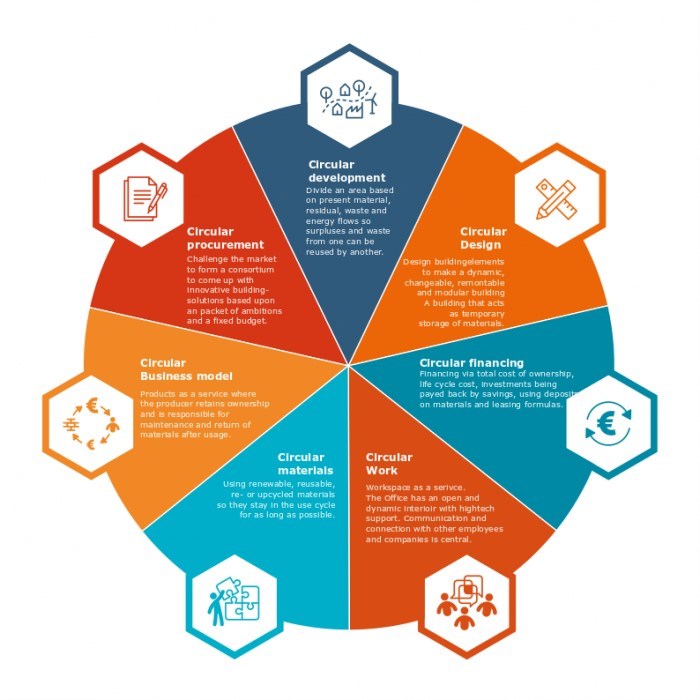 In that respect, this project successfully achieved several of its aims. One is that it be future-proof. ‘You can entirely dismantle our building, even the roof construction. It’s an open structure with moveable walls. Our materials passport is an innovative system linked to the 3D model used for the building. So even if the people originally involved in the process cannot be consulted in 10 or 15 years, anyone can find out, just by clicking on these elements, how to dismantle the building. It’s all there down to the last detail, including which screws were used and where.’

Another aim that the building succeeded in achieving is to have an open building with open staircases that encourage interaction and promote the well-being of the occupants. The lifts, for example, have been pushed to the corners of the structure and are thus less accessible than the stairs. There is an elaborate building management system that monitors carbon measurements, air, humidity, temperature and incoming light so it can make the most of natural light. ‘We hope this will encourage the industry to go down this path as well. The main point is that this is an accessible and replicable way of making a building. It looks like a regular office building. There may be more iconic circular buildings out there, but they’re hard to copy to another place. So I think we’ve shown that it’s possible to create a circular building in a regular way on a regular budget.’ 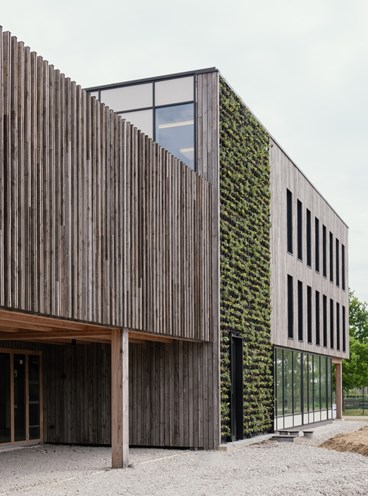 When Kamp C started to think about building a new office in 2018, it felt a strong need, from contractors and architects, to do things differently. ‘Normally the procurement processes are hierarchical and conflict-based. Someone writes out a tender and bids on the lowest price. There’s always a candidate with a low price. It dissects the procurement document, looking for the errors, and that’s where the profit comes from. The incentive is not right.’

That’s why it was important from the outset to get the right parties around the table with a similar, circular mindset. ‘We organised masterclasses in 2019 and invited well-known speakers, such as Thomas Rau to speak about circular procurement,’ Ascione says. ‘And we took the opportunity to highlight our plans.’ In the end, these masterclasses attracted considerable interest. They enabled interested parties to team up and start cooperating. ‘They also acted as a kind of natural filter, without wasting anyone’s time. Apart from a trip to Antwerp, no one had to fill in lengthy procurement documents.’

Seven consortia ended up expressing interest. A jury with an independent chair narrowed the choice down to three. Then dialogue sessions were held with each of them to talk in detail about the procurement documents and improve them where necessary based on feedback from all parties. The winning consortium consisted of seven companies: Beneens, TEN, STRENGth, Muurtuin, West Architectuur, Tenerga and VITO. Ultimately, the circular procurement process is likely to impact the industry. ‘The documents are all there on our website,’ Ascione says. ‘I’ve noticed that many organisations are interested to find out more about the process, and we’ve essentially made a template available.’

While the process leading up to the construction of ’t Centrum took several years, the actual building took 11 months and was completed in the spring of 2022. Cooperation was a key driver of success in the project, according to Ascione. It can dissolve the fragmentation that exists in the industry but also internally in organisations when it comes to setting up a circular project. ‘The most important advice I can give is to try to get people with the same vision around the table. It’s not enough to have one party willing something.’

An Eijkelenburg, previously the project manager of De Potterij at OVAM and currently works for Stadsmakersfonds, who are involved in developing the area around De Potterij into a circular hub for the city of Mechelen.