MacGregor has developed and built its first fiber rope crane

“Since 2010, fiber ropes have been on the agenda for MacGregor. We are confident that fiber ropes are the future for offshore cranes. On the other hand, the market has been reluctant to order the first of such cranes. Therefore, we had to build a fiber rope crane ourselves, to showcase and prove that the technology works,” said Høyesen.

Recently, he proudly presented the new crane for shipowners, operators, oil companies and other invited guests at a ceremony in Kristiansand.

“The crane is a direct result of a great team of MacGregor technologists and their enormous expertise in lifting technology, an area in which MacGregor is the world leader,” said Høyesen.

Fiber ropes have several other advantages. The rope can be cut and then spliced again. Splicing can be done on board the ship or platform. The rope can also be extended.

Fiber ropes do not rust, do not need to be lubricated, and are also more environmentally friendly. Ropes can be inspected internally and a camera system located by the winch constantly monitors the state of the rope.

MacGregor has been testing the fiber rope crane since October last year and recently found an occasion to show the final result to potential customers. 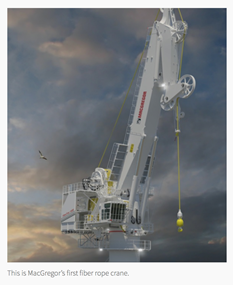 “The main purpose of the demonstration was to win the trust of our customers and the market in general,” says Høyesen.

One of the customers, Stuart N. Smith, Vice President Asset Development in Subsea 7, liked what he saw.

“I’m very impressed with what MacGregor has come up with, and how they’ve combined advanced technology to build a new product. This is certainly of interest to us. When a smaller crane can do the same job as a larger crane, a smaller ship can potentially also be used for offshore crane operations. That means big cost savings,” says Smith.

“We have received a lot of positive feedback today. Several of our customers are considering fiber rope cranes. I am sure some of them will buy one,” says Høyesen.

Both the technology and the crane are approved by DNV-GL.