A unique series of autonomous operations trials were held on the North Sea 19-20 March, about five nautical miles off the coast of Den Helder (NL). SeaZip 3 was outfitted with collision avoidance technology and took part in several nautical scenarios to determine how the vessel would interact with seagoing traffic. The trials are part of the Joint Industry Project Autonomous Shipping, a two-year research & innovation project started in 2017 and focused on autonomous operations of seagoing vessels.

“We are proud that our consortium of 17 partners established the first ever autonomous operations with seagoing vessels held at the North Sea”, comments Marnix Krikke, innovation director at Netherlands Maritime Technology (NMT),  project leader of the Joint Industry Project and PERISCOPE partner: “A total of 11 scenarios were run in which SeaZip 3 interacted with two other vessels, Octans, a training vessel of the Maritime Institute Willem Barentsz and Guardian, an Emergency Towage Vessel operated by The Netherlands Coastguard. These scenarios are the outcome of research by Technical University of Delft, MARIN and TNO. The scenarios were first tested in the MARIN simulator centre in Wageningen and now, last week, in a real-life environment on the North Sea.” 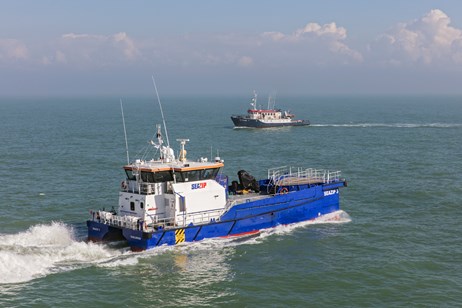 By testing the scenarios on the North Sea, the partners involved were able to show the decision-making process of an autonomous system in ensuring safe sailing and avoiding collisions with other vessels. Despite the autonomous system performing the evasive manoeuvres in a safe way, it was concluded that further development of autonomous systems is needed, to cope with complex marine traffic situations in a more efficient way.

The demonstration provides input for an autonomous shipping roadmap which will define the lessons learned and the obstacles, technology and potential as well as the steps to be taken towards further realisation. The roadmap will guide development of technology within the Netherlands maritime industry, the knowledge institutions, the academia and the government. These include not only technical issues but also those in the regulatory field and aspects such as risk management.

This Joint Industry Project is unique in that it is supported by a broad consortium of stakeholders, from shipping companies to shipyards, to naval architects to technology suppliers, to knowledge institutions and marine academies to classification societies, to the Dutch government. The project coordinator is PERISCOPE partner Netherlands Maritime Technology.