On the 6th of June, the AV Pilot in Varberg is planned for take-off in a crowded and popular area of the city. This particular area is challenged with heavy traffic during summertime, hence the AV could be part of a future solution. However, such a solution raises new challenges in itself. The AV for the pilot is an Easy Mile model EZ10. The AV will be trafficking a route down by the waterfront. The area is very popular among both tourists and citizens of Varberg, which leads to over-population in the summertime. It has long been a problem for the authorities as well as for the residents of the area where heavy traffic, access for goods transports and emergency vehicles, and lack of parking spaces are the greatest and most urgent challenges. One aim of the project has therefore been to try out and evaluate an AV together with pedestrians and bicycles, and at the same time limit the access of the regular car traffic. To achieve this, car traffic is suggested to be stopped along some routes, and the AV together with bicycle and pedestrian lanes would then be the only mode of transport along the seaside. 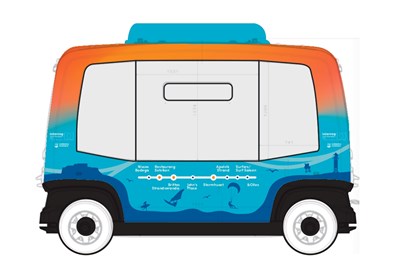 At an early stage of the process, stakeholders in the area were very positive to try new solutions to find a more sustainable situation in the area. The positive attitudes have however started to turn and falter throughout the process. Some residents of the area are worried that changes in car traffic might lead to heavier traffic in other parts of the residential area. And restaurant owners in the area have expressed worries that restrictions in car traffic might lead to fewer customers. To sum up, the biggest challenge so far has not been the suggested use of an AV but instead what the changes of the existing circumstances might lead to. As much as change can be scary and unknown, it is also necessary for trying new things and finding new solutions.

Don't miss any updates on the Varberg pilot follow PAV on social media below!