Project partner Hannover Region held an initial roundtable for the test operation of the autonomous shuttle. After an introductory presentation of the topic of autonomous driving by Rupprecht Consult, the embedding in the Interreg project "Planning for Autonomous Vehicles (PAV)" was highlighted.

Project Manager Ms Göbler presented the connection between the tram stop "Schönebecker Allee" and the Garbsen campus ("Garbsen-Mitte An der Universität") with a total length of approx. 2 km. Currently, the line, which has 2 stops, is operated with a 10-minute interval and a journey time of approx. 2 min with a standard scheduled bus. At peak times, the bus is very full, but also frequently runs empty. The autonomous shuttle will supplement the regular service for at least 3 months. 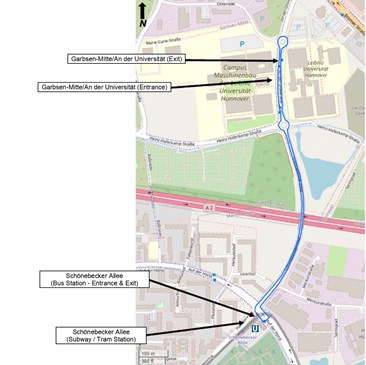 All 15 participants at the round table received the project very well. Especially the participants of the municipality of Garbsen and the public transport company’s regiobus and Uestra used the opportunity to point out the importance of the project from their perspective. Similarly, many meaningful questions raised about the process of project initiation and implementation of a shuttle, because vehicle, operation and route are subject to certain requirements and framework conditions. Particularly important is the restriction of the maximum speed of 30km/h on the line. The bus stops will remain at their current locations, and the control centre technology should be able to handle the planned mixed traffic. The infrastructure should be changed as little as necessary, but without disregarding necessary modifications (e.g. marking and signage measures). In addition to infrastructural conditions, topics such as citizen participation were also discussed in a goal-oriented manner.

The first round table was a big success and further round tables are set to be held at regular intervals over the next few months in a similar constellation.

To stay up to date with the PAV project and all of the pilots follow us on social media using the links below.