A GWCT student's perspective on our visit to Denmark

01 September 2022 - Published by Francis Buner
After a very interesting trip to Denmark with the Interreg NSR PARTRIDGE Project, it’s safe to say this country is on the re-visit list for a lot of us. The Danish Hunters Association (DHA) joined the project in Autumn 2019 and whilst we don’t have a demonstration site there, they certainly have some incredible ongoing research projects and a lot to teach us about their agricultural system and how grey partridge conservation works in Denmark.

We started our visitation by heading to the DHA’s headquarters - Danmarks Jægerforbund - in Mols Bjerge National Park to hear more about these research projects. Here, Carsten Riis Olesen presented his studies on grey partridge predation and the diet of partridge chicks. Throughout our time working on the PARTRIDGE Project, we have learnt that a protein-rich diet of invertebrates is vital for chick development, something which Carsten confirmed is also generally the case in Denmark. 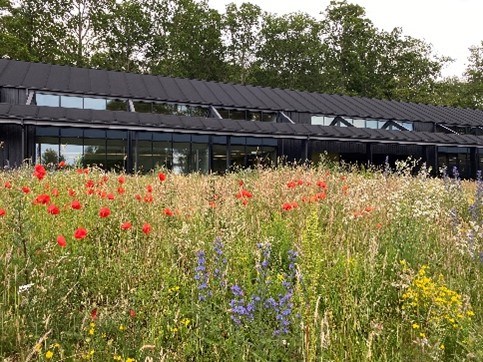 After Carsten’s presentation, we heard from Niels Søndergaard, Lene Midtgaard and Jakob Bergmann Nielsen about attitudes towards the hunting community across Denmark, ongoing invasive raccoon dog predation issues, and the Small Game Project. The Small Game Project is in many ways similar to the demonstration sites which make up the PARTRIDGE project - a ‘guild’ consisting of various stakeholders such as farmers, hunters, beekeepers, and conservationists work together on an area of land at least 1000-1500 ha in size to manage it in a way best suited for brown hares and grey partridges. This cooperation was fantastic to see and hear about, with those involved clearly passionate about increasing biodiversity and educating others to do the same.

We visited one such farm belonging to two brothers taking part in the Small Game Project - pig farmers with over 25,000 pigs between them - and saw some outstanding flower blocks and floristic margins which were teeming with insects, as well as some rare arable flora to excite the botanists among us. Their passion for farmland wildlife came across very clearly and by listening to the recommendations of the DHA and putting them into practice, they have seen a noticeable difference on their farm. 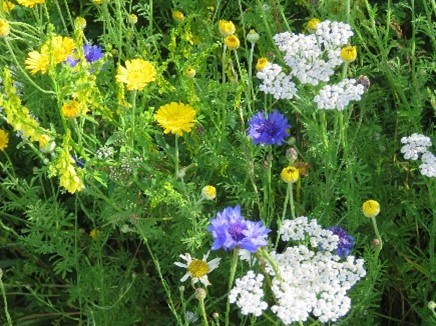 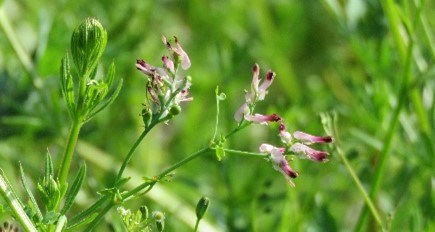 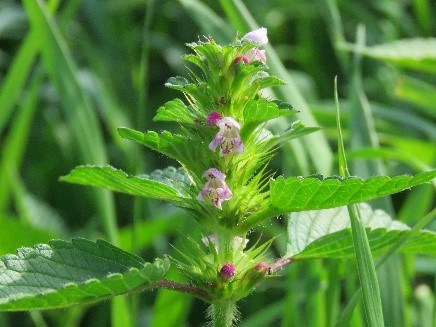 Jakob also highlighted the fact that intensification has caused changes to the agricultural landscape over the last couple of decades to meet the country’s colossal exportation demands. This raised discussions about the extreme efficiency of Danish agriculture and how farmland species diversity has not been prioritised in the drive to increase profits. Without the Danish government providing agri-environmental schemes too, there is a limitation in the financial support given to farmers to manage measures such as flower-rich field margins, hedgerows, and beetle banks and thereby provide suitable habitat for farmland wildlife. Currently in Denmark, planting measures more than 10m wide means a loss of income for the farmers and with the PARTRIDGE project recommending strips of at least 20m wide, this is frustratingly little.

However, there are other motivations behind farming for nature and on our second day we visited a farm with shooting interests. Here we saw a pheasant breeding programme known as ‘rearing under bantams’ which uses female chickens to hatch pheasant eggs and raise the chicks in an enclosed outdoor space alongside the hen. This technique has been used in the UK widely, particularly during Victorian times, although this farm gives it a slight twist – once the pheasants are old enough to be released, the hen they have been raised with is placed in a box high up in a tree. This persuades the pheasants to roost in the tree with the hen and therefore reduces the risk of predation at night and gives these released birds better natural survival instincts. Leader of the PARTRIDGE project Francis Buner commented to the rest of the group: “If, God forbid, the grey partridge ever goes extinct in your countries, despite all of your best efforts, then the only hope you have of recovering them is through bantam, or even better, parent-rearing.” Parent-reared grey partridges are either released in an entire family group or juveniles are adopted by wild barren pairs. This method gives the birds much higher survival rates than hand-released birds which are more commonly used for shoots because they learn important behaviours from the adult birds. 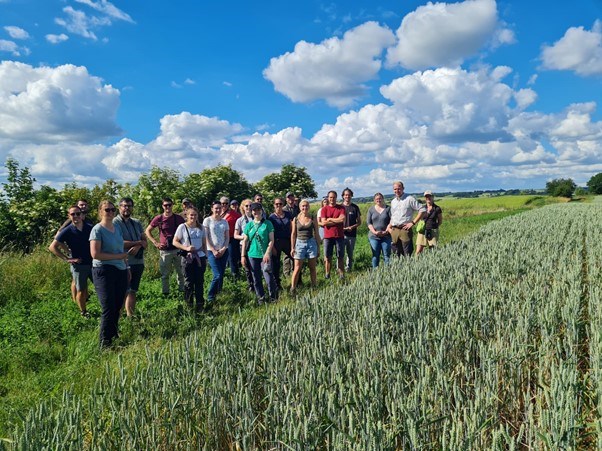 Having seen some fantastic farmland sites, we were also taken on an educational trip to ‘Mols’ rewilding project where Galloway cattle and Exmoor ponies roam free within a large, fenced area. These species are used for grazing in an effort to monitor how ‘natural’ disturbance can impact the biodiversity of this area over an extended period of time and bring the landscape back to something resembling a few hundred years ago. In the absence of a top predator, humans play a role in population control by removing sick or injured animals from the pack, but the numbers are still increasing year on year and overgrazing could become a concern in a landscape dominated by common broom which the livestock do not eat. We learned that this project has very divided opinions, with the public raising concerns over the ponies’ welfare and generally disagreeing over the running of the project but so far, the efforts to restore these wild areas do show promise and it will be interesting to see its progression over the course of several decades.

However, considering that over 60% of Denmark’s land is used for agriculture, the question needs to be asked; is this drive for rewilding going to be effective in addressing wider biodiversity declines? Reflection on this experience has reiterated to us how there is not one single answer as to how we tackle the current biodiversity crisis, but perhaps the importance of restoring farmland biodiversity has been overlooked within governing bodies. 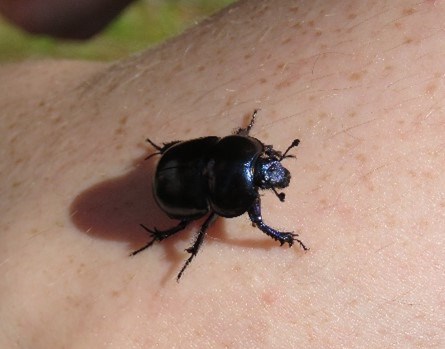 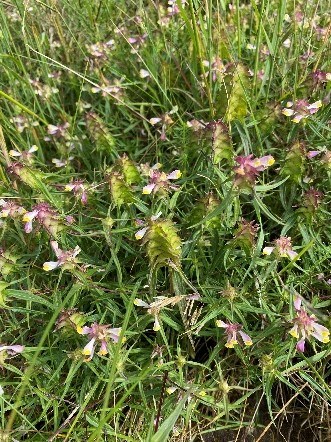 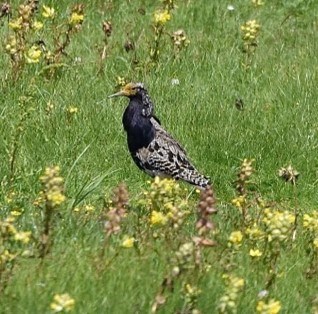 Later in the week, Rasmus Ahlmann (DHA) showed us around a farm located in the Wadden Sea National Park with one of the largest populations of grey partridges in the country and we were shocked to discover that these coastally situated birds have been known to eat a diet of mussels! This opportunistic nature came as a surprise to more than one of us and it brings hope that grey partridges may be able to adapt to different environments better than we had originally thought. We also ventured out onto the mudflats in the Wadden Sea, led by a local farmer, to explore some of the other biodiversity within the National Park including seagrass meadows, lots of introduced pacific oysters, some huge crabs, and nice coastal flora. A few of us had quite the surprise when the ground beneath our feet began to wobble and a flat fish wriggled its way out! This part of the trip was a fun bonding experience for the partners and an opportunity to learn about conservation efforts in an alternative landscape. Denmark has some extremely beautiful areas and a lot to offer both culturally and naturally, and the memories we made here have encouraged us to start thinking about booking another trip back to this amazing country soon.

Overall, this visit to Denmark with the Danish Hunters Association was full of interesting discussion and new information. It was an excellent learning experience and inspired people to think about the future of the PARTRIDGE project and the possibilities for future collaboration, perhaps with Denmark having a larger role to play. From a student perspective, we have not only had the opportunity to travel to a whole new country, but it has helped to widen our understanding of European farmland biodiversity. The PARTRIDGE project is a great demonstration of collaborative transnational science in action and being a part of it is greatly motivating and inspiring. Being able to discuss and solve problems free from the constraints of online meetings is important for driving progress and keeping up morale, and the experiences we’ve gained from these meeting are ones that we will remember for many years to come. We’ve observed species that we had never seen before, made lifelong friendships, and met so many amazing and passionate people through the project. We would like to pass on our thanks to everyone who helps to make these experiences possible, and to those who had to answer our numerous questions during these exciting trips.