The future of farmland conservation in Scotland: discussions with NatureScot at the PARTRIDGE demo site, Balgonie

12 May 2022 - Published by Francis Buner
Balgonie is an arable unit in southern Fife and is the prime demonstration site in Scotland for the EU Interreg-funded PARTRIDGE project, which aims to show how farmland biodiversity might be supported by management in future using the grey partridge as a model, but monitoring impacts on a range of species. The Game & Wildlife Conservation Trust has been advising on site management and recording outcomes at Balgonie since 2014, which became part of the PARTRIDGE project in 2017, and has seen a steady increase in grey partridge numbers, and some other farmland wildlife, over the period. We were delighted recently to have the chance to discuss some of our findings from the project and our thoughts on the future of farmland management, with the agriculture team from NatureScot during their second visit to Balgonie.

Dave Parish, GWCT Scotland, said “We are extremely grateful to the NatureScot team for visiting Balgonie. It was a great opportunity to update them on our work, share ideas and discuss the practicalities of habitat management and monitoring, and get an update on what future agri-environment schemes in Scotland may look like. Hopefully our experiences from Balgonie can help shape future agri-environment schemes in Scotland.”

The Balgonie team – those who help run the project at Balgonie with GWCT – were well represented, with folk from Kingdom Farming, Scottish Agronomy and Kings Crops fielding and asking plenty of questions during the varied discussions we had. The flower blocks were examined at length as we inspected them in the field. These are one of the simple measures introduced to support a range of wildlife from Grey Partridges to pollinators, some of which was in evidence on the day, whilst not being too onerous for those managing them. Much of the time was also spent considering what future agri-environment schemes might look like as NatureScot is currently investing a lot of effort in pilots testing outcomes-based schemes. Government policy in Scotland is likely to require at least 50% of farm payments to be based on environmental outcomes from 2025. So for example, if a farmer should choose to include hedgerow management in their plan in future, they will probably have to provide evidence as to whether the actions taken have delivered a hedge likely to support a range of wildlife. Deciding what that evidence will look like and how it is collected, is a key part of the pilots. And of course, hedgerows are just one element on the farm that might be assessed.

This isn’t as easy as it sounds because what constitutes good management for one species might not be good for others, so understanding multiple outcomes could be difficult, and of course any system has got to be reasonably easy to implement if it is going to be successful. Fortunately, at Balgonie we have monitored a range of indicator species throughout the period of habitat manipulation, so we may be able to help advise on what to expect and how best to measure impacts.

Stuart Shaw, agriculture policy manager at NatureScot, said “The visit was an excellent opportunity for NatureScot staff to learn about the farming operation at Balgonie, the GWCT PARTRIDGE Project, and Scottish Agronomy field trials. There was a really useful sharing of ideas about how to deliver sustainable food production while maximising on-farm opportunities from climate and biodiversity.  The discussions ranged widely from in field management (arable margins, wildflower mixes, integrated pest management, soil health) through to broader issues such as the climate and biodiversity crises, the future agricultural funding framework, and the need to effectively blend public and private finance. We gained many valuable insights from our knowledgeable hosts, and look forward to further opportunities for such two way sharing of ideas.”

Dave added: “It would be great if future agri-environment schemes included guidance on growing the flower blocks used at Balgonie, as they’ve proven their worth to birds, mammals and pollinators alike already. We hope discussions with NatureScot will continue and that they may be able to visit Balgonie again in future.” 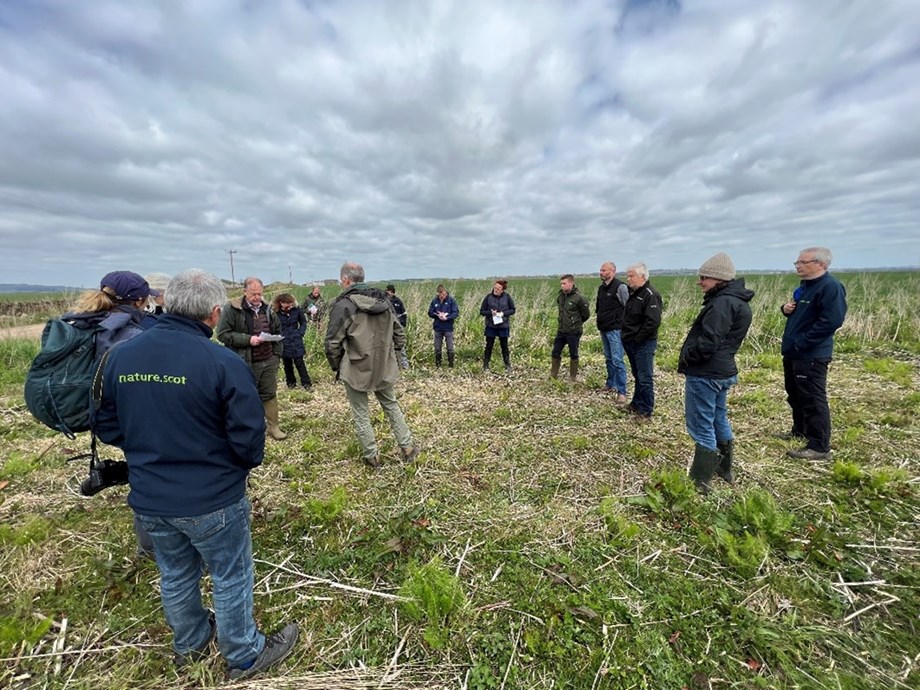 The group in discussion next to an emerging flower block. 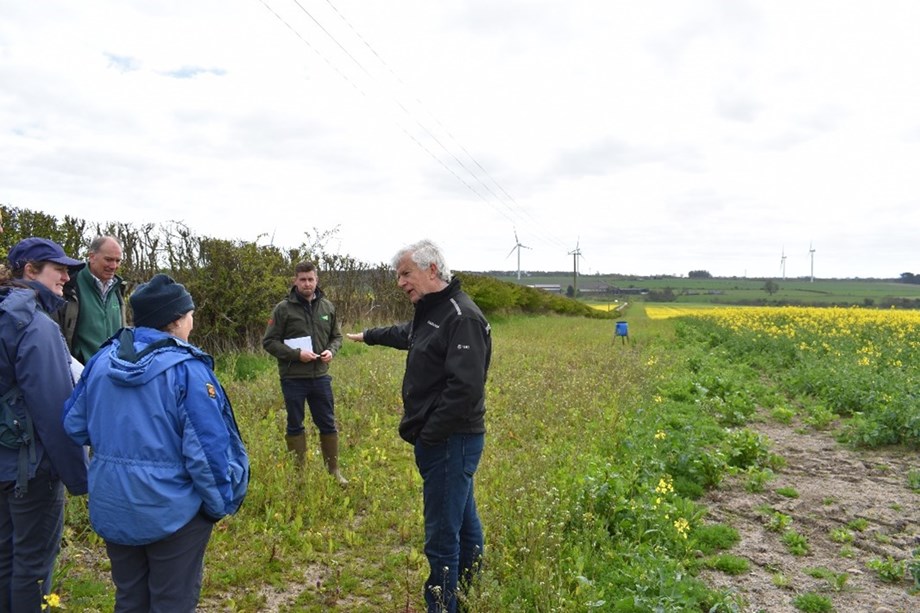 John Drysdale (right), Balgonie farm manager, explaining how he aims for productive farming alongside a significant commitment to conservation.

Bumblebees enjoying flowers in one of our measures at Balgonie in the summer last year.