This was kindly hosted by Alastair Salvesen and his gamekeeper, Graham Rankine, with Dave Parish and Ross MacLeod of GWCT, and Keith Cowieson of Songbird Survival taking part. The BFBC is a celebration of all the hard work that farmers and land managers put into the countryside in support of wildlife, and shows, hopefully in a fun way, what can be achieved. Whitburgh Farms is an excellent example of this, as a lot of hard work has gone into nurturing a Grey Partridge population there for many years, with acres of new habitat created, hundreds of feeders used in winter and legal predator control in place. The Grey Partridge have benefited enormously, along with Brown Hares, Barn Owls and many species of songbirds. 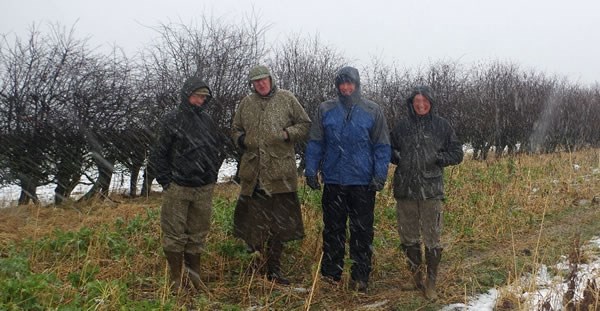 Despite the snowy conditions on the day, 30 minutes observing one of the many cover crops on the farm revealed 14 species of birds totalling 106 individuals. The stars of the show were Chaffinch, with a flock of 60 individuals flitting between the crop and one of the nearby feeders, with 19 Yellowhammers and a few Reed Buntings doing the same, and five Grey Partridge providing the icing on the cake. It wasn’t only the grain-eaters that were drawn to the abundant food source: one of the local Sparrowhawks also made an appearance looking for a meal, though he went unsatisfied on this occasion.

Whitburgh Farms is an excellent example of how practical measures can make a real difference to farmland biodiversity. This site is now one of 10 across northern Europe taking part in the PARTRIDGE project, funded by the North Sea Region Interreg programme. This aims to show what can be achieved when the right measures are put in place, in the appropriate amounts, by farmers on the ground and importantly how these measures should be part of local Agri-environment Schemes, which are often the only practical means of supporting farmers in their efforts.

One of the principal elements all demonstration sites are implementing is a novel cover crop comprising many species of plant, all providing different resources at different times of the year. Whitburgh has already started introducing this crop with more planned in 2018, so hopefully next year’s BFBC will be even better!