14 May 2018 - Published by Paul Stephens
The fifth partner meeting of the North Sea Region PARTRIDGE project was held last week in Scotland, with the base of operations at the Royal Botanic Gardens in Edinburgh, followed by a trip to Whitburgh Farms in Midlothian, to see first-hand the progress at this PARTRIDGE demonstration site.

This project aims to show how the introduction of quality conservation habitats to 10 demonstrations sites, two each in Scotland, England, Germany, The Netherlands and Belgium, can increase the numbers of a key indicator species, the Grey Partridge together with other farmland wildlife of conservation concern. Each site is striving to convert 7% of the arable area into such habitat: the level thought necessary to support stable or increasing populations into the future, along with the provision of feeders in winter and legal predation management where acceptable.

It was great to see that much progress has been made in the first 18-months or so of the project across all partners: many of the continental demonstration sites have already exceeded their habitat targets, feeders have been introduced on all sites, the first Beetle Banks  have been introduced in the Netherlands and Belgium, and agreements have been made with various other land managers to improve the way they alter the landscape in quite significant ways for the benefit of farmland wildlife.

One of the major innovations being tried across all demonstration projects is a new PARTRIDGE cover crop consisting of many different plant species, designed to provide year-round resources – insects for young birds, cover from predators and winter food. This mix varies slightly from country-to-country to suit local conditions, and each country faces its own challenges in producing successful plots. For example, in Scotland there seems to be a much heavier weed burden that needs to be dealt with so the crop is not choked out. This produced a lively discussion at Whitburgh, where many of the continental visitors – who do not seem to have the same problems – were surprised that the farm manager relies on glyphosate (a general-purpose herbicide) to help prepare the ground and control weeds, notably docks and thistles, without which the crop would not thrive and so not have the desired impact on biodiversity. There is much debate in the EU at present about whether to ban this product, a tool that in the UK is regarded by most farmers as essential to produce wildlife habitats, not to mention food crops.

Mr Alastair Salvesen, the owner at Whitburgh, commented “It seems surprising to us that several of our visitors were so against glyphosate, a product that we find so important when farming in this northern clime, whether it is to kill the crop and make it ripen just before harvest, or just to control significant and persistent weeds of many types.”

Another important component of the farm tour, and of the routine management at Whitburgh, is supplementary winter feeding and predation management. Graham Rankine, the gamekeeper at Whitburgh, explained the strategy and what his annual routine consists of, with detailed explanations of Scotland’s legally used traps. Although a controversial topic to most of the European visitors - as many commonly used trapping methods in the UK are not legal in other parts of North-Western Europe – a constructive discussion was held with information exchange and mutual understanding at its core.

Nevertheless, whatever the views on these issues, there is no question that the team at Whitburgh are making significant progress  as Grey Partridge numbers have increased to the point where a small, sustainable shoot could start in 2017.

The ultimate aim of PARTRIDGE is to influence future agri-environment schemes and it is exactly the discussions held last week that are so important in that process. Fortunately, we had several policy influencers present at Whitburgh from across northern Europe, so hopefully they found the event useful and inspiring too. 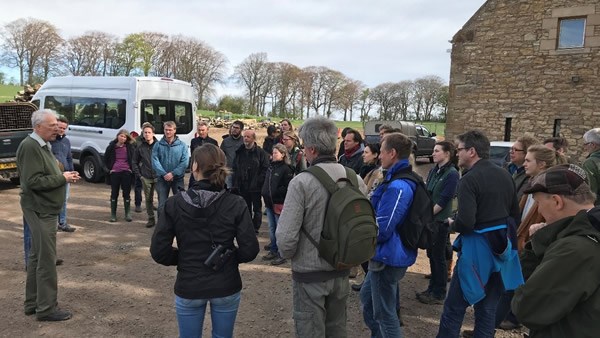