Spreading the PARTRIDGE message in Denmark, an update from one of our new project partners.

The Danish Hunters Association is one of the new partners of the North Sea Region PARTRIDGE project, joining the project in January 2020. Our role in PARTRIDGE is to share and spread information about the project and its aims in Denmark.

On the 4th of February 2020, Organic Denmark organised a meeting to discuss nature, wildlife and biodiversity on Danish farmland and plans regarding the upcoming Common Agricultural Policy (CAP). On the speakers list were Birdlife Denmark, Landbrug & Fødevarer F.m.b.A -SEGES, Aarhus University, The Danish Society for Nature Conservation, The Danish Agricultural Agency and The Danish Hunters Association.

The new CAP is expected to be implemented by the beginning of 2022.  In early 2021, Denmark will present its recommendations on what should be included in the new CAP. In the light of this, the debate at the meeting centered around how we best accommodate nature and its needs on farmland in the new CAP. There is a lot to consider when deciding on a strategy that helps both farmers and wildlife).

The urgency for measures that help farmland biodiversity is increasing, with the updated Danish Red List showing that twice as many birds are now considered under threat, among them the yellowhammer. This makes it even more urgent to ensure that the new CAP is a huge advantage for wildlife conservation efforts.

All the participating organizations of the seminar did agree on one thing: The need to pay attention to farmland biodiversity, with the approach varying depending on the location and people involved. However, with 95% of the protected areas and 57% of the species in Denmark under threat, these issues need to be discussed, with the solutions put into practice on a large scale now. 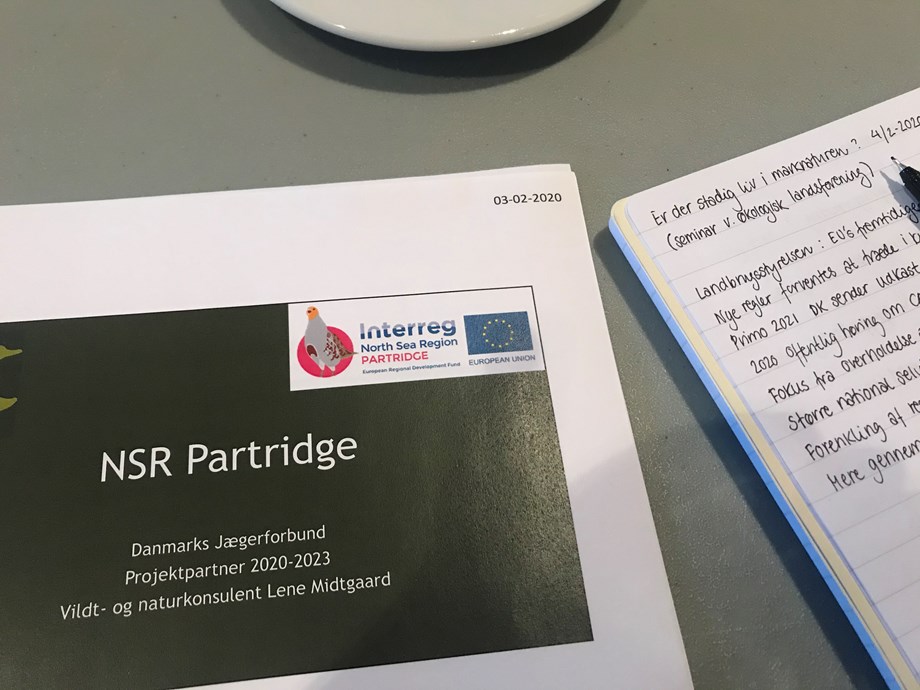 The North Sea Region PARTRIDGE project’s aim is to increase farmland biodiversity by 30% by 2023 at the majority of its 10 demonstration sites. The Grey partridge is the flagship species of the project owing to its status as an indicator of farmland biodiversity. As the grey partridge is declining rapidly in Denmark, as it is across Europe, The Danish Hunters Association is raising awareness about how to improve or create habitats for partridges. We, along with all the PARTRIDGE project partners know that when partridges thrive other farmland species also thrive.

One of the big and unanswered questions of the day was: What shall we do when even former common species like yellowhammers start to decline? I believe we can find a lot of the answers to this question in the PARTRIDGE project.

And on PARTRIDGE demonstration areas we need to nurture those “seedlings” to show a possible future with grey partridges and other farmland wildlife.