01 August 2022 - Published by Francis Buner
Skylarks like open vegetation that enables them to land, walk and fly up. Skylarks that settle in winter cereals are thought to suffer increased food shortages later in the breeding season due to the growing sward structure (Donald & Morris, 2005). Thus, it is still unclear whether the lack of suitable nesting sites or the lack of suitable foraging sites explains the seasonal fall in territory density in winter cereals (Donald, 2004). In this blog, Dr Eckhard Gottschalk shares the results of a recent PhD study, looking at this conundrum in more detail.

Manuel Püttmann’s PhD at the department of Conservation Biology, University of Göttingen undertook a detailed study on skylark breeding success, habitat use and the challenges that modern agriculture poses to the breeding ecology of skylarks in general. The PARTRIDGE demo site Diemarden was part of his project area.

The farmland in the investigated area is heterogeneous with a proportion of about 40% winter cereals and 20% sugar beet (the rest is oilseed rape, maize and others). Manuel found that the skylarks used the crops in consistent proportions throughout the breeding season: about one quarter of each foraging flight ended either in winter cereals, sugar beet, extensively-managed habitats or “others”. Despite their low availability, the extensively-managed habitats farm tracks and flower blocks were an important habitat component (receiving the highest preference index; interestingly, flower blocks just during the first half of the breeding season). Based on a total of 23 radio-tracked larks, Manuel concluded that larks with homogeneous territories containing predominantly cereals, required territories of at least 10-hecates to meet the feeding needs of their brood, while the territories of those with more heterogenic territories were on average smaller than 3 hectares.

Some skylarks were lucky to establish a territory close to a PARTIDGE flower block. Figure 1 demonstrates their habitat use: a strong preference for flower blocks, especially the annual part which was harrowed in April. 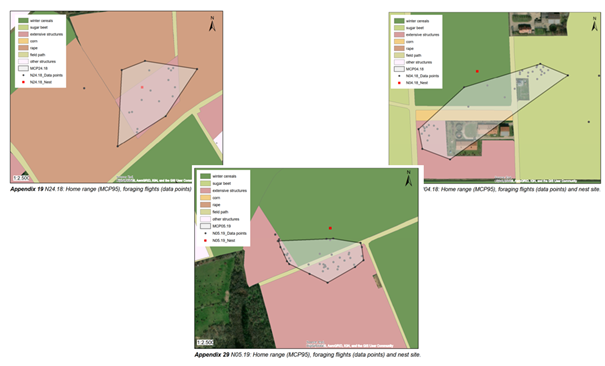 Fig. 1: Some skylarks nested (red dot) in or close to a flower block (salmon coloured rectangles). The parents in this lucky situation foraged preferably in the flower blocks and needed a comparatively smaller territory to satisfy the hunger of their brood.

However, most skylark territories did not include flower blocks, so the overall use of this structure was only at about 10% of all foraging flights.

Surprisingly, the skylarks in the project area did not suffer from decreasing food availability during the course of the season as they were even able to increase their reproduction: on average one more egg, one more chick and more foraging flights to feed their offspring for late broods (Fig 2). 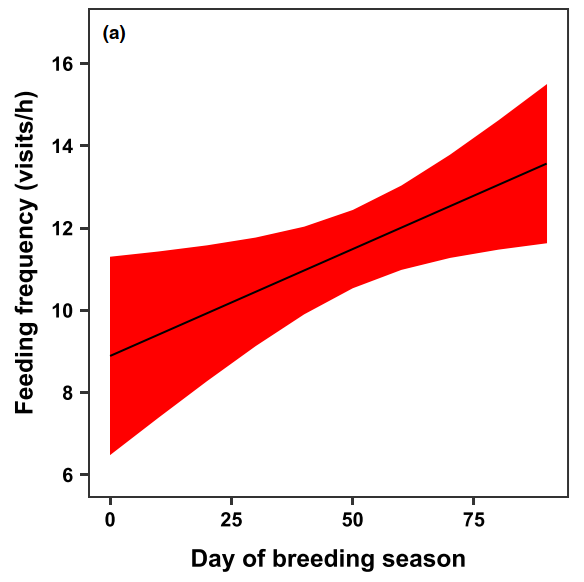 Therefore, no problems for the skylarks close to Göttingen? Unfortunately not! Nests in cereals faced an increased predation risk during the course of the breeding season: for early nests, skylarks avoided the vicinity to tramlines and other edge line structures, which can direct predators to the nest (Püttmanns et al. 2020). However, later in the season they tended to nest closer to tramlines due to reduced accessibility in the dense sward of the crops. In the breeding seasons of 2017 - 2019, 54 nests were located. In the second half of the breeding seasons, the nests were 4m closer to the next tramline compared to the first half. A nest located < 50cm to the next edge line had an 80% risk of being predated, whereas for nests further apart from tramlines predation risk was only 25%.

Obviously, suitable and safe nest sites limit the skylarks of our region rather than food availability.

Skylark plots aim for better access to foraging areas. In a study of Morris et al. (2004) only 4 of 99 nests were built in a skylark plot. For the provision of nest sites, skylarks need other measures. Manuel proposes tramline fragments without access for predators from the edge of the field. We will test that soon.

A good percentage of sugar beet in the crop rotation releases the skylarks from that pressure: this is the preferred nesting site in the second half of the breeding season.