02 May 2017 - Published by Paul Stephens
Two influential politicians paid a visit to a demonstration site for farmland wildlife recovery in Brabant, The Netherlands.

Phil Hogan, the European Commissioner for Agriculture and Rural Development and Martijn van Dam, the Dutch State Secretary on Economic Affairs, toured the site in April. 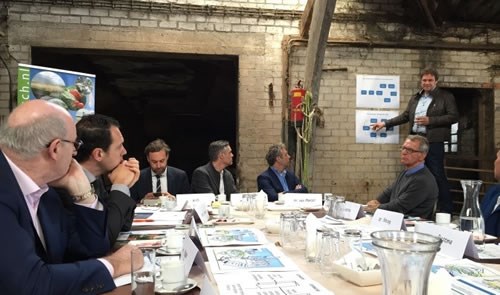 Presentation of the aims of the project

Hogan was especially interested in how collaborating neighbouring farmers (in the UK called ‘farmer clusters’, in the NL ‘farmer collectives’), foster agricultural nature conservation in the Netherlands. This includes practical demonstrations of new techniques that allow farmers, with minimum bureaucracy, to provide services to society, such as biodiversity and environmental services, for which farmers are financially compensated. Given that the NSR PARTRIDGE project demonstrates how farmland biodiversity can be recovered on modern farmland, Hogan’s visit was very fitting.

Looking at an 18-metre Partridge margin

Speakers included chairman Alex Datema of ‘BoerenNatuur’ and field coordinator of the PARTRIDGE-project Meeuwis Millenaar. After a wide-ranging and detailed discussion, the guests took a look at the sowing of an 18-metre wide Partridge margin. The margin consists of a 7.5-m strip of overwintering wheat, a 7.5-m strip sown with a wild bird mix and a 3-m fallow-strip. The management is designed to provide suitable habitat for Grey Partridges and other farmland wildlife all year round. 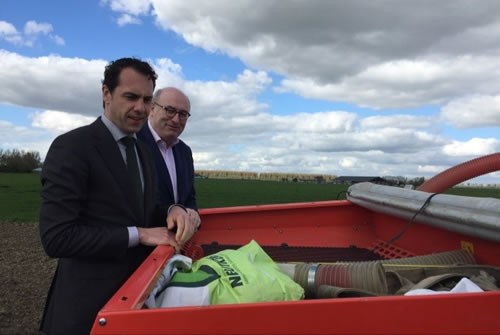 General coordinator of the PARTRIDGE demonstration site in Brabant, Jochem Sloothaak, detailed the habitat improvements established on the demonstration site, such as beetle banks and wild flower strips. The aim is to show how management tailored to the Grey Partridge can increase farmland wildlife by 30% within four years.

By Jochem Sloothak and Francis Buner