17 November 2022 - Published by Francis Buner
Balgonie estate is the prime PARTRIDGE demonstration site in Scotland. This project, funded by the EU’s North Sea Region Interreg programme, aims to show how farmland biodiversity can be supported alongside productive agriculture, by a variety of measures designed originally to benefit the grey partridge. Armed with this information, we hope to show how such measures would improve agri-environment schemes. Grey partridge counts this year at Balgonie have underlined just what an amazing success story this has been.

We began working with the farm team at Balgonie (Kingdom Farming), alongside Kings Crops and Scottish Agronomy, back in 2014 with the aim of increasing populations of grey partridge and other wildlife through targeted management interventions, primarily in the form of novel habitats. Further details of the site and its management can be found here and here, but essentially there are some key requirements we strive to provide for: safe nesting cover, insect-food for chicks, winter food (mostly a variety of seeds and other vegetation) and winter cover (protection from predators). A key part of any wildlife-management project is to assess progress: if it’s not working, adjustments to the approach should be made. This is the essence of adaptive management. Every year we assess grey partridge numbers at Balgonie as part of our adaptive management process. 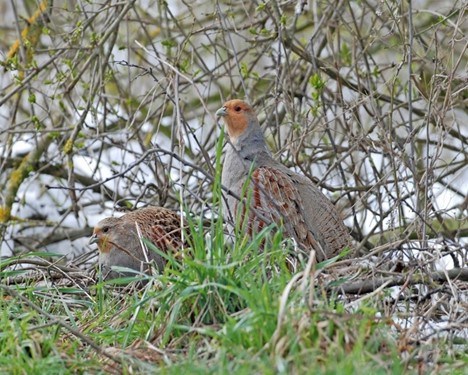 In spring, we drive around as many fields as possible counting pairs and then in autumn we record coveys (family groups, plus the odd straggler) seen in stubble fields. This provides an estimate of the breeding population (pairs) and breeding success (from the ratio of young and old birds in the coveys). If we’re doing a good job, we should see the number of pairs increase over time along with the ratio of chicks to adults, which in turn should lead to more birds in the autumn.

It is extremely satisfying to be able to say that grey partridges at Balgonie have responded fantastically to our management! Spring pairs increased by 40% over the period, 33% since PARTRIDGE began, and the autumn total by 260% (Figure 1). Compared to data from the GWCT’s Partridge Count Scheme, pair density at Balgonie is more than double the average for Scotland and likewise the autumn density is approaching three times as high. Plus, whilst the population trend over time is clearly positive at Balgonie, we know that grey partridge continue to decline nationally, with breeding populations falling by 92% since the late 1960s in the UK and by around 19% during approximately the same period as this project, according to data from the British Trust for Ornithology. 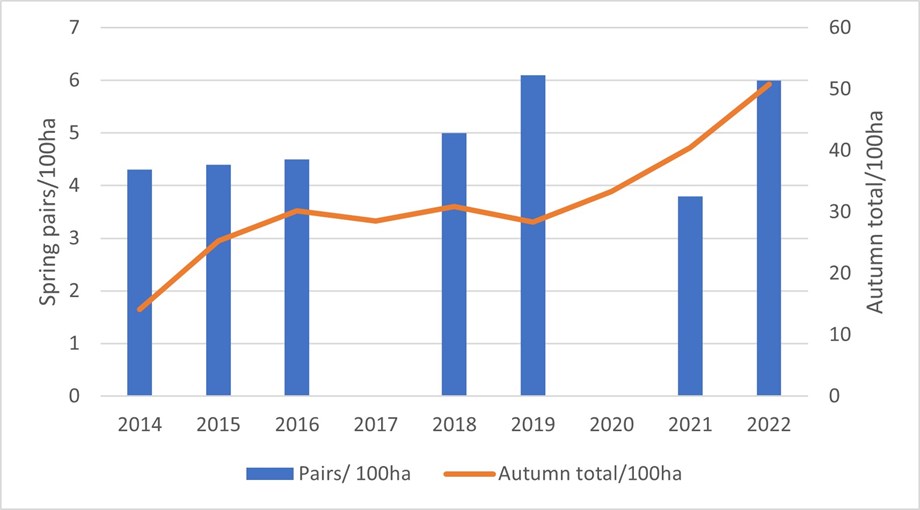 The results tell us that the habitats we manage at Balgonie have benefited the birds. They have provided additional nest sites compared to the start of the project (thus supporting more pairs) with the biggest increases in pair density occurring from around 2018 – the first year with mature PARTRIDGE measures in place. The high autumn total also suggests that more birds were surviving the breeding season and/or more chicks were being produced. Figure 2 certainly shows that the ratio of young birds to old has increased since 2014, with jumps in 2015 and again in 2017, since when the ratio remained high (i.e., more young birds relative to old). Again, these particular increases coincided with major habitat interventions, with the first set of cover crops in place from 2015, supplemented by PARTRIDGE flower blocks in 2018, suggesting they also provide a good source of food-rich cover for broods to forage in. Incidentally, research suggests that a young-to-old ratio of around 1.6 is required to maintain a stable population, all else being equal, meaning that in all but one year Balgonie has been above this crucial threshold. 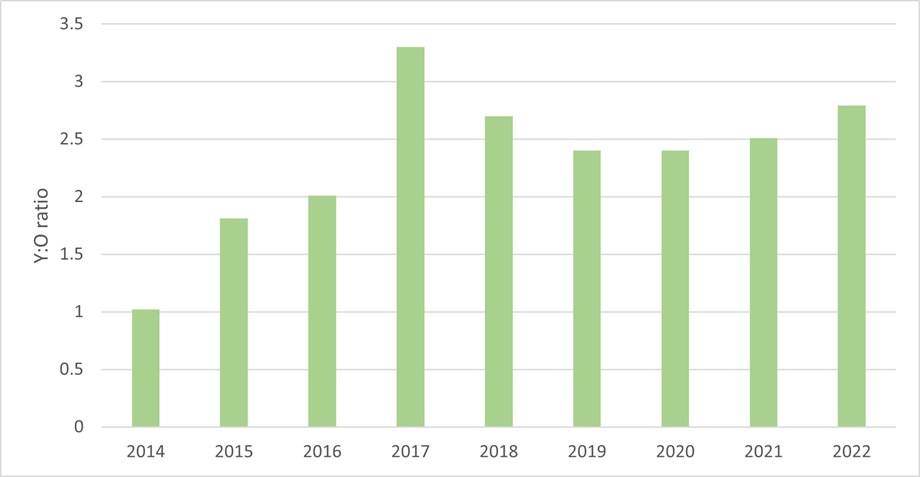 Figure 2. The ratio of young to old grey partridge at Balgonie, 2014-2022. A figure of greater than one means that more young were counted than adult birds

The results from Balgonie are extremely encouraging and strongly suggest that the local grey partridge population has increased in response to the conservation measures implemented on site. All the habitat management work on site was supported by the Interreg Programme and Balgonie Estates, and should be a source of inspiration for other farmers because it shows that a lot can be achieved with careful planning, diligent execution and (hint, hint to the Scottish Government…) appropriate financial support through agri-environment schemes. We will keep working with our local partners to further enhance farmland wildlife at Balgonie and make our findings available to policy makers and practitioners. If anyone would like to visit Balgonie, please get in touch (ftorrance@gwct.org.uk). 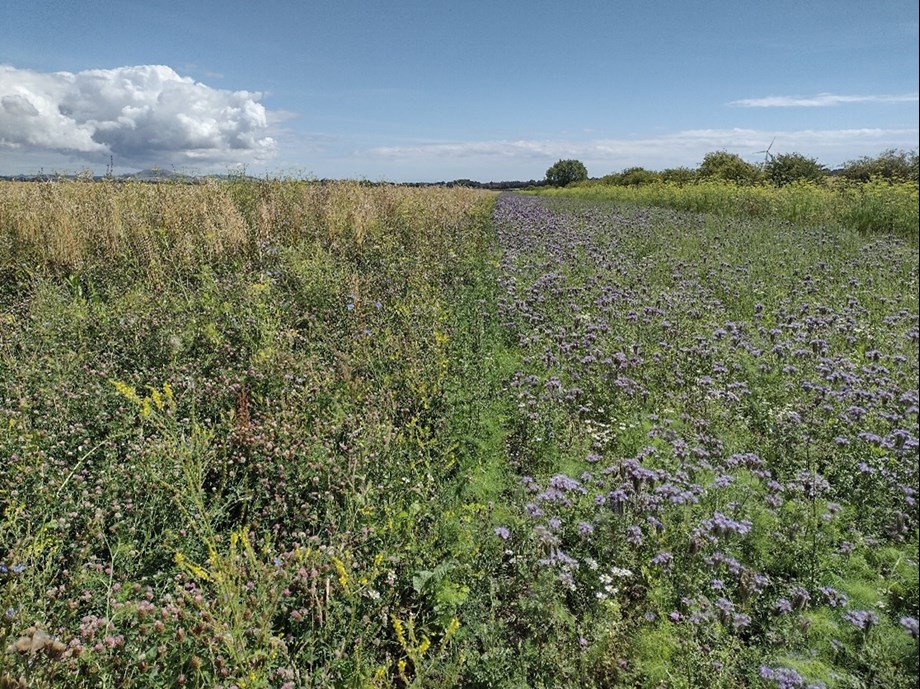 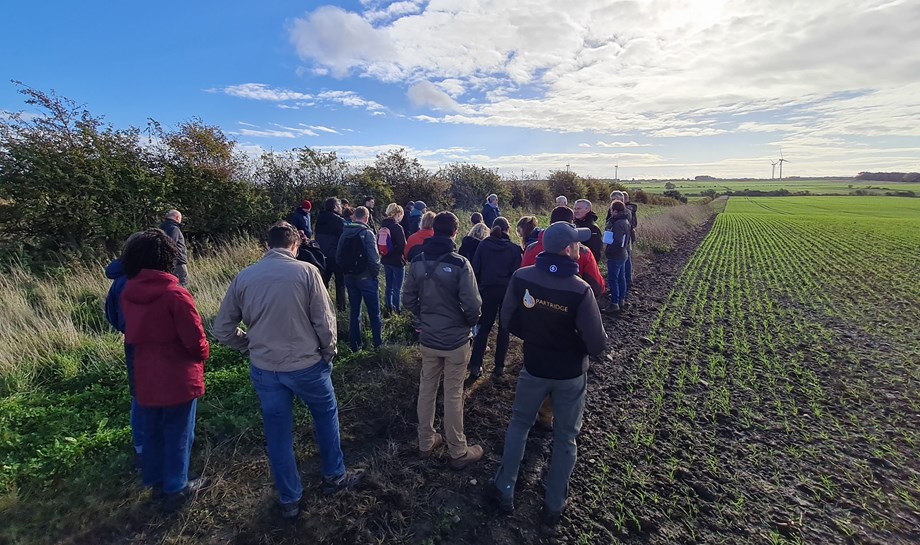 Written by Dave Parish and edited by Fiona Torrance