The winning photo in the category ‘a greener North Sea Region’, shows a very proud Dutch PARTRIDGE project farming couple behind the first ever Marsh Harrier nest on their farm. The successful brood of this red-listed farmland bird is undoubtably the result of the PARTRIDGE measures the project installed on this farm and across the other project farms at the Oude Doorn demo site since 2017. 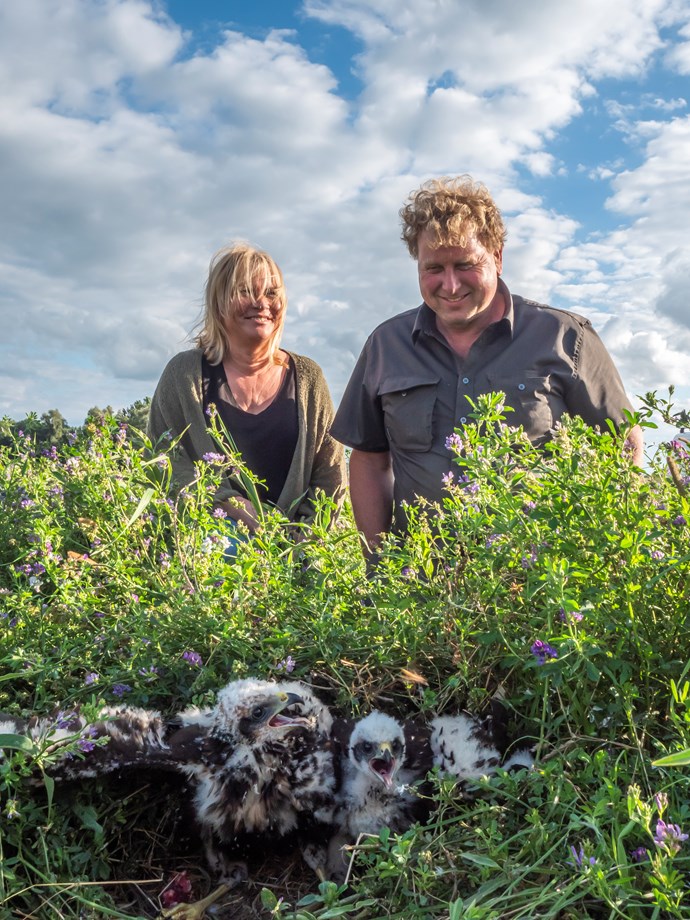 It surely cannot be taken for granted that farmers are proud of the wildlife that live on their land. There are of course thousands of nature-friendly farmers across the North Sea Region, but they are almost certainly still a minority. Historically, farming is more of a struggle against nature than farming with nature. Over hundreds of years most natural areas in Europe have been converted into agricultural land to produce food for a growing human population. Yet, every serious farmer has an interest in healthy soils and clean water. And at the heart of these farmers is their love for everything that grows and flourishes on their land.

The PARTRIDGE project advices and helps open-minded and modern farmers such as Rens and Gabrielle Kolff from the province of Brabant in the Netherlands, to develop their farm in a nature-friendly way, where farming for food coexists with protecting farmland wildlife. PARTRIDGE also provides these participating farmers with a platform to show off their pride in this work. There is their pride for high crop yields of course, but also their pride in the natural gains that may be harvested alongside feeding the world.

The Kolff family have received a huge wildlife boost after four years of participating in PARTRIDGE habitat improvements on their farm. The reward is a red-listed Marsh Harrier pair that successfully raised a brood in one of their floristically-enhanced pastures, that was converted from a previous lucerne field. This was the first time in their living memory. Rens found the nest with his son Sebastiaan while mowing the pasture for hay to feed his cattle herd. Volunteers had been observing the harriers in the area for weeks, thinking that there was a nest close by, so Rens payed extra attention as he mowed. He said: ‘It was an absolutely wonderful moment to be face-to-face with three such large rare raptor chicks and a big compliment to our efforts to boost biodiversity in our area together with our neighbouring farmer friends’.