04 December 2017 - Published by Paul Stephens
The most important habitat requirement of partridges is for unsprayed, insect-rich vegetation of herbs or grasses that provide the right structure for nesting, chick rearing and all year cover. The species composition of the vegetation is not as relevant as structure. So very different types of seed mixes can be used to meet the needs of partridges.

Some farmers at our PARTRIDGE project areas in Diemarden and Nesselröden have difficulties working on fields in the spring, when clay soils can be very heavy and wet. Therefore, they prefer autumn sowing for new flower blocks. We have developed the “Göttingen Mix” for spring sowing, as it contains many annual, frost sensitive species, as sun flower, Phacelia, buckwheat, linseed etc. To allow for autumn sowing a revised mix is needed that will include hardy plant species.

Recently, there has been some criticism of flower block seed mixes by entomologists in Germany and other parts of Europe, as they are mainly composed of introduced crop plants, instead of native species. Insects such as wild bees have very specific requirements when it comes to their food plants, so entomologists think that a native mix would provide better food resources for insects. The botanists of the Authority for Nature Conservation of Lower Saxony for example, avoided including native species in flower strip mixes. They were concerned about potential negative impacts on local wild native plant populations due to the use of seeds that were not sourced locally. This could lead to genetic contamination, in particular with timing of germination as plants adapted from horticultural propagation have been selected to germinate at the same time, compared to the more heterogeneous germination seen in the wild.

Obviously, the views of zoologists and botanists can be quite different.

Composition of the new mix

Within the PARTRIDGE project we are free to use our own seed mixes without considering the directives of agri-environment schemes (AES). We took the opportunity to create a new seed mix for autumn sowing composed mostly of native species. Additionally, we chose a seed supplier who offers seeds of local genetic origin for each of the regions in Germany.

Our calculations for the mix (Table 1) considered two things:

We had already asked farmers to agree to the inclusion of two “weed” species (poppy - Papaver rhoeas - and cornflower) in the mix.

Fig. 1: Composition of the new mix; the larger seeds are Isatis (woad) and Pastinaca (wild parsnip).

We decided to choose a very low sowing density of 3 kg/hectare for the following reasons:

Farmers might have difficulties spreading 3 kg over one hectare. We therefore diluted the mix by the same amount of linseed (50% mix, 50% linseed). That means 6 kg/hectare of the linseed diluted mix can be sown. This compares to the conventional sowing of oilseed rape at 2-6 kg/hectare.

The price for the seed mix to sow one hectare is 192 € (linseed included). 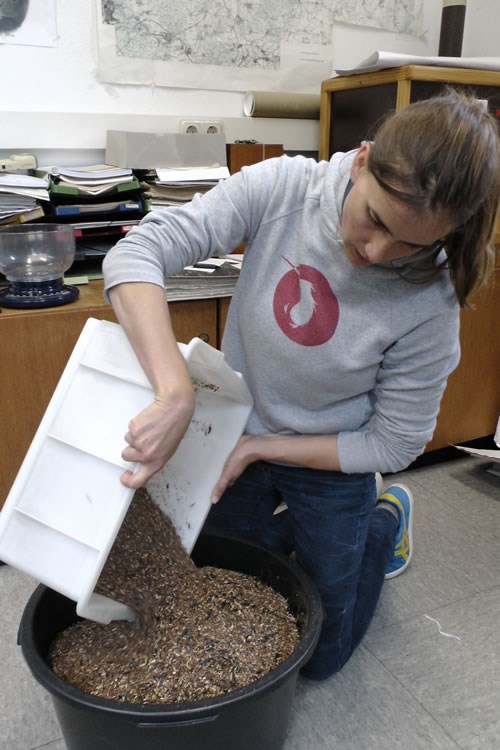