PARTRIDGE partners meet at Loddington with farmers from Europe

Last week saw the fourth meeting of an international collaboration working to improve farmland biodiversity across Europe. The GWCT is leading the North Sea Interreg PARTRIDGE project, a collaboration of partners from Belgium, the Netherlands, Germany and the UK.

This meeting showed the true meaning of international collaboration. After reports from all the partners regarding their progress since the last meeting, there was a general sharing of advice, support, and discussion of the best approaches to solve the variety of problems that had arisen. Despite the different conditions faced, and variety of opinions held, the meeting had a feeling of teamwork, friendship and support.

As the project is still in its first year, the implementation of conservation measures on the ground is ongoing and a challenge. Most demonstration sites have many farmers to approach, negotiate with, and then work with successfully, but this process is succeeding, and the amount of land managed as grey partridge habitat is increasing.

Many sites are already over the 7% target and the others are steadily increasing. The next step is to show whether this conservation management has the expected benefits for grey partridges and other farmland biodiversity. The project will soon move on to the next stage – monitoring.

Monitoring is a critical, and very complex, process. It is the method by which the partners will measure the results of their efforts. Gathering and recording high quality data, which can be centrally analysed between multiple organisations across four countries, is a huge task. Especially when data is collected by volunteers, hunters and scientists. 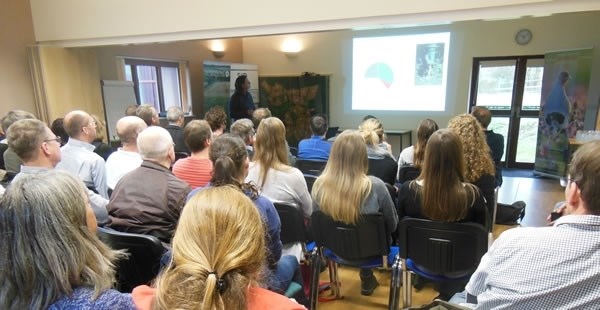 Detailed data collection discussions at the meeting helped to smooth out some of the potential issues, showing the importance of face-to-face discussions involving all partners. This attention to detail by all parties early on will pay dividends later when it comes to ease of analysis, and the results of this impressive project will be all the stronger for it.

The two-day meeting was followed by a field visit to the GWCT’s flagship Allerton Project demonstration farm at Loddington (one of the 10 demonstration sites of PARTRIDGE) and a visit to RSPB’s Hope farm in Cambridgeshire.

The focus was on habitats promoted and implemented across the PARTRIDGE demonstration sites such as partridge-tailored wild bird seed mixes, beetle banks, floristically-enhanced grass margins, winter stubbles, cover crops and hedgerows. The Dutch and Belgian farmers were particularly interested in beetle banks, as they introduced the first examples in the Netherlands this spring, with the first ones in Belgium to be established this winter.

Supplementary winter feeding during the hungry winter gap and predation management were also discussed among the international participants.  Opinions varied widely as to how much these measures should or can be used depending on national legislation and public opinion.

The future of farming and agricultural policy both across Europe and post-Brexit in Britain were a hot topic of conversation over the four days. Harold Makant from Natural England summed up some of the conversation: “Payments are currently based on a loss of agricultural income. Maybe for the future we should pay by results but at the moment it is difficult to measure quality across the different farms. A lot of the current wild bird seed mixes are put on poor ground, so we need to encourage farmers to establish them on better more productive areas, especially as they are receiving payments to implement them. Over the years farmers’ attitudes in the UK and elsewhere have shifted and they are proud to see wildlife flourishing on their farms, but they do need payments to implement these habitat changes.”

As the first year of the project draws to a close we can reflect on some early successes, in particular the exceptional uptake of high-quality habitat measures on almost all ten 500 ha demonstration sites.

By using science-based management plans and a bottom-up approach we're involving not only farmers but also hunters, conservationists, the general public and Government agencies. This has resulted in the creation of habitat improvements that significantly exceed levels typical of current agri-environmental schemes across the North Sea Region.

A weakness of current schemes is the lack of available in-depth advice for farmers and a failure to encourage other local stakeholders to be part of the implemented management plans. At most of our project sites we seem to have managed to ignite a sense of ‘pride’ for partridge-friendly farming.

PARTRIDGE also encourages cross-border visits for all the stakeholders involved in the project, and the attendance of around 20 farmers, hunters and conservationists from our European project sites at these meetings is credit to their enthusiasm for the PARTRIDGE project.