PARTRIDGE flower blocks are great news for insects on farmland

09 March 2020 - Published by Francis Buner
The initial results of the Game & Wildlife Conservation Trust's (GWCT) insect survey from the summer of 2019 found that the experimental flower blocks farmers established as part of the PARTRIDGE project contain numerous insects that partridge chicks like to eat. The results demonstrate that sown flower blocks can be a suitable management measure to help restore partridge numbers of a local area.

The PARTRIDGE project is a collaboration of partners from England, Scotland, Belgium, Germany, Netherlands, Denmark and Sweden who aim to increase biodiversity by 30% using the Grey partridge (Perdix perdix) as a key indicator. To help achieve this ambitious goal, high-quality conservation measures have been implemented on at 7% of the farmed land at all 500-ha demonstration sites; these measures include PARTRIDGE flower blocks. The flower blocks are sown by local farmers in plots from 1 to 1.5 ha in size across the demonstration areas, with a specific partridge-friendly flower mixture that is managed in alternate years. 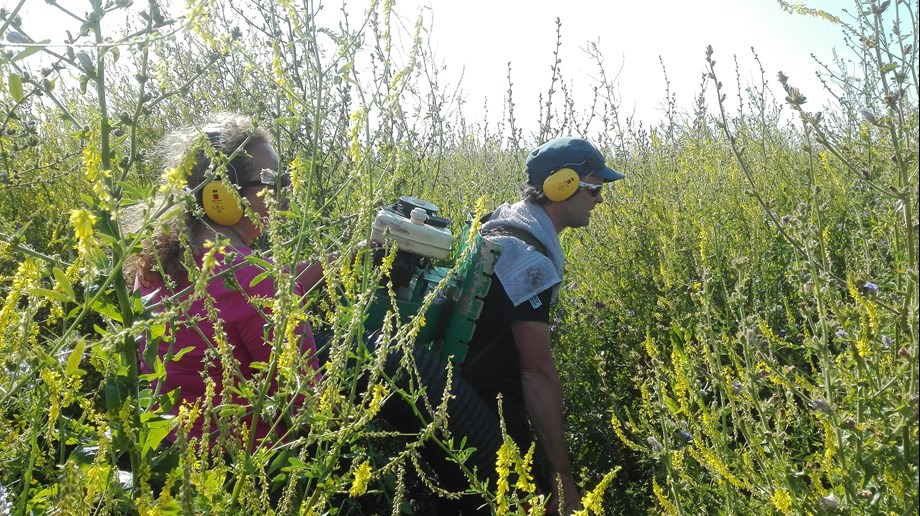 Insect D-vac sampling at the PARTRIDGE Assenede demonstration area in East Flanders, Belgium. There, the second-year aspect of the PARTRIDGE flower mix was dominated by sweet clover and chicory. © Agrobeheercentre Eco², 2019

The changing fortunes of biodiversity in the demonstration areas are measured by the countries’ partners through monitoring numbers of partridges, hares, songbirds and insects. These figures are then compared to those of a similarly farmed reference area, where no additional efforts are made to provide high quality conservation habitats. In this way, it is possible to identify the impact of the management measures (flower blocks, beetle banks and other habitats under agri-environment scheme agreements) on biodiversity, allowing the partners to further refine management measures. It is predicted that the habitat provision will ensure the project achieves its goal to increase biodiversity by 30% by 2023.

In addition to the normal monitoring, the Game & Wildlife Conservation Trust (GWCT), the English lead partner in the PARTRIDGE project, carried out a pilot insect survey in three out of the 10 demo areas in the summer of 2019: Rotherfield (UK), Oude Doorn (NL) and Assenede (BE). For this purpose, D-vac insect samples were taken in the flower blocks and nearby winter wheat fields (in each sampled habitat plot five standardised D-Vac samples were taken). The preliminary results clearly show that the flower blocks contain more insects than the winter wheat crops in all three demo areas. The flower blocks are having a positive effect on insect numbers regardless of the country, despite different weather and soil conditions in the three countries sampled. The number and the type of insects in the flower blocks appear to be sufficient to provide food resources for grey partridge chicks.  Earlier work in England has led to the construction of the Chick Food Index (CFI) – which allows researchers to determine if insect numbers are enough to maintain grey partridge numbers (Potts and Aebischer 1991).  On average, the flower blocks in the three demonstration areas exceeded a CFI value of 0.7 – the value needed to provide enough food for chicks to maintain grey partridge numbers. 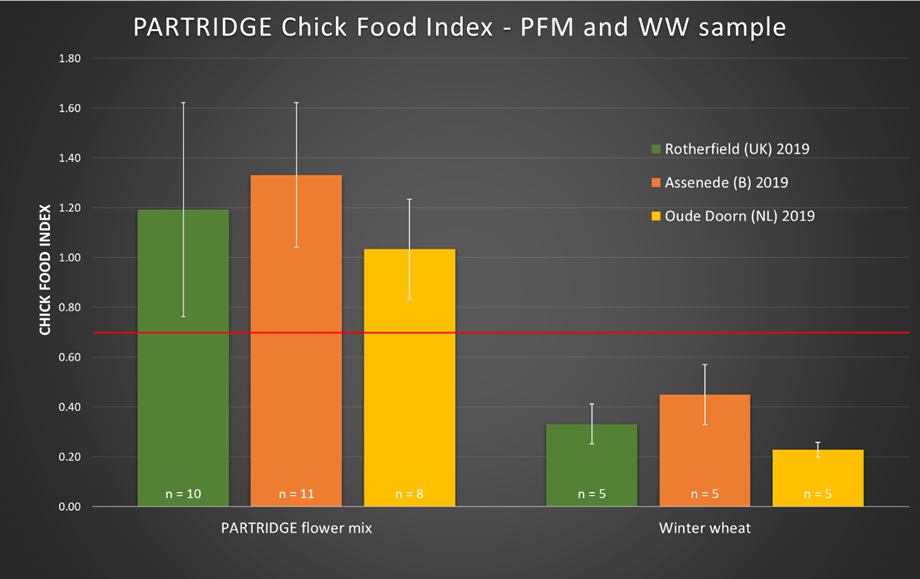 The graph above shows the average CFI or Chick Food Index from the PARTRIDGE flower blocks for each of the three sampled demo sites, compared to that in winter wheat fields sampled at the same areas.  The red line indicates the level needed to supply sufficient food for grey partridge chicks and maintain partridge numbers. © Game & Wildlife Conservation Trust, 2020 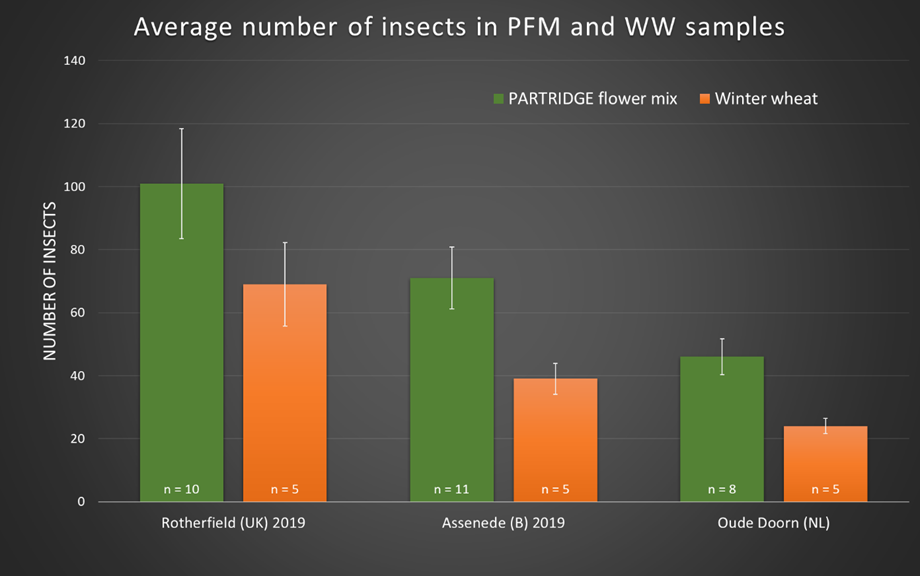 The graph above shows the average number of insects in the PARTRIDGE flower blocks compared to samples taken in winter wheat per researched demo area. © Game&Wildlife Conservation Trust, 2020

These initial results indicate the positive effects of the PARTRIDGE flower blocks and their suitability as a management measure to restore grey partridge numbers locally. Although it should also be mentioned that accessibility, i.e. the extent to which partridges and other arable birds can move through the flowery vegetation, also plays an important role in the suitability of these flower blocks as a partridge-friendly management measure.

Since 2018, thanks to the efforts of local farmers, the 500-hectare demo area has largely achieved the objective of building at least 7% partridge-friendly habitat, which according to various scientific sources is the minimum area for restoring the partridge population and increasing biodiversity in the agricultural area . The above results are a hopeful sign that we can achieve this biodiversity increase also in practice!