PARTRIDGE flower blocks are attractive for Skylarks and Partridges

29 January 2018 - Published by Paul Stephens
The PARTRIDGE flower blocks, half of which are cultivated in spring while the other half remain untouched, are proving not only to be attractive for grey partridge, but to a wide variety of other farmland bird species too.

During an investigation on skylarks, Manuel Püttmanns (Department for conservation biology, university of Göttingen in Germany) recorded the foraging behaviour of a skylark pair that was breeding in one of the PARTRIDGE flower blocks. The pair used almost the entirety of the large flower block for foraging which demonstrates the importance of this habitat measure.

The nest was situated at the edge of the flower block which was surrounded by a wheat field (see photo). It was evident that the pair of Skylarks highly favored the insect-rich and well-structured vegetation, which provides all the necessary conditions for the breeding season. Interestingly the larks did not only forage in the annual type of vegetation but also in the area which remained untouched by cultivation in spring. This particular flower block has been cultivated for 14 years in this form. In time, a clear heterogeneity of vegetation has set in. The flower block has not been fertilized during that time, so even in the established and undisturbed vegetation some areas are open enough for skylarks. 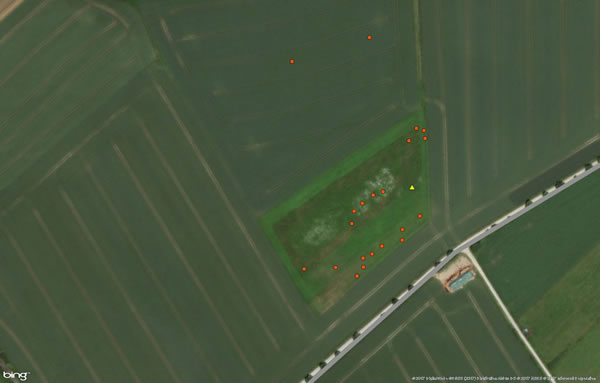 Skylark Nest (yellow) and areas where the pair of skylarks landed for foraging (red) during June 2017. The majority of foraging activity was found to be in the PARTRIDGE flower block

The pair of larks showed a very similar habitat use pattern as a pair of radio-tagged partridges. The partridge pair bred in the same flower block a few years previous and were successful in raising chicks there. The partridges barely left the insect-rich area with the chicks and occasionally stayed at the edge, in between the crop and the PARTRIDGE flower block.

Although our data remains anecdotal at this stage of our research project, the skylark data demonstrates that the partridge is an excellent target species for the recovery of farmland biodiversity, because the measures implemented specifically for the grey partridge also benefit other threatened farmland bird species too.