18 May 2018 - Published by Paul Stephens
Last week, the first new parcels in the Isabellapolder demonstration site were sown with the PARTRIDGE flower mix.

In the PARTRIDGE project, we are working together with the local farmers to provide 7% high quality habitat, tailored towards the grey partridge in which other farmland birds will benefit from in the demonstration sites. To achieve this, we have used some experimental agri-environmental measures. One of these measures is the use of 1-ha flower blocks at suitable locations in the field. The Isabellapolder demo site is a flat and open landscape so the extra cover, provided by the PARTRIDGE flower mix, is a welcome and valuable measure for the grey partridge and other farmland birds. Additionally, the PARTRIDGE flower mix also provides food in both summer (insects) and winter (seeds) as well as nesting habitat. It is a two-year flower mix of which 50% will be re-sown each year. 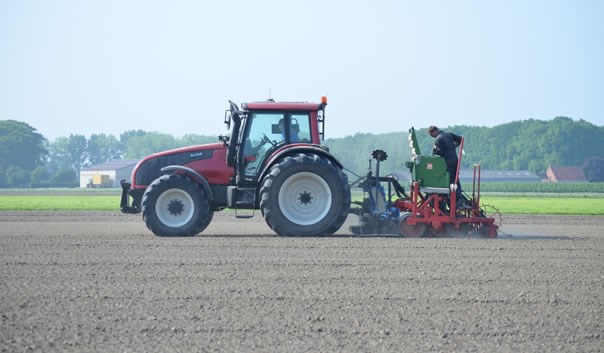 So far, 10% of the 500 ha at Isabellapolder demo site is of high quality habitat. Specifically, this consists of 18 hectares of the PARTRIDGE flower mix, supplemented with the regular agri-environmental measures of the Flemish Land Agency (VLM) such as wild bird seed mixes and grass margins. In the coming months, two beetle banks will also be constructed. Beetle banks are an important measure as they provide overwintering habitats for insects which are a food source for farmland birds, such as grey partridge chicks. They also serve as nesting habitat for ground nesting farmland birds like the grey partridge. We are cautiously optimistic that all these measures will result in an increase of the grey partridge population and an overall increase of farmland biodiversity of up to 30% by the end of the project in 2020.